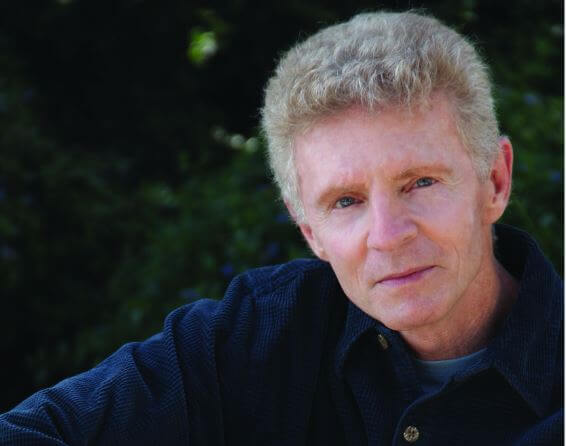 You may or may not have heard of Billy Hayes, but you are probably familiar with his story. He is the subject of the movie “Midnight Express” adapted by Oliver Stone in 1978 from Hayes’ 1977 autobiographical book detailing his incarceration in a Turkish prison for smuggling two kilos of hashish out of the country and his subsequent escape five years later.

Over the next few months, Hayes will be sharing his story, Tales of Billy Hayes: Cannabis Activist, during several presentations at the Las Vegas-Clark County Library District (January 12, 2 p.m. at West Charleston Library; February 20, 6 p.m. at Sahara West Library; and March 14, 2 p.m., at Windmill Library). Dr. Scott Jacobson, medical director of Wishing Wellness, will also be at the presentations to offer his expertise in the use of cannabis to manage illness, as well a representative from Shango Marijuana Dispensary will be on hand.

Hayes has transcended several generations as an author, actor, and director and I was fortunate to have the opportunity to sit down with him to chat about a few of his tales firsthand.

Guy Bertuzzi: Let’s begin with a “what if” situation. You have built your entire career as a writer, speaker, and actor based on your imprisonment in Turkey for smuggling hashish and detailing it. If it was possible, would you warn your younger self about smuggling to avoid going to prison, or would you let it play out as it did?

Billy Hayes: Getting sentenced to life in a Turkish prison was the worst and the best thing that ever happened to me. It forced me to grow up and take responsibility for my actions, to learn about strengths and weaknesses, and discover my reason for being. I got my books published and met my wife at Cannes when the movie premiered there in 1978. But looking back, I wouldn’t have listened to any advice from my older, wiser self—I was young and invincible. It was only when the sky fell on my head that the true stupidity and selfishness of my actions became apparent. Not only had I f%$ked up my own life, but I’d put all the people who loved me in jail. Mom went to sleep every night with pain in her heart for her son so far away. Dad had to deal with the public shame and humiliation. This was the worst part of prison for me.

GB: Had you ever smuggled hashish out of Turkey before you got caught or was it the first time?

BH: I’d made three successful hash smuggling trips prior to getting arrested in October 1970. The first time was April 1969 when I taped two kilos of prime Turkish hash plaques around my leg, wrapped plaster tape around that to form a rough but beautiful white cast, then just clomped through customs in Istanbul and New York. My second trip was October 1969 when I taped two kilos around my body and jumped on the fabled Orient Express train, chugging west across Europe toward Paris. By my third trip in April 1970, I was so confident that I just taped the two kilos under my arms and strolled straight onto the Pan Am jet. Ah, the idiotic boldness of youth.

GB: Hindsight is always 20/20, what would you have done differently as you prepared to leave Turkey to travel back to the U.S. prior to that fateful trip?

GB: I recall you receiving a hash pipe in prison. What was consumption like in a Turkish prison?

BH: Prison is literally a captive market, and everyone is looking for some form of escape. The demand for hash was met by various prison gangs in coordination with the appropriate guards. And while the demand was always there, the supply varied radically, depending upon the season, the political winds, and factors beyond the ken of lowly prisoners. There could be a flood of great hash or a drought. And it certainly took the edge off your high, knowing that the little piece of hash in your pocket could lead to more legal penalties and a nasty trip to the cellar for a beating with the falaka stick. But I did learn how to make a hash pipe from a chicken bone and you never know when that might come in handy.

GB: Did your experience in prison turn you off to

BH: My prison experience didn’t turn me off to cannabis, but it sharpened to a point for me the political ramifications of the War on Drugs. Especially when the Turkish government responded to Nixon’s pressure to increase their penalties and, instead of going free, I was suddenly retried and sentenced to life in prison. It’s a great satisfaction and joy to see this new cannabis world moving toward legalization and a fuller awareness of the incredible healing potential of this amazing plant.

GB: I’ve seen your influence on people who have seen the movie or read the book, they commonly say that your story changed their life. How do you feel knowing your suffering helped others?

BH: I’m grateful and humbled that my tale of struggle and eventual triumph has affected so many people, brought them some inspiration and hope. Everyone’s been down in a dark place at some time, struggling to find their light, and if my story helps them then it balances my karmic scale.

GB: When comparing your autobiography and the movie, what are some of the main discrepancies that should be clarified?

BH: Writer Oliver Stone and director Alan Parker took some artistic liberties with my book. The escape in the film was rather simplistic, with me killing a guard (which I didn’t do) and skipping out the door. In actuality, I escaped off an island prison in a storm, rowed 17 miles to the shore of Asia Minor, and spent the next three days running through Turkey. I dyed my hair in an Istanbul hotel room, and finally swam across the Maritas river into Greece and freedom. It was an escape seemingly made for Hollywood, but they didn’t do it.

My main problem though is with the courtroom scene, where my character curses out the nation of Turkey and vows to f$%k all their sons and daughters. What I actually said to the court was that I couldn’t agree with them, all I could do was forgive them. Film is an incredibly powerful medium, and that scene inflamed worldwide audiences against the Turks and, of course, the Turks against the character they saw on the screen. Turkey issued an Interpol warrant for my arrest that stood for the next 20 years.

GB: Remakes and reboots are very much a part of our current culture in cinema. Would you like to see them remake the movie?

BH: There have been discussions about a remake for years. We’re now talking with some people about a 5-part 10-hour mini-series starting in the late ‘60s with the first three trips, then the bust on the fourth trip, prison, and the real escape. And while prison was strange, coming home into a media storm and becoming a minor celebrity was really bizarre. We shall see…

GB: Who would you like to see play you?

BH: I don’t know who would play me, but Aaron Paul

GB: After your experience in Turkey, do you feel any inclination to become an advocate for cannabis either in the US or Turkey? Or did you decide it was just better to leave it all there?

BH: I’ve done thousands of TV, radio, and newspaper interviews and speeches at colleges and high schools over the years, each one yet another chance to propound on the insanity and hypocrisy of the monumentally failed War on Drugs and demand an end to putting our kids in prison for pot. Legalization is an idea whose time has come, both here and around the world.

GB: You eventually returned to Turkey. Why did you want to

BH: Going back to Istanbul in 2007 was the fulfillment of a dream I’d had about closing the circle and finding peace with the Turkish people. It was an amazing experience, all documented in “Midnight Return—the Story of Billy Hayes and Turkey.”

GB: Were your aspirations always to have a career in the entertainment industry as an actor/director or did that happen as a result of a movie being made about you?

BH: I’d always wanted to be a writer and studied journalism at Marquette University in the ‘60s. A large part of my smuggling motivation was the sheer adventure of it all—I wanted to experience life to the fullest so I could write about it. Well, surprise, surprise, be careful what you wish for. All the media interaction upon returning home led me into acting, where I met a brilliantly mad teacher, Eric Morris, whose work became the therapy I so desperately needed.

GB: You followed up your autobiography with the sequel books “Midnight Return (Escaping Midnight Express)” and “The Midnight Express Letters - from a Turkish Prison, 1970-1975.” Do you prefer writing over acting?

BH: I’ve always loved words and the magical agony of the writing process. But it’s lonely and the feedback loop is slow in coming. Acting, especially on stage, is immediate feedback and a desperate high wire act that thrills me.

GB: After what you went through trying to smuggle hashish, how do you feel about living in Las Vegas now that all forms of cannabis are legal and readily available if you are 21 or over?

BH: Well, it’s about f$%king time! Truth is I always thought I’d see this day, but it’s been such a long time coming and there are hundreds of thousands of cannabis prisoners and their suffering families still behind bars as I write these words. And I hope I never get used to walking into a dispensary and having my mind blown by the very idea of a cannabis store, much less the plants all whispering to me: Billy, Billy…

GB: Tell us a little bit about what audiences should expect from your talk, Tales of Billy Hayes: Cannabis Activist, being presented at the Library District over the next several months.

BH: This will be a discussion about cannabis, from prohibition to wellness. I’ll discuss the prohibition part and Dr. Scott Jacobson, an expert in cannabis healing, will talk about the wellness part. We look forward to a Q&A with the audience and sharing stories and information about this amazing plant. I wish my Dad was still around, the look on his face would be priceless.