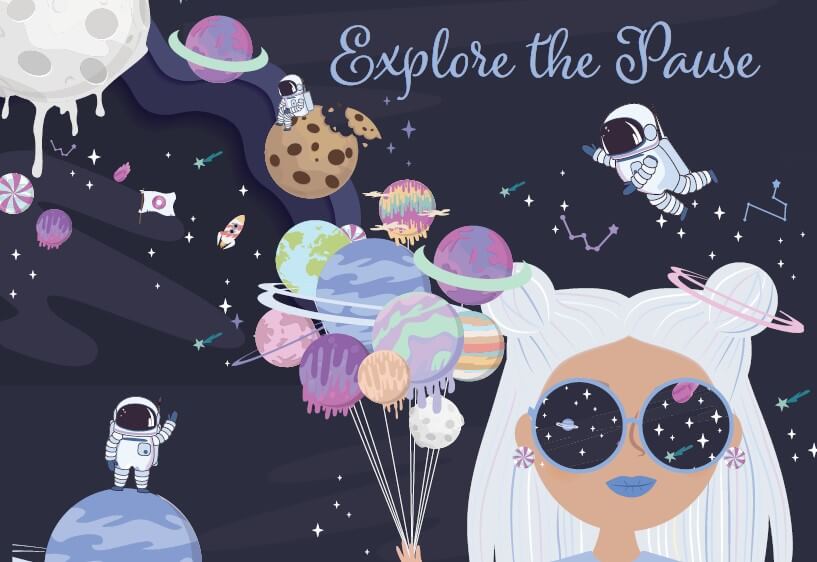 Pandemic lifestyle offers opportunity to reevaluate the art of doing nothing

Pandemic lifestyle offers opportunity to reevaluate the art of doing nothing

Where once I heard the clickety-clack, clickety-clack of the commuter train, its whistle blaring the end of another hour passed, now I hear the shrill of sirens. Where once I heard children laughing and playing outdoors, now I hear the bark of a lone dog. The boom, boom, boom of music pulsating through car windows has been replaced with the “walk-don’t walk” of a crossing light speaking to no one.

The world has grown quieter. As though a blanket has been draped over the planet. A thick, snow-like blanket that at times feels comforting and protective but mostly feels restrictive and suffocating. It’s as if, after struggling to awaken, that blanket has wrapped itself around my legs like a twisted nightgown except I’m not sleeping.

Over the course of several years, I regularly embarked upon self-improvement and personal evolutionary journeys such as “The Celestine Prophecy” and “The Writer’s Way.” One such book entitled “Pause” I found boring and irrelevant. None of it felt applicable to me. I just wasn’t that interested in “pausing.” I enjoyed being busy. I proudly showed off my Franklin day planner to those who commented on how harried and taxing my life appeared as a medicinal-chef and writer. The many activities I bounced to and from on any given day gave me a feeling of productivity and progress. But things have changed.

It was early March when I was suddenly forced to pause. News reports told of some virus spreading in another part of the world. I wasn’t yet terribly concerned. I went about my life then at day’s end plopped down on the couch, grabbed a blunt and took it all in with a grain of salt, or more accurately, a bowl of canna-chips.

The reports grew more frequent, dominating the news. The contagion was spreading. I paid more attention. Especially after receiving an email from one of the entities I teach for announcing all classes scheduled for the remainder of March were cancelled. Two days later an-other company I work for sent an email cancelling classes. I noted a slight tightening in my stomach glancing over at the checkbook sitting on my desk. But took solace in my upcoming personal chef gigs.

Two weeks later came final notification: All Cooking Classes Are On Hold; Indefinitely. Then one by one, the cancellation of my other scheduled events. All just washed away. Now I was frightened, realizing a tidal wave of what was known as coronavirus was moving across oceans, deserts and mountains with the speed of a peregrine falcon. I shifted my focus.

There was plenty for me to do during this “hiatus.” A kind of early spring cleaning. I would use the unexpected free time to organize recipes according to seasons and cuisine, catch up on paperwork I usually avoid and clean the garage. Surely this would all be under control soon and I’d be back to work. But nothing was under control.

Every news cycle informed and dismayed. Things grew worse. More and more people were dying. I felt as though I was living a version of the Black Plague mixed with the Great Depression. I thought about my grandparents. I decided to do things the way I envisioned they had, based upon stories they told and evidenced in the way they lived. I baked bread, boiled water for drinking, made my own butter. I turned into a regular “Little House on the Prairie” woman.

But my enthusiasm began to wane. It became more challenging to prepare even these basics. Ingredients that had always been readily available were no longer so easily found. Store shelves with gaping holes and wide-open spaces lacked yeast, sugar even flour. The discovery made only after standing in line, waiting to enter the market for 30 minutes or more. I reminded myself at least it wasn’t the kind of food line my grandparents stood in. The downward slide continued.

I watched as restaurants I frequented emptied. My peers who once swiftly moved about kitchens calling out orders now sat in front of laptops laboriously engaged in the mind-numbing process of applying for unemployment; myself included. We found ourselves entangled in a minutia of cyber lines and overloaded servers. Servers, the word sticks in my throat as I think of those who used to carry food I prepared to tables of customers. My insides became a simmering concoction of fear, frustration and anger.

Hair salons and barbershops swept up the last bits of hair and covered their shampoo bowls. Then like so many other businesses, posted “Sorry Due To Covid-19 We Are Closed” signs written in fiery red marker on pieces of torn cardboard. It was spooky to see office buildings suddenly void of sound or movement while hospitals filled

to overflowing becoming a veritable cacophony of pain and sadness.

Yet the world grew quieter; muffled behind masks. Initially, masks and other protective gear were reserved for those in the medical field or in jobs considered “essential.” Now, we are all encouraged to wear masks whenever venturing out. I smile at the more creative masks I’ve seen expressing the individuality and interests of those behind them. Masks with skulls sewed into them, flower designs and sports teams. I’d like a mask with images of food or better yet cannabis leaves!

The world over has been encouraged to adopt an almost obsessive-compulsive approach to handwashing. Along with constant reminders to not touch our faces. Recently I was enjoying a bowl of my homemade tomato soup prepared with heirloom San Marzano tomatoes and enriched with canna-butter when I reached up and rubbed my eye, practically rubbing it out of its socket. I cursed myself for doing so then cursed that pink sphere with reddish thorns—the Covid-19 germ.

Germs. These days I spend nearly an hour of each

Mr. Clean as I sanitize door-knobs, TV remotes, toilet handles, light switches, the steering wheel of my car, its gear shift. If I listed everything I wipe down, you’d be reading into tomorrow.

Despite all these chores and even without a job, there remain several hours to fill each day. A long ribbon of time dangling at the end of a kite. To shore up my day, I find I’m inadvertently pausing. I pause at the dining table where I have an outrageously difficult jigsaw puzzle splayed out like a salad bar in need of tending. I pause in front of the refrigerator several times a day. By the end of this pandemic, I’ll be writing a piece about my own 600-pound life. I pause to send texts and emails to many I haven’t communicated with in ages. I’ve always taken time to work out but with my gym closed that stopped. However, I recently resumed exercising to free YouTube videos, annoyed with myself for throwing away all my Jane Fonda workout tapes.

I spend hours paused in front of my television watching movies, docu-series and documentaries. I’ve been re-enjoying Dave Chappelle’s standup specials while imbibing in one of his favorite pastimes. I attempted to watch the much-ballyhooed “Tiger King” but was put-off by the people involved in that so-called industry, so I opted for “Mister Rogers’ Neighborhood” instead. It made me cry.

That’s another strange phenomenon. This pandemic has unexpectedly reduced me to cry over everything like when I saw the skating rink in Italy being loaded with corpses instead of families on an outing. My eyes filled with tears when I saw the people of New York applaud their medical workers. I sobbed when I read young Charlotte Figi, the child who inspired the creation of CBD strain Charlotte’s Web, died of Covid-19 complications. I consoled myself with a hearty helping of CBD-infused lemon gelato. Last week I sat bawling over a lengthy TV ad showing varied people harmoniously singing their support and love for us viewers. It was beautiful. Then I realized it was a commercial for Walmart! Apparently, I was so moved I hadn’t noticed all the blue vests.

With all the ads and billboards reminding us “we are in this together,” some, like me, are in this alone. No children, or grandchildren, spouse, or life partner. I don’t have a dog, cat, bird or even a fish. Without anyone to bounce all my energy off of my thoughts run wild and random.

For example, just how old is Sanjay Gupta anyway? Is Australia still burning? Where are all those fluorescent orange Jump bikes? How many words does the average person utter per minute? Should I move to Canada? And if so, which province?

With all this time on my hands and random thoughts in my head, I believe I have no choice but to stand on this planetary pause. This coronavirus has inspired me to do something helpful in my small way. A recent thought led me to ask: what haven’t I infused yet? So, naturally I paused and came up with a wild and wonderful idea and headed to the kitchen. 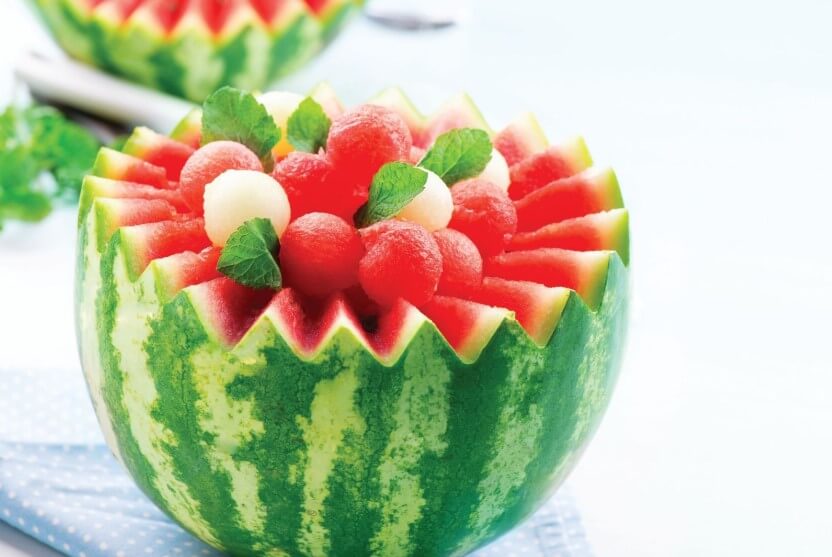 1/2 of a honeydew or other melon

In mixing bowl, whisk CBD isolate into simple syrup. Using injector, inject half of isolate solution into watermelon and the other half into second melon.

Slice watermelon in half. Using melon baller, remove rounds of melon into a large mixing bowl. Repeat process for second melon. Keep watermelon halves for use as serving vessel.

Add other fruits to mixing bowl.

In separate mixing bowl, whisk together ingredients for dressing. Pour over fruit and gently blend to coat fruit.

Pour fruit into watermelon halves and garnish with mint leaves.

Going for the green with smoothies ...