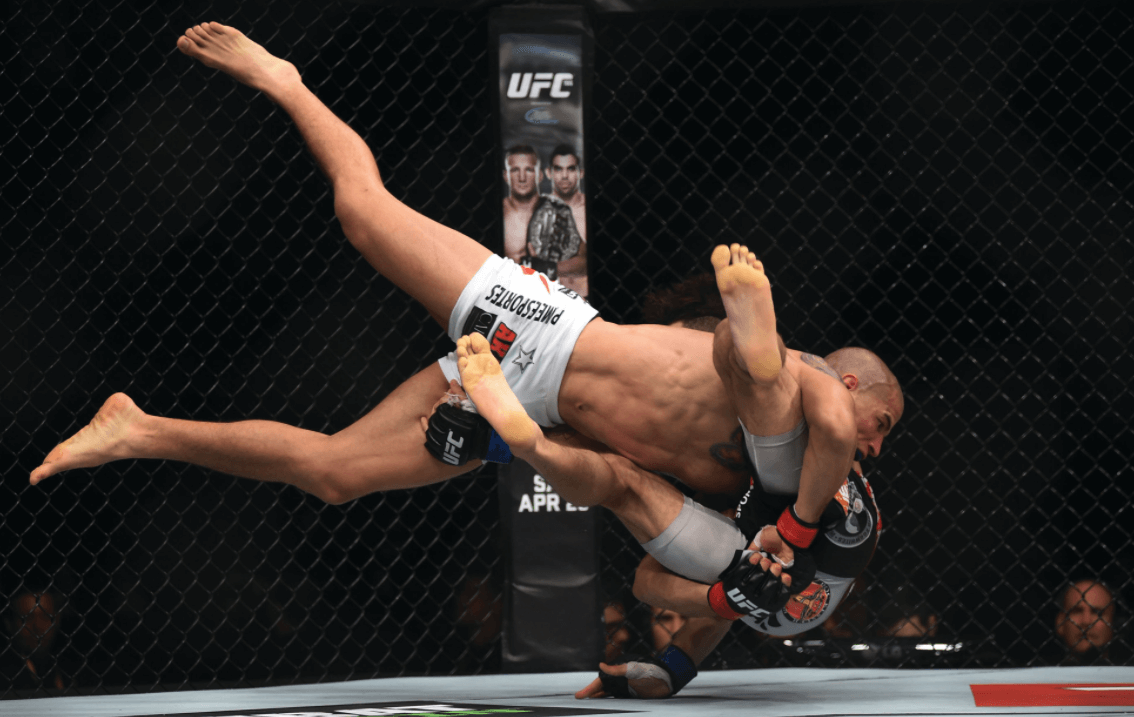 The UFC was the first professional sports league to figure out how to work within Covid-19 restrictions to ensure that the show could still go on. Ever nimble, UFC announced in April 2020 they would pursue an international venue described as a “private island” to host their fights. By June that promise was delivered in the form of Yas Island, aka “Fight Island,” in Abu Dhabi, United Arab Emirates with four fights scheduled throughout July.

However, as quickly as flamboyant UFC boss Dana White had his organization bubbled up and fighting, it wasn’t without challenges. “Because of Covid-19, we saw a lot of last-minute replacements. We do extensive testing, we have a bubble type environment to make sure that we do it before even a fighter travels to one of our events, they have to have a negative test at home,” explains Jeff Novitzky, UFC senior vice president of athlete health and performance. “So, what we’re seeing is positive Covid-19 tests and a lot of fighters dropping out at the last minute, and in turn a lot of last-minute replacements to those cards. This became a real issue because for a Saturday fight, we would sign a new fighter on a Tuesday or a Wednesday.”

The problem wasn’t finding enough fighters to replace those who tested positive for Covid-19. The problem was finding fighters who were testing positive for a whole other issue. “I’m getting calls saying I used (cannabis) last night because I didn’t know I had a fight coming up, so what’s going to happen on Saturday? And unfortunately, we saw several instances of fighters testing positive on fight night because they had used fight week,” says Novitzky. “What I learned pretty quickly in the Covid era is that we’re talking days, sometimes weeks before fighters would discontinue using and yet still, were coming in over that level.”

This led Novitzky to take a closer look at the issue. “I think it’s really inherently unfair to fighters. We had one, signed him on a Wednesday for a Saturday fight and he said, ‘Look, I used on Tuesday night. And so, we had a long discussion with him. He’s a new fighter too so he’s like, ‘Look, this is my foot into the door to the UFC. I gotta take this.’ But then the question became what happens on Saturday if he tests positive. The fighter won the fight and actually got a performance of the night bonus, $50,000. And sure, enough he ended up testing positive. He was sanctioned by the Nevada Athletic Commission and his win was taken away. He was suspended four-and-a-half months and he had a small fine. That’s really unfortunate and that’s a problem.”

A problem that Novitzky found an answer to in a most unexpected place. It was in a 2017-2018 U.S. Department of Transportation report to Congress that included a section on ending alcohol and other drug impairment in transportation. In the DOT report “they were looking at states legalizing medical and recreational marijuana to try to figure out drunk driving. There’s a blood alcohol level of 1.08 and they were trying to find what that magic number is for marijuana. And what this very detailed report says is that there is very little correlation between blood and even more so urine, THC levels, and impairment,” says Novitzky. “And that’s exactly what we’re seeing. We’re seeing fighters who have told us that days, if not weeks before a fight, they discontinue and they’re still exceeding that 150 nanograms per ml threshold. They’re obviously not impaired. I mean you’re not impaired for what you did the night before, let alone days and weeks before. This report basically recommends to Congress that the way to handle this from a driving impaired perspective is to do a field sobriety test. The blood readings of THC aren’t going to tell you much if anything in terms of impairment, you need to do some type of sobriety tests.”

Novitzky continues, “There was a high level of confidence in us relying on a government report made specifically for Congress so, we followed that lead, and I don’t think by any means we’re going out on a limb here.” With the DOT report in hand, the UFC decided retroactively, as of January 1, 2021, a positive drug test for carboxy-THC would no longer be considered a violation unless the United States Anti-Doping Agency is able to prove that an athlete intentionally used it for performance-enhancing purposes.

No longer a punishable offense in UFC’s anti-doping policy, Novitzky notes, “In my six years here, and I’ve been with a lot of fighters pre-fight, I’ve never seen anybody impaired and I don’t anticipate that will be the case. It would be a very rare occasion. So, we’ve taken marijuana off of our prohibited list.”

But he adds, “Marijuana still could be a punishable offense, but the fighter would have to show some type of evidence of impairment when they’re getting ready to fight. So, a reading in excess of 150 nanograms per ml by itself is no longer in violation. It would have to be paired with some type of evidence that the fighter was actually impaired, whether it’s visual evidence, a confession, smell, bloodshot eyes, etc. You need that extra step.

“Because, again, impairment is the thing that you’re concerned about with marijuana, how is it affecting you in your fight or your competition? And certainly, I think everybody would agree that using marijuana on Tuesday night, come Saturday night has no effect whatsoever for the fighter’s ability to fight or any performance enhancement advantage or any health and safety disadvantage. There’s nothing there.”

‘There’s nothing there’ seems an appropriate response to testing fighters for marijuana in general. Because when the effects of cannabis are considered, it’s hard to believe using cannabis the day before or of a competition would enhance a fighter’s athletic performance. “That’s a big debate, right? I think the argument would be potentially anti-anxiety or calming nerves a little bit. Nervousness and stress are a big part of the UFC. When you’re coming up on a UFC event, you are competing against one of the most skilled mixed martial artists on the planet whose job is to try to inflict damage and get you to stop. I think the argument would be if you’re less nervous or concerned about that, could there be an advantage? Certainly, the ability to handle and deal with pain in a fight, potentially that can be an argument,” says Novitzky. “Personally, I don’t necessarily buy that. I buy more on the health and safety aspect where your reaction times may be slowed a little bit and that would be a danger to the fighter themselves.”

The health and safety aspect brings us to the reason why UFC fighters use cannabis in the first place. Athletes prefer it for recovering from injuries over opioids. “That’s another big reason why we were looking so close at this because since cannabis is prohibited in competition, it is funneling and directing athletes to what I feel are more addictive, definitely more addictive, more dangerous substances like opioids,” explains Novitzky. “So certainly, based on the research that I know of about propensity for addiction, cannabis would be much less dangerous than things like opioids. Things like anti-anxiety medications, like Xanax, certain sleep aids, like Ambien, this is what our fighters I think, for the most part, are using cannabis for—certain levels of pain control, for anti-anxiety, and to sleep. I don’t think there’s any argument or any question that comparatively cannabis versus these synthetic prescription drugs would be safer and certainly have less addictive properties.”

Even though Novitzky prefers UFC’s athletes use cannabis over opioids, the former federal agent for the United States Food and Drug Administration (FDA) is anti-drug across the board. “At UFC we’re a proponent of our athletes using no drugs. We would love to see them all drug-free, but if you look at the reality of it these are high level athletes who put their bodies through things that most normal human beings don’t do. Because of that, they’re suffering consequences. They’re getting nicks and pains. A lot of them, especially during fight week, have a very difficult time getting any sleep because of the anticipation of this fight so it just was not fair to them, in our opinion, of what these strict liability rules are.”

In then end, it comes down to a question of fairness. “I think we’ve done a great job of both having a really strong comprehensive program, yet on the other side, being as fair as possible and taking everything from an athlete’s perspective into consideration,” concludes Novitzky. “You’ve got to be fair and you’ve got to take the athlete into consideration. And that is, certainly as it relates to cannabis, what we are doing.”

Elevating the Conversation with Riana Du ...