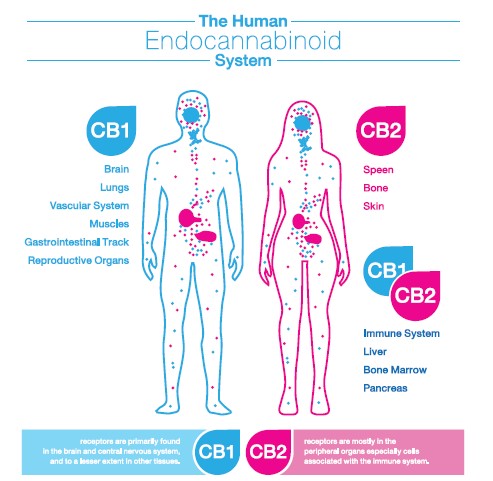 If your canna-curiosity has gotten the best of you, here’s a 411 for beginners

If your canna-curiosity has gotten the best of you, here’s a 411 for beginners

THC, CBD & the rest of the Cannabinoid Clan

Cannabinoids are naturally occurring chemical compounds found in cannabis that are partly responsible for its vast and diverse effects.

THC: Tetrahydrocannabinol is the most well-known and most prevalent cannabinoid found in cannabis. Responsible for the “high” of cannabis, THC can affect perception, mood, emotion, cognition, and motor function. Research has shown THC reduces or even eliminates pain, nausea, and stress while also helping to stimulate appetite and combat insomnia.

CBD: Cannabidiol is a non-psychoactive that significantly reduces symptoms in patients suffering from seizure and spasm disorders such as epilepsy and multiple sclerosis (MS). One of the best CBD sources is www.projectcbd.org.

CBN: Cannabinol forms as THC degrades. As the oxidation byproduct of THC with its breakdown resulting in a weak psychoactive that has high sedation effects, it is primarily marketed as a sleep aid. It also works to relieve pain and inflammation caused by arthritis and Crohn’s disease.

CBG: Cannabigerol is an analgesic, non-intoxicating cannabinoid that works as a potent appetite stimulant used for the treatment of gastrointestinal inflammation and glaucoma as well as treating Crohn’s disease and cancer.

THCV: Tetrahydrocannabivarin is a psychoactive cannabinoid found in sativa strains of cannabis, in turn, producing a more motivated, alert and energizing feeling of euphoria. Research shows THCV can help reduce or even prevent anxiety and panic attacks which is helpful for the treatment of PTSD. It is also neuroprotective, so ideal for treating Alzheimer’s disease, Parkinson’s disease, and MS.

CBC: Cannabichromene is a powerful, non-psychoactive cannabinoid that plays a significant role in the anti-cancer and anti-tumor capabilities of cannabis. CBC is particularly effective in providing symptom relief from Irritable Bowel Syndrome, Crohn’s disease, neuropathy and chronic post-operative pain.

Which cannabis species should you shop for?

There are two species of cannabis, sativa and indica, and a hybrid of the two. Understanding the difference between them will help you to understand what you need to buy. Indica strains are associated with naps and relaxation and can be easily remembered with the nickname “in-da-couch” for its chill effect that results in a body high, stoniness and sedative qualities. Sativa strains are considered better for daytime use and are associated with mental euphoria, ability to help with focus, and often induced laughter.

How to start: If you are new to cannabis, start with

5 to 10mg of THC. I used to recommend that novices start with gummies but now I am suggesting newbies start with beverages. As you determine your dose or tolerance level, bear in mind that much like alcohol, your reaction to cannabis is dependent on how full your stomach is, how much water you have consumed, and your weight.

Consume your appointed edible or beverage and wait 45 to 60 minutes. If after waiting an hour you don’t feel anything, dose yourself again. If you are overwhelmed with your THC dosage, do half-a-dose next time. Also, in case you overdo it, have a bottle of CBD tincture at the ready. CBD negates THC and so a few drops of oil under your tongue will lessen THC’s effects.

Micro-dosing refers to the practice of taking tiny portions of a given compound to achieve your desired effect. A micro-dose is typically 1/10 to 1/20 of a normal dose, or 10 to 20 micrograms. The goal is to achieve the positive results of the substance (more focus, energy, and emotional balance) without the negative (hallucinations, sensory shifts, and other extreme experiential side effects). Legal cannabis products such as edibles, oils, and tinctures are much better suited to micro-dosing since it is much easier to control your dosage. Higher doses of marijuana can sometimes lead to difficulty concentrating and anxiety, which is why conditions such as depression, anxiety, and pain are especially well suited to micro-dosing.

Cannabis’s entourage effect is the synergy that takes place when THC, CBD, minor cannabinoids, and terpenes work together to provide health benefits. The theory behind the entourage effect is that all the compounds in cannabis work together as a whole plant, and when taken together, they produce a better effect than when taken alone. The cannabis plant produces an entourage of cannabinoids and terpenoids that clearly modulate the effects of one another and often reduce the side effects of one constituent while enhancing the effects of another. For instance, CBD reduces the anxiety that can be caused by THC and reduces the forgetfulness produced by moderate doses of THC.

Your body has an Endocannabinoid System!

Discovered in 1989, the endocannabinoid system [ECS] is a very complex regulatory system found in the body. Now included in medical school curriculum, the ECS regulates functions that include memory, digestion, motor function, immune response and inflammation, appetite, pain, blood pressure, bone growth, and the protection of neutral tissues. The endocannabinoid system has receptors, called CB1 and CB2, that synergistically interact with other cannabinoids and endocannabinoids to produce sometimes profound medical effects. CB1 receptors are located throughout the brain and central nervous system, as well as the kidneys, liver, lungs, digestive tract, and even the eyes. The placement of CB1 receptors is also why cannabis overdoses are impossible—because these receptors are not present in the basal regions of the brain that are responsible for vital functions, such as heart and respiratory function. CB2 receptors are primarily found in the peripheral organs, in particular tissues associated with the immune system, including the tonsils, thymus, spleen, and bone marrow. (see illustration on page 16)

A Tale of Two Taxes

There are two cannabis taxes in Nevada.

A 15% Wholesale Marijuana Tax [excise tax on the first wholesale sale of marijuana by a cultivator] goes to the Distribute School Account or education funding.

A 10% Retail Marijuana Tax [excise tax on the sale of marijuana to a customer for adult use, and not to a medical patient cardholder] goes to Nevada’s Rainy Day Fund.