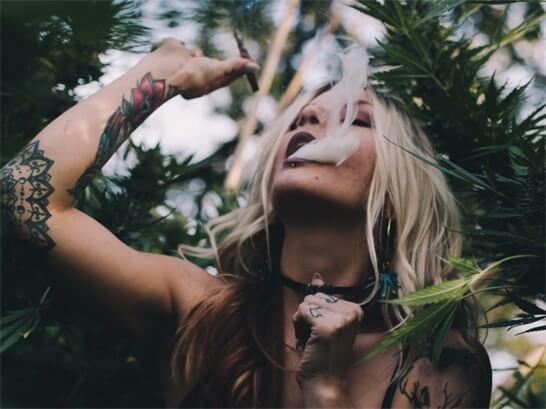 Synthetics give cannabis a bad name. Synthetics of all kinds – street synthetics, pharmaceutical synthetics, and even synthetic terpenes in concentrates – present a serious danger to all who dare to partake.

You probably know them by their street names: bath salts, K2 and spice. They are a three-headed devil that exists merely to mimic the effect of cannabis when legal cannabis is safer and more effective. Synthetics are created in a lab to mimic medicine because the process is cheaper and legal.

The first demon is a liquid sprayed on who-knows-what that doesn’t come close to cannabis, can be addicting, and is potentially lethal. Taking away the true intent and replacing it with something that will harm the brain and who knows what else has greed as a stimulant.

Synthetic cannabinoids like K2 are man-made chemicals that can either be sprayed on dried plants and smoked or sold as liquids to be inhaled in e-cigarettes or other devices. The big draw is they can be anywhere from 2 to 100 times more potent than THC, according to researchers.

Credit for its existence can be given to a college student at MIT while others point to foreign introduction. The big attraction was a cheap high without getting caught. The stuff is created and packaged in such places as China, Mexico and yes, the good ole US of A.

The spawning of fake THC has drawn many names for products in appealing packaging to become incalculable chemical compound forms of K-2 and spice. Can they mimic marijuana? No. Certainly not for this scribe, who sampled the goods back in Illinois ten years ago when finding anything to smoke meant trying stuff that may not be good for you. Not much has changed as far as the eradication of its existence.

As a friend noted of his synthetic experience: “I took one hit and said this is enough of this shit, dumped the bowl on the ground and gave the rest of the package away to a guy at work,” he said. “It gave me a headache.”

One of its attractions is that synthetic cannabinoid consumption does not cause a flagged urine drug test for THC, its metabolites, or other cannabinoids present in marijuana using standard immunological screening procedures. The secret of synthetic formulas is they are always altered slightly to create a chemical compound new to law enforcement, the Food and Drug Administration, and only deemed illegal when the compound is identified and made illegal.

Having watched loved ones become drawn to it as a replacement for a better high and seeing friends using it to avoid being fired for testing positive for marijuana, the attraction is clear.

The attraction for a cannabis extractor to use synthetic terpenes is also apparent with money being the motivating factor. That and to boast strong profiles after being tested by the state before sale. Terpenes are extracted in the distillate process and can be re-introduced again, sometimes augmented by synthetic terpenes.

The landscape of synthetics gets more difficult to traverse when synthetic terpenes are found because no one knows what effect they can have. Again, altering the entourage effect is risky and makes proper dosing nearly impossible.

Putting the pot in potpourri

Street, or black market concoctions, are often called designer drugs but are sprayed or otherwise soaked into a plant or other base material. The blend is sometimes misleadingly referred to as synthetic marijuana and is sold for recreational drug use.

When synthetic cannabinoid blends first went on sale in the early 2000s, it was thought that they achieved an effect through a mixture of natural herbs. They lied. Laboratory analysis in 2008 showed that this was not the case. Compounds and formulas change to circumvent the law and are sold under various brand names, online, in head shops and where else but the street. In comparison with cannabis, it is inexpensive.

Professor John W. Huffman, who first synthesized many of the cannabinoids used in synthetic cannabis mimics, is quoted as saying, "People who use it are idiots. You don't know what it's going to do to you." A user who consumed three grams of Spice Gold every day for several months showed withdrawal symptoms similar to those associated with withdrawing from the use of narcotics. Doctors treating the user also noted that his use of the product showed signs associated with addiction.

On the street, the population of users is higher. The degree of the presence of synthetic street drugs appears to hit harder in states with harsher penalties against cannabis who have yet to amend their laws.

Big Pharma gets its piece of the synthetics pie

Big Pharma always jumps in when there is a buck to be made, but some of the inspiration to creating synthetic THC in a lab comes from roadblocks to real marijuana research. Israel and Canada are light years ahead when it comes to researching the plant while the United States just keeps producing more prescription drugs.

The biggest complaint to legalizing cannabis is that it hasn’t been studied enough. And yet, synthetic cannabinoids are being OK’d by the FDA and produced without any research at all.

The most noteworthy pharmaceutical synthetic is Marinol. And yes, having tried that (with a legal prescription) as well -- the drug is powerful, expensive and can dilate your eyes with a single dose and pose big addiction problems. That was easily noticeable after taking 30 pills in 30 days.

But on June 25, the U.S. Food and Drug Administration (FDA) approved GW Pharmaceuticals’ drug Epidiolex to treat two rare types of childhood-onset epilepsy known as Dravet syndrome and Lennox-Gastaut syndrome. What makes this approval so different from just any other drug approval is that it marked the first time the FDA OK'd a cannabis-derived drug.

While synthetic versions of THC have been approved before, this was the first time a cannabidiol (CBD)-based medicine directly from the cannabis plant was given the go-ahead.

Synthetic cannabinoids were often designed for research purposes, in part due to legal restrictions on natural cannabinoids preventing research. Studies are ongoing to examine their therapeutic potential. One study found that while mice developed withdrawal symptoms from THC that was not the case with the synthetic cannabinoid AM-1710, which was able to relieve neuropathic pain without inducing either tolerance or withdrawal suggesting that CB2 receptors could be a viable target for development of pain-management drugs.

The first synthetic cannabinoids were synthesized by Roger Adams in the early 1940s. The first generation of THC analogs (synhexyl, nabilone, nabitan, nantradol) featured slight variations of the THC molecule by substituting nitrogen for oxygen in the benzopyran ring in the 1980s.

Synthetic THC (Marinol, Dronabinol) was touted in 1985 as an antiemetic and again in 1991 as an appetite stimulant. The U.S. Food and Drug Administration has approved two drugs with THC that are prescribed in pill form (Marinol and Syndros) to treat nausea caused by cancer, chemotherapy and loss of appetite.

Synthetic cannabinoids are addictive to the brain but include a broad class of compounds in which neurotoxicity may vary substantially.

Jaime Primerano, D.O., Sunrise Hospital and Medical Center’s Chair of Emergency Services, said the easiest way to determine who is on synthetics is to ask them. “The only way to know if your patient is on it is to ask him or her. In general, we see it occasionally, but it is not the most commonly abused drug in Las Vegas,” she said.

Testing is next to impossible due to costs and changing formulas. “There are a couple hundred different chemical formulas for synthetic marijuana,” Primerano said. “And, as of yet, no one has devised a single lab to accurately test for it.”

There are budtenders in Las Vegas who see the addiction firsthand when those strung out on synthetics look to cannabis for help. But it’s hard to replicate the sharp, piercing high of synthetics. They hear stories about their power and the addiction that causes long-term effects.

“I tell them that only concentrates can deliver the hit they need to help them get off that stuff,” said one local budtender at a Downtown dispensary. “But they often can’t smoke because their throats are all burned. And they can’t do edibles because they don’t feel them. They have a hard time coming off of it. They can’t eat, and they go through sweats like a meth user, or worse.”

The Las Vegas Metropolitan Police Department (LVMPD) reports that large quantities have not surfaced or translated into busts since pot went legal. Local smoke shop outlets were known for selling it slyly over the counter or out the back door. That, reportedly, has receded.

“I haven’t heard anything about this (recently),” said LVMPD Public Information Officer Larry Hadfield. “I haven’t heard of anything regarding shop busts. Heroin and meth are the problem. ...To my knowledge my first instinct is to say we haven’t (seen many arrests).”

Spice is not nice

All the worst stories about street synthetics come mostly from states where cannabis is able to be legally obtained.

On a single day this past August in New Haven, Conn., 76 people are believed to have overdosed on some form of K2. Officials responded to 19 additional reports of overdoses the next day, bringing the total to 95 cases. Most all of the overdoses occurred in New Haven Green, a large park in the city's downtown amidst churches, family picnic areas and a historical burial ground. Patients, which included people of various ages and demographics, had symptoms of increased heart rates, decreased respiratory rates and a lot of vomiting. Some people were unconscious, others were semi-conscious.

Synthetics caused similar mass hospitalizations last May when 25 people were hospitalized in one area of Brooklyn, N.Y., after having negative reactions to what was reportedly believed to be K2.

In North Carolina, a vape store clerk was charged after a student at a high school overdosed using a vape product. Police said the vape was sold as “Black Diamond” CBD oil but was a synthetic cannabinoid known by the chemical name 5-Fluoro ADB and FUB-AMB, both of which are controlled substances.

Synthetic cannabinoids were tied to 89 reported cases of severe bleeding, including two deaths, in Chicago and central Illinois this past April. All cases required hospitalization related to coughing up blood, blood in the urine, bloody nose, bleeding gums and other symptoms. Nine of the cases tested positive for brodifacoum, or rat poison, according to a statement from the Illinois Department of Public Health. State officials are working to identify any common synthetic cannabinoid products related to those cases and to determine where the products were obtained.