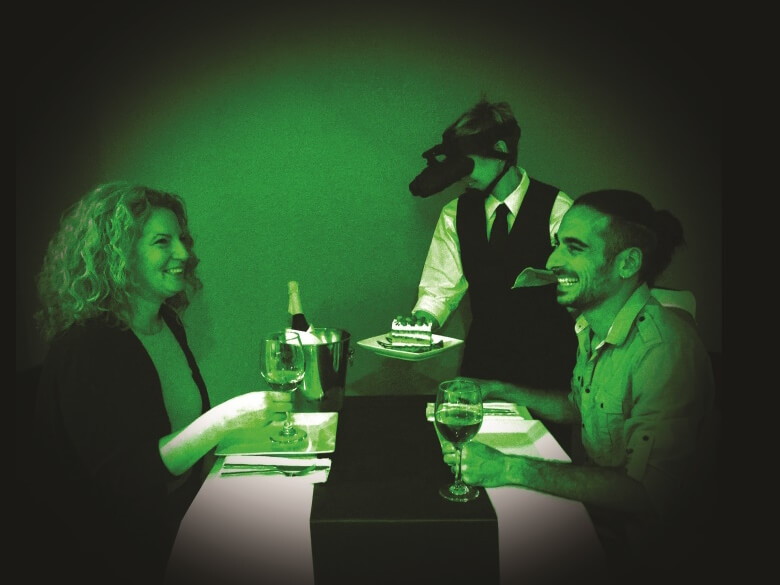 elevate writer hightens his senses while dining in the dark

elevate writer hightens his senses while dining in the dark

Food is a funny thing, in that so much of it is visual. As my 11-year-old will assert on a daily basis, so much of what ends up being appetizing to us is based on whether it ‘looks’ good or not. So, what to make of food you can’t see? Well, it turns out there is a restaurant right here in Las Vegas that does dinner service completely in the dark. It’s got a catchy name...what was it? Oh yeah: Blackout Dining in the Dark.

The creators of this dining experience tout it as “more than just a meal; it’s a journey of the senses that will make you re-evaluate your perception of taste, smell and touch.” They don’t mention it explicitly, but it also sounds like an interesting thing to do while high. Food and altered perception together in an interesting sensory way, what could go wrong? Turns out, nothing -- unless you get marijuana-induced anxiety attack brought on by sitting in total darkness for a couple of hours.

When my dining partner and I entered the establishment, we were pleasantly stoned and quite amused with the gift shop atmosphere of the front, well-lit area. Guests are greeted and asked about food and beverage choices (without being told exactly what’s on the menu up front. I get it, it’s like a trust exercise).

One aspect, to put less trusting diners at ease, is that everything is 100% plant based, so you don’t have to worry about any strange animal body parts being a part of the meal. Before being seated, we were asked to put our cell phones and any other light-emitting devices in an assigned locker.

A vision-impaired host welcomed us again and led us to a kind of holding area where they prepare you to enter the dining room and be seated in total darkness. I thought that was a nice touch, and that he may have been the most experienced employee to deal with the overall concept of the restaurant without coming off as cheap or pandering.

Once in the waiting area, servers put on night-vision goggles and have guests line up behind them, hand on the shoulder ahead of them, as they are led through what feels like a midnight raid on the Bin Laden compound. Once seated, the table environment is explained so you know where everything is and then we were left to get acquainted with our surroundings. Maybe it was the weed, but the darkness permeates like a substance you can almost touch. The murmurs of conversation from surrounding tables slowly comes more sharply into focus, your ears adjust, and you feel like you could almost join in any given conversation.

After locating glasses and utensils on the table it became easy to manipulate them. It could have been that I was pretty stoned, but I convinced myself that by staring intensely into the void, I could actually make out shapes and objects like a bat (or Daredevil Matt Murdock).

At one point a large group came in and we basically spent a good deal of time hanging on their boisterous conversation (it was almost like a co-ed bachelor party). My guest and I love to people-watch when we’re dining out, and it was fun to employ a completely different sense to more or less the same effect. We also spent a lot of the meal staring blankly at presumably each other and giggling.

Which brings us to the meal. We were presented with a four-course prix fixe menu (there is also a six-course option) and, I have to say, I was pleasantly surprised. I love eating vegan on a regular basis, but I have had some hit or miss dishes around town, and I thought that my inability to view my food might cause it to have a middling quality. But the food was exquisitely prepared and bursting with flavors. Nothing squishy or slurpy, and the portions were very manageable for eating in the dark. Knowing that they were clearly not going to sneak anything overtly surprising into our meal, my guest and I had a lot of fun guessing the components of each course.

With each plate, the server prepared us in advance with when and where things were being placed. They have a full beverage menu and we helped ourselves to a couple of glasses of a refreshing rosé. At one point, I had to use the restroom and became a little anxious wondering how I would ever find it. Not to worry, when a server came by to check on us, he kindly led me back out to the front where the restrooms were located. The transition from an hour in darkness to sudden light was a little jarring (but it turns out they give everyone free sunglasses to acclimate upon the completion of their meal). He then waited for me and quickly led me back to the table.

We emerged like celebrities, with our complimentary shades. It was only then that we were shown the menu we had enjoyed. The typical price-tag for the four-course meal comes to around $80, excluding drinks. At the end of the day, this is a great idea for your typical Vegas cannabis user looking for something different, but so is bungee jumping off the Stratosphere. Wait, I am never doing that, so for the sake of future writing assignments let’s stick with low-risk novelty restaurant concepts and the like.