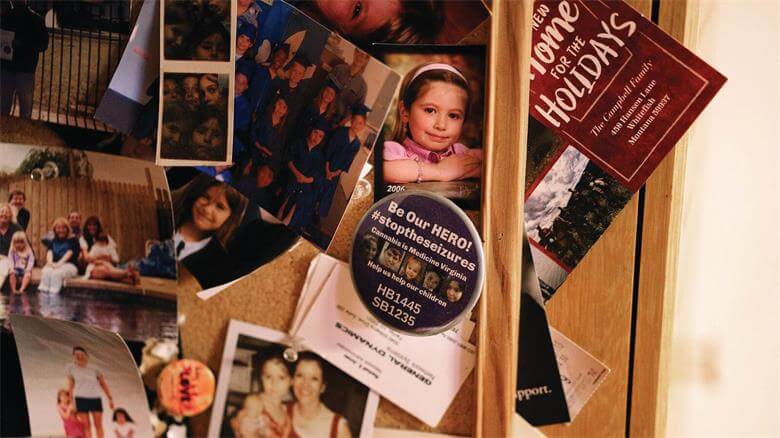 Released for free online in April, The Life She Deserves is the first documentary film from renowned nonprofit public policy organization the Brookings Institution. The 21-minute film, directed, produced and co-written by Brookings creative and film director George Burroughs, tells the story of Jennifer Collins, a teenager in Virginia who’s suffered from severe symptoms of epilepsy since she was a child. Prescription drugs typically used to treat epilepsy give Jennifer horrible side effects, including weight gain, fits of rage and suicidal thoughts, but when her family discovers the use of THCA oil, a non-psychoactive cannabinoid found in raw and live cannabis, as a potential epilepsy treatment, Jennifer’s life changes drastically.

The problem is that the oil isn’t legal in Virginia, and the movie chronicles the family’s efforts to obtain the only treatment that allows Jennifer to live a normal life, using that story to lead in to a broader discussion of the inconsistency of medical marijuana policy between state laws and federal regulations. Burroughs worked closely with Brookings senior fellow John Hudak on the story, who fleshes out the story with a quick synopsis: “The film highlights how a husband-wife duo responsibly cultivate cannabis in a heavily regulated system. And the seller is a rabbi who, inspired by his father-in-law’s decades-long battle with MS, opened a family business where he dispenses cannabis to a wide variety of patients—just a stone’s throw from the same institutions of government that label him a narco-trafficker.”

The film is the first of a new initiative for the public policy institute to use documentary filmmaking to present important issues to the general public. elevate spoke to Burroughs from his office at Brookings to learn more about this unique film.

How did you first come across the story of Jennifer Collins and her family?

John [Hudak] had met Beth [Collins] through a panel discussion or a talk he had done. When we first started working with John on maybe doing something around marijuana, we hadn’t entertained them yet, until John wrote a piece called The Medical Marijuana Mess, and then we had met the family for the first time. At that time we interviewed [parents] Pat and Beth. Jenn was 15 or going on 16, I think. And we only photographed her.

Was the film always intended to incorporate a personal story?

Yes, although this particular personal story grew out of talking to the family. Brookings has empirical research, they have data, and they have analysis. Which means white papers and research abstracts, as well as data that just gets published. But how do you capture the human story? It doesn’t really jump off the page, so a documentary is the right tool for this. And that’s why we chose a documentary—so you could see the American experience that the Collins have gone through.

as a filmmaker How do you balance the personal story with conveying policy information?

For the documentary we said, okay, let’s set this up. When you have data, you usually have percentages and numbers, but each percentage and any figure of data represents a human being. So we thought it was the right decision to tell their story first, and set up what they had been going through. And then work it into John toward the end. We actually did reel back some of the information that we could’ve put in there around policy, because we wanted people to see the effect of federal legislation, or lack thereof, on a family. We wanted to show that and not tell that.

The beauty, since we are Brookings and we are a think tank, is that someone can watch this documentary, and if they want to learn more, they can go read more blog posts from John on FixGov [Brookings blog]. They could pick up his book, Marijuana: A Short History. They could watch any other interviews he’s done. They could pick up any white papers he’s written on the issue. It’s kind of like this trifecta.

What do you hope people take away from watching the movie?

I hope that if they buy into the stigma around marijuana and what a cannabis user looks like, I hope, for the sake of all the people that rely on cannabis medicinally, that those people watch it and kind of find some middle ground and understanding. That these people are using this to deal with a health condition, and that maybe [viewers] should rethink the idea or the stigma surrounding medical marijuana.

What kind of audience feedback have you gotten?

We’ve been getting a pretty warm reception. We’ve also been getting a lot of people go, “I didn’t know it was used this way.” And they go, “I can get behind this.” The whole idea is to educate. Not tell people how to think, but to show them the facts and let them make up their own minds.

Beyond making the film available online, how else are you getting it to audiences?

Anyone can request to screen it, and they can screen it for free. If you’re an organization anywhere in the United States or around the world, we can get you the file, and you can have a screening. We’re looking at other possible screenings with policymakers. There is also some interest outside of the country in screening it, in countries where they don’t even have medical [marijuana] legalized.

Is there a chance that this story could expand into a feature film?

Yes, absolutely. For us, this isn’t a one-and-done. I’m sitting right here in an office with Ian McAllister, who helped produce this. He and I have really built out a lot of what Brookings is doing as far as film. We have Jenn’s picture on the wall here. We’re still very close with the family, and other people that we’ve talked to. We know this issue is not fixed, so it’s not like we’ve made this, we’re going to do a little tour and a couple of screenings and be like, okay, on to the next thing. For us here—and I guess this is one of the differences for us being at Brookings—we want to continue to work on this issue and to continue to educate. Because it’s far from fixed.

To watch the film or book your own screening, visit lifeshedeserves.com