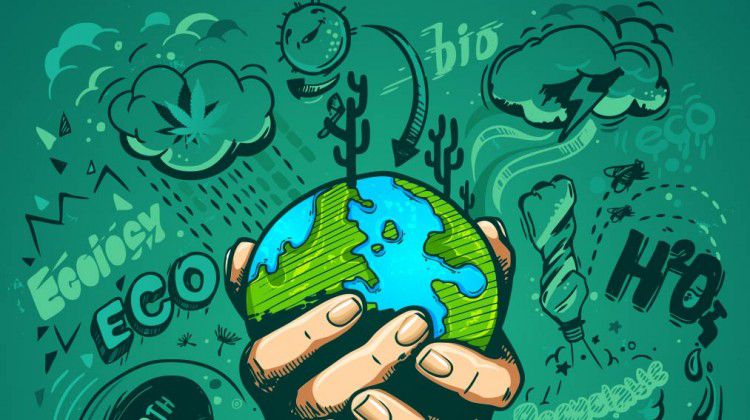 What environmental impact will Nevada’s cultivators have on Mother Earth?

What environmental impact will Nevada’s cultivators have on Mother Earth?

For some people, the prospect of cultivating marijuana plants in Nevada’s growing cannabis industry might spark images of Humboldt County hippies in tie-dyes under the sunny sky. Of course, the high-tech reality of the Silver State’s marijuana industry has very little connection with the old, outdoor and haphazard ways of underground agriculture.

Indeed, the modern cultivation center uses enormous amounts of water and power, the two components without which the plants cannot survive. Those resources not only cost the producers many thousands of dollars every month, but strain the ability of utilities to supply them. Providing those resources comes at a price. Electricity is largely produced by burning fossil fuels, which pollutes the sky with heat-holding carbon, and water, as we are often reminded in Southern Nevada, is one of most precious natural resources, mostly arriving through the rapidly dwindling supply in Lake Mead.

But the new industry is wrestling with the environmental impacts of its marijuana cultivation and production, and the cost, environmental and financial, of water and electrical power.

Darrick J. Cole, co-founder and managing partners of Skytree Capital Partners, is somewhat of a skeptic when it comes to putting money into “green” environmental elements of cultivation centers. The reason, he explains, is money.

It can cost upwards of $5 million to go through the licensing process and build an approved cultivation facility. With those kinds of costs, investors rarely have money to put into environmental enhancements, Cole, whose company is an equity lender in the cannabis industry, says.

“There are a few deep pockets trying to do alternatives” to traditional lighting and watering systems, he acknowledges.

And he notes that there have been real advances in some technologies, particularly in lighting systems, that use less electricity and produce less heat, which saves on air-conditioning costs. A lot of the technology is so new that people aren’t sure that it will ultimately save significant amounts of power and money, Cole said.

“I think there’s going to be a lot of trial and error,” Cole says. “I think it’s going to come. I just don’t think it’s here yet.”

Producers in other parts of the country have advantages when it comes to environmental sensitivities. In California, for example, cannabis growers can do it outside, using the natural light of the sun and the natural cooling of the great outdoors, an option that is not available in Nevada, where grows by law have to be indoors and smell-contained.

Indoor cultivators in other parts of the country where medical or recreational marijuana is legal under state laws don’t have to contend with Southern Nevada’s brutal summer heat. And many of the cultivators in Nevada have only seen their first mature plant harvests in the last few months. It remains to be seen how they will handle the first full summer, in which outdoor temperatures can easily exceed 110 degrees.

But cultivators and entrepreneurs are clever people, and many of them are already finding cost-effective ways to bring down power and water costs and be kind to the environment.

Jon Harms, president and founder of Nano Evaporative Technologies Inc., believes he has found a technology that can cut the cooling costs of cultivation facilities in half. It is a hybrid technology that combines evaporation from terracotta-like ceramics with traditional air conditioning systems.

It is more than a swamp cooler and works well in humid situations, Harms says.

He says he would be happy to install his systems in any kind of building that needs cooling -- which in Southern Nevada, means any kind of building with people in it -- but cultivation centers were among the first to come calling, simply because their cooling needs are so expensive and extreme.

Harms says he has installed his cooling systems in about four large-scale hydroponics cultivation centers so far.

In his unassuming shop in the southwest Las Vegas Valley, Harms has a demonstration system set up. Air blows through the system, coming out about 20 degrees below the ambient air temperature. The demonstration system runs on regular AC current. Unlike a traditional air conditioner, there is no waste heat expelled. It’s not exactly a refutation of Isaac Newton, Harms explains. There is no heat generated and forced out of the system because the evaporative system uses the energy from the warm air in the cooling process.

It still looks and sounds a little like magic, but Harms says his system in scalable. Since the power needs are modest, a solar-powered system might be able to provide spot cooling needs in disaster situations.

In the meantime, cultivators can cut their cooling needs and air-conditioning bills by 25 to 50 percent, Harms says, noting, “This technology can pretty much change the industry.”

Another technology that is being deployed and changing the industry is advanced light-emitting-diode lighting. Kevin Biernacki is a master grower at a nondescript cultivation facility in Southern Nevada. He says the computer-controlled LED lighting he uses has some significant advantages over the traditional high-pressure sodium lights that have, heretofore, been the industry standard.

The powerful LEDs he uses can be tailored to provide whatever part of the visible spectrum is needed for the plants. The lighting system is computer controlled and can be accessed from a remote location.

The old high-pressure-sodium lights would need frequent replacement, sometimes after just one full grow cycle. And they produce heat, a lot of heat, over 600 degrees. All that heat had to be carried off by powerful air condition systems, which also consume tremendous amounts of energy.

The new LEDs should last five to 10 years, Biernacki says.

The best part? “There’s a significant saving in cost and overall carbon output,” he says. The new lighting technology has cut the air-conditioning needs for the grow site in half.

Biernacki and his colleague, Brandon Wiegand, a vice president at the Grove, which has two dispensaries in Southern Nevada, say that they are among the first cultivators to use the new LED lighting technology.

“We’re the largest grow where this has been deployed,” Wiegand says of the 16,660-square-foot cultivation. “That will only last so long, but we’ll shout it from the rooftops while we can.”

Beirnacki says the goal of his effort is two-fold: To save money, but also to be good stewards of the environment.

A few miles away, in an old food warehouse in the shadow of Strip high rises, an even bigger effort to save power and water is in place. Darin Carpenter, director of cultivation for Tryke Companies, oversees operations at a cultivation site that is 105,000 square feet, with capacity to expand another 50,000 square feet if and when the demand is there. The company also is building a dispensary and production center at the site, which is now producing 76 strains of marijuana and holds, Carpenter says, a “genetic locker” of 300 strains.

Much of the product in the grow rooms looks like similar grow rooms around Las Vegas, but Carpenter says the differences are substantial. The use of different technology has allowed them to reduce the water used in their hydroponics system by half, he says.

Computers monitor the nutrient mix and amount of water released to the plants, and instead of just water, the plants are nourished by a moist membrane underneath the trays. Systems catch the water “exhaled” by the plants in the natural process of transpiration, allowing the center to save even more water, he explains – up to 70 percent efficiency over other hydroponics systems.

The water is collected in enormous plastic containers the size of a two-door Fiat, 2,400 gallons when full, purified and sent back to provide sustenance to the plants.

There is a similar effort underway on the power-use side of Tryke’s operation. The complex uses 4.6 megawatts of electricity – a lot of power, certainly, but Carpenter says a similarly sized operation would use roughly 8 megawatts.

Meanwhile, an unconventional air-conditioning system depends on cooled water pumping through the former warehouse, a system that Carpenter calls “the lungs” of the operation. Evaporative cooling and a circulation throughout the complex keep the people, and, most importantly, the thousands of plants, comfortable.

The systems cut 40 to 50 percent off their power bills versus traditional air conditioning, Carpenter says.

Carpenter is tall and thin, and in his lab coat, he looks a lot like the scientist he was trained to be. We ask, why does he do it? Is he a tree-hugging hippie, or is he just trying to save on the bottom line?

“It’s both, actually,” he says with a shrug. “We want to feel good about what we are doing as an industry.”