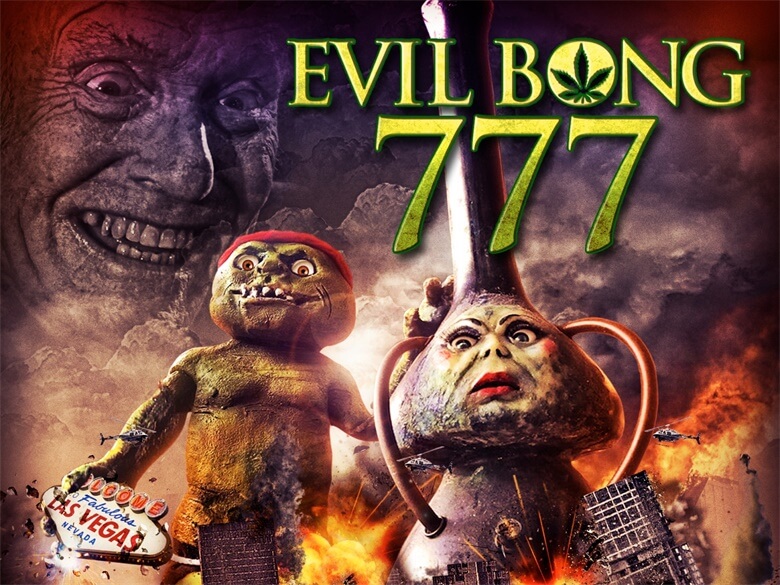 B-movie impresario Charles Band has been making low-brow, low-budget horror movies since the late 1970s, and his Full Moon Features has produced cult franchises like Puppet Master, Demonic Toys and Subspecies. In 2006, Band directed a cheapo stoner horror movie called Evil Bong, and in the years since, the Evil Bong series has become a cornerstone of Full Moon, with multiple installments and successful crowd-funding campaigns. As with most Full Moon productions, it’s probably better enjoyed in a slightly altered state.

The series kicks off with an amiable, low-key stoner comedy that could only barely be called a horror movie. Nerdy college student Alistair (David Weidoff) rents a room from stoners Larnell (John Patrick Jordan), Bachman (Mitch Eakins) and Brett (Brian Lloyd), and then has to help them out when their souls end up captured by a haunted bong named Eebee (voiced by Michelle Mais). The first movie introduces the concept of the Bong World, a dimension inside the evil bong where people go when they smoke from it and are taken prisoner. Band clearly spent most of his budget on securing Tommy Chong to play a supporting role; the Eebee puppet doesn’t even move, and virtually the entire movie takes place in a one-room apartment. Chong doesn’t return for any of the sequels, but the rushed, cheap aesthetic is here to stay.

Suffering from aftereffects of their encounter with Eebee, the four guys (including new actor Brett Chukerman as Alistair) head to the jungles of South America (probably just Band’s back yard) to trace the bong’s origins, accompanied by annoying delivery guy Rabbit (Sonny Carl Davis), who’ll become an increasingly important part of the series. Terrible sexist jokes abound as the characters encounter the perpetually topless Poontang Tribe and team up with Eebee to take down King Bong, a smooth-talking skull-shaped bong who rules the jungle (or something).

Alistair, once again played by a new actor (Peter Stickles), now works for the “Space Institute,” and the meteorite he discovers conveniently contains a sentient alien bong intent on enslaving humanity. Larnell is now a ninja, somehow, while Brett and Bachman run a head shop on Venice Beach. This installment really leans into its own awfulness, with multiple characters dismissing the alien bong as “a cheap movie prop,” and actors blatantly stumbling over their lines. Eebee is barely in the movie and is almost entirely irrelevant to the plot, which once again culminates in Bong World, where the characters are tempted by apparitions of topless women (with some green paint to indicate they’re aliens).

This crossover with fellow Full Moon character Gingerdead Man (a serial killer trapped inside a gingerbread man cookie) is where Band just turns the series into a vehicle for Full Moon cameos and product placement. Only Larnell returns from the original gang, now running his own head shop in Venice Beach (the other characters get written out in a single, tossed-off reference) next door to a bakery run by Sarah Leigh (Robin Sydney), the sole survivor of the Gingerdead Man massacre. The movie is padded out with clips from previous entries in the two series, and the promised fight between the title characters is more like a stern argument.

At just 53 minutes, Evil Bong 420 barely even qualifies as a feature film, and it essentially has no plot. The perpetually annoying Rabbit has taken over as lead character, and he now runs a bowling alley, where a bunch of Full Moon characters show up (there’s an entire subplot about selling Full Moon paraphernalia). Larnell is there, with his two competing love interests from previous movies, and the Gingerdead Man is now a regular supporting character. Eebee does nothing

of note until the very end, when she traps the remaining main characters in Bong World for what qualifies as a cliffhanger in this underachieving franchise.

Thanks to some trippy graphics, this movie’s Bong World is more fully realized, and it briefly seems like Band might go full-on surrealism and set the whole movie there. Instead, he returns Rabbit and Larnell to the real world to run a weed dispensary at Eebee’s command. It’s just an excuse for another parade of cameos, plus a full-on commercial for Full Moon’s line of “politically incorrect” (read: horrifyingly racist) collectibles. “He loves it in here. He’s got, like, bong-holm syndrome,” Larnell says of Rabbit’s existence inside Bong World, and anyone still watching these movies at this point probably suffers from the same affliction.

Maybe it’s just bong-holm syndrome, but this installment seems like a slight improvement over the last two; if nothing else, it tones down the shilling for Full Moon products. A Satan-worshiper named Lucy Furr (Mindy Robinson) takes over Eebee’s dispensary, using it as a front to collect souls. Eebee and Gingerdead Man return from “Sexy Hell,” which is ruled over by Beelzebud and accessed by a vagina-shaped portal, of course. Larnell is gone altogether, and Rabbit mostly just stands around the dispensary until he teams up with Eebee for the Frankenstein-style creation of the Gingerweed Man. At least Sexy Hell, with its Dali-esque painting of boobs and butts, brings in some visual flair.

The series’ most recent installment randomly brings Eebee, Rabbit and some leftover supporting characters to Las Vegas. There’s virtually no plot here, and Band finally indulges in full frontal nudity, as well as some unpleasant transphobia. At least he shoots most of the movie on location in Vegas, including on Fremont Street, at the Artisan (playing a haunted hotel) and at Tom Devlin’s Monster Museum in Boulder City (Devlin has worked on creature effects for much of the series). As Eebee notes, “These stories are confusing as fuck to keep straight,” but 777 ends without any resolution, which means that Evil Bong 888 is no doubt on its way soon.