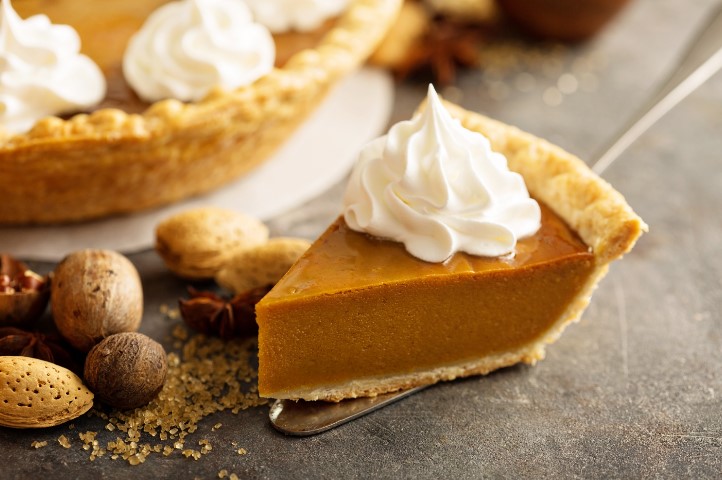 Directions for crust: In a small bowl, whisk together egg yolk, vinegar, and ice water. Set to side. In food processor, pulse together cocoa powder, 1 ¼ cups flour, sugar, and salt.

Add canna-butter and shortening, a few pieces at a time, until mixture resembles coarse sand. While machine is running, slowly add yolk-water mixture through feed-tube, until mixture comes away from sides of bowl, into a ball. Don’t over mix, you should see bits of unincorporated butter.

Turn dough out onto lightly-floured surface, flatten slightly then wrap in plastic and chill about 30 minutes.

In small saucepot, bring syrup and vanilla paste to a boil. Reduce to a simmer until mixture thickens, about 3-5 minutes. Remove from heat and slowly whisk in canna-cream in 3 separate additions. Gradually stir maple mixture into puree.

Remove dough disc from fridge. On lightly dusted surface, roll out into a 14” round. Transfer dough into pie dish, trimming edges, then fold under and crimp edges. Cover dough with sheet of parchment paper and fill with pie weights or beans. Bake in preheated oven just until crust looks dry, about 7-10 minutes. Remove paper and weights/beans. Lightly brush crust with remaining (fourth) egg, then return to oven to bake another 5 minutes. Cool.

Sprinkle cooled pie with finishing sugar then torch to brûlée until sugar is melted and dark brown. Garnish with canna-cream.