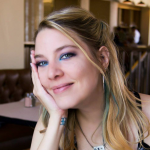 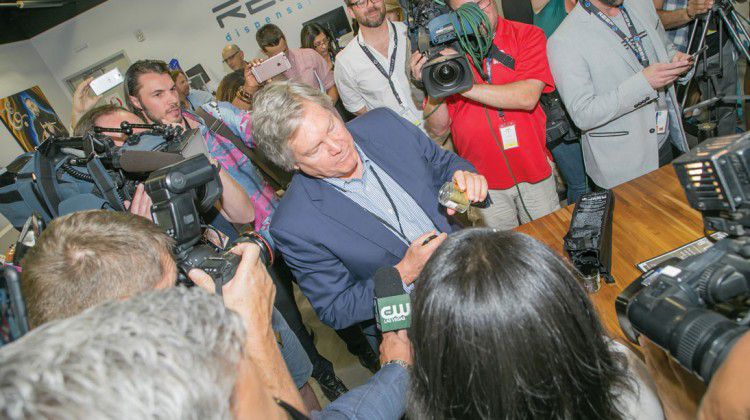 As the countdown to midnight approached Saturday, July 1, a line of over 1,000 people snaked around the 165,000-square-foot Reef Dispensary location at 3400 Western Avenue in Las Vegas. A DJ was spinning cannabis-centric tunes near the entrance as Nevada State Senator Richard “Tick” Segerblom arrived amidst the excitement.

A flurry of media followed him inside where he’d be the first legal recreational marijuana customer when the clock struck 12. As Nevada’s biggest supporter of legalization, it was only apropos he would make the first purchase on the historic occasion. As fireworks punctuated the sky signaling “Day 1” of legalized recreational cannabis, Segerblom purchased the sativa strain named after him: Segerblom Haze.

“It was very exciting,” Segerblom tells elevate of the festivities. “To see it actually happen and realizing that you can actually buy and use cannabis is pretty amazing.”

“I think the most rewarding thing was just the show of support we got from the community and how many people came out on opening night,” says Matt Morgan, CEO of Reef Dispensaries/Tryke Companies. “It had a huge wow factor to it and it made all the hard work leading up to that day definitely worth it.”

“I was impressed,” Segerblom says of the turnout. “We had no idea what it was going to be like. Our goal was to have it look like that but we weren’t sure it would,” he
says. “Obviously word had gotten out and the demand is
out there and everyone was very excited. It was like New Year’s Eve.”

Another thing Segerblom was wowed by? His strain namesake. “I didn’t actually try it early Saturday morning, but I have tried it and it works,” he laughs.

Recreational cannabis had such a high demand in the first week that it created hiccups throughout the Valley thanks to liquor distributors not being prepared to handle distribution on July 1. While Nevada’s medical cannabis business has a tried and tested process in getting product from growers and manufacturers to shelves, recreational rules prevented the recreational side of dispensaries from implementing the same system.

However, unlike some dispensaries that sold out of product, Reef was prepared. “We went into this thing with eyes wide open and we’re pretty—I guess you could say flexible—on demand,” says Morgan. “We went in thinking the demand may be a two multiplier, maybe an eight multiplier, we didn’t know for sure, but we were prepared for all scenarios and we were prepared to have an issue with transportation for a month or more if need be,” he says. “We’re not allowed to transfer from one room to another, even in a vertically integrated site,” Morgan explains. “Essentially how the law is written is an alcohol distributor would have to come into the building and walk it from one room to another, which is about 100 feet,” he says. “It’s madness; makes no sense whatsoever.”

Even though the state is on board with making things run smoothly, as a good portion of the taxes from recreational will go to helping Nevada’s next-to-last ranking schools, there are concerns that Attorney General Jeff Sessions, a vocal opponent of marijuana, may try to make an example out of Nevada and go after recreational cannabis. “Personally I’m not [worried],” says Segerblom. “I think if he wants to go after Nevada he’ll bite off more than he can chew,” he says. “You can tell by the crowds that you can’t put this genie back in the bottle. It’s a losing battle.”

Morgan also isn’t stressed. “I’m not overly worried just for the simple fact I feel Nevada has the strongest regulations in the country,” Morgan says. “I feel like if he were to make an example, I think it would be a different state.”

As far as consuming marijuana, you still can’t light up in public or even hotel rooms, thus many tourists are opting for vape pens and edibles. “We’ve definitely seen a spike in sales of both of those, especially the closer you are to the Strip obviously,” says Morgan.

But will we see consumption lounges for the pungent flower any time soon? “The bill I had died,” says Segerblom, “but it appears that the local jurisdictions have authority and they can do anything, so it’s really going to be up to the City Council and the County Commission to decide whether they want to do it,” he says. “I think, frankly, the hotels like it, the police like it and the demand to have some kind of lounges or coffee shops or whatever is going to be there, but it’s going to take a while.” With Segerblom setting his sights on running for the Clark County Commission next, perhaps a cannabis coffee shop isn’t too far off in the future.