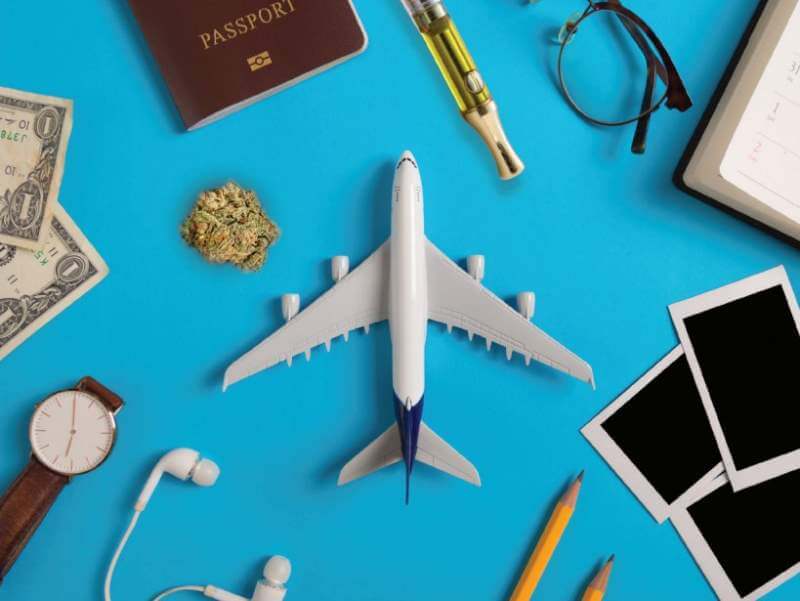 ‘Don’t touch my bags if you please, mister customs man’

‘Don’t touch my bags if you please, mister customs man’

As the holiday travel season begins, what ‘contraband’ is allowed at the airport?

As the holiday travel season begins, what ‘contraband’ is allowed at the airport?

Do you want to bring some cannabis on your next trip because your destination is barren of the plant that can heal ya?

You are passing through TSA screening at McCarran International Airport and your bag is flagged. So, you tell the smiling TSA agent you forgot about the ounce of weed you had in your carry-on. Does the agent put you in cuffs, smile, or send you to see the po-po? The real question is: Does the TSA even care anymore?

An 18-year-old who depends on cannabidiol (CBD) for anxiety travels with a vape pen. She travels by air often and has only been questioned once about having pure CBD in her carry-on luggage. Will a minor get hassled for a simple transport of CBD while leaving Las Vegas? If nabbed at the checkpoint, will she be sent to federal prison to serve five to 10 for drug smuggling?

When asked by a McCarran TSA agent, “what’s this?” the young traveler replied, “A CBD pen. I have a medical condition. I use it for anxiety. I have a doctor’s recommendation if you want to see it.” The agent replied, “No, not necessary.” Again, why waste time on checking the validity of a CBD vape pen even as the groundswell rages against vaping.

A 65-year-old traveler enters TSA with two carry-on bags, one contains a CBD-only product with the test results on the box, the second piece of luggage contains a bag 1/3 full of Black Forest Gummy Bears. The screener flagged the carryon with the gummy bears inside. He opened the small sports bag, snagged the gummies first, looked at the brand name, put them back in the bag and said have a nice flight.

On the return trip, the same traveler said some old baseball cards triggered a search into the piece of luggage containing CBD and the CBD was left alone. Flagged boxes of baseball cards? Understandable. They are dense and could be dangerous. But again, agents went right by the CBD that was now partially consumed. Agents tested no food, waived no chemical-sensitive wands. The agents cared only about security and that is the way it should be.

What happens if the TSA agent makes the discovery of a leafy green plant substance like the one Arlo Guthrie described, one that has no prescription?

Until recently, the result would have been a stiff sentence in the slammer. With recent policy changes, the agency that regulates the skies could care less about your high and refer all matters to local authorities for determination of punishment, if any.

At McCarran, anything less than one ounce is a nuisance. Despite the fact a police substation exists at the airport, officials are left with two options: let you go somewhere and smoke it or allow you to painfully dump your precious cargo in a designated bin.

The question is, how willing are you to risk it and are the TSA screeners looking for it?

Legally, cannabis can never be transported state to state. Additionally, not every county in states where it is legal is on board for legal possession. In Nevada, for instance, not every county has legalized cannabis.

According to the TSA, the culprit is referred to local law enforcement; in this case, the Las Vegas Metropolitan Police Department substation is summoned. Unless you are trying to smuggle a large quantity of herb, you now have the option of smoking it before you get on the plane (not sure where), going home or depositing it in the amnesty receptacle without punishment.

The TSA and Las Vegas Metropolitan Police Department have far greater concerns than passengers bringing a little weed onboard. As one Metro official told elevate, “the risk is on the passenger bringing in some cannabis to another city.” Hardly a concern as people are rarely searched while flying to somewhere domestic.

The TSA states on its website that its screening procedures are designed to detect potential threats to aviation and passengers. “Accordingly, TSA security officers do not search for marijuana or other illegal drugs, but if any illegal substance is discovered during security screening, TSA will refer the matter to a law enforcement officer.”

But what of the gray areas such as paraphernalia like vape pens? What about concentrates? Can a TSA screener know the difference between cannabis and tobacco products? Do they care? As one airline staff worker said when asked if her major airline cared at all about it, she gave a quick no.

The legalization of adult-use cannabis in 11 states and the national legalization of hemp-derived CBD last year has led to mass confusion about what can be transported to where. Recent CBD legislation included in the 2018 Farm Bill, however, has seen a laxed stance by air officials and has altered the way hemp-derived CBD can be transported for personal use.

Despite the “change” in policy, the fear of the weight of the deferral government is enough to scare the pants off most of the population. While stories abound about people getting through security with this or that, most are scared straight, even medical patients who have their own protocol that includes a doctor’s authorization. Then there’s the stigma of potentially breaking the law, bringing guilt, shame and the possible loss of your medical card

As one medical patient, barely 21, said of forgetting she had a pen with her cosmetics, “I felt like a criminal bringing my smoking device on a plane. I didn’t want to watch as they were digging through it. I was so nervous. Bringing “drugs” would be terrifying. Could the machine “smell me”? I don’t trust the government. I could lose my medical card. Any issues and I could lose the card for something stupid.”

Know Before You Go

Without fanfare, the TSA changed its cannabis policy in May to allow passengers to bring some forms of CBD oil, plus an FDA-approved marijuana-based drug, on flights. The change was prompted by the only FDA-approved drug that contains CBD oil, Epidiolex, which is used to treat seizures in children with epilepsy.

Before thinking about “bringing in a couple of keys (sic)” (ala Arlo Guthrie) as a medical patient, knowing about the rules of cannabis and CBD transport can keep you out of jail. Here is the revised language from the TSA website:

Medical Marijuana: Marijuana and certain cannabis infused products, including some Cannabidiol (CBD) oil, remain illegal under federal law except for products that contain no more than 0.3 percent THC on a dry weight basis or that are approved by FDA. (See the Agriculture Improvement Act of 2018, Pub. L. 115-334.) TSA officers are required to report any suspected violations of law to local, state or federal authorities.

TSA’s screening procedures are focused on security and are designed to detect potential threats to aviation and passengers. Accordingly, TSA security officers do not search for marijuana or other illegal drugs, but if any illegal substance is discovered during security screening, TSA will refer the matter to a law enforcement officer.

Prior to this policy change all forms of marijuana were prohibited in both checked and carry-on bags. But recently, the agency updated TSA.gov to reflect new regulations that allow FDA-approved medical marijuana and products that contain hemp-derived CBD oil. The CBD oil is allowed “as long as it is produced within the regulations defined by the law” under the Agriculture Improvement Act of 2018, which federally legalized hemp and hemp derivatives.

The TSA’s new rules still ban other forms of marijuana, including certain cannabis-infused products and CBD oils that have THC, which still are illegal under federal law.

It is not clear how the TSA intends to check whether or not a product contains THC. The TSA instead advises people to take their CBD medication at home prior to their flight and then find a dispensary at their travel destination, or to ship them where they are staying.

This change marks the first time the TSA has made a distinction between hemp-derived CBD products and any other form of cannabis. While the agency hasn’t stated exactly how they plan to enforce the new policy, they have stated in the past they do not specifically look for cannabis in the first place and if found some they would defer to state law enforcement since maintaining plane safety is the main task of the TSA, not playing the role of the Drug Enforcement Agency.

When in doubt, at McCarran International Airport in Las Vegas, there are “amnesty” receptacles before checkpoints for dropping off cannabis products that won’t pass TSA scrutiny or make you (more) paranoid.

A better alternative than serving five to 10 in a federal pen.