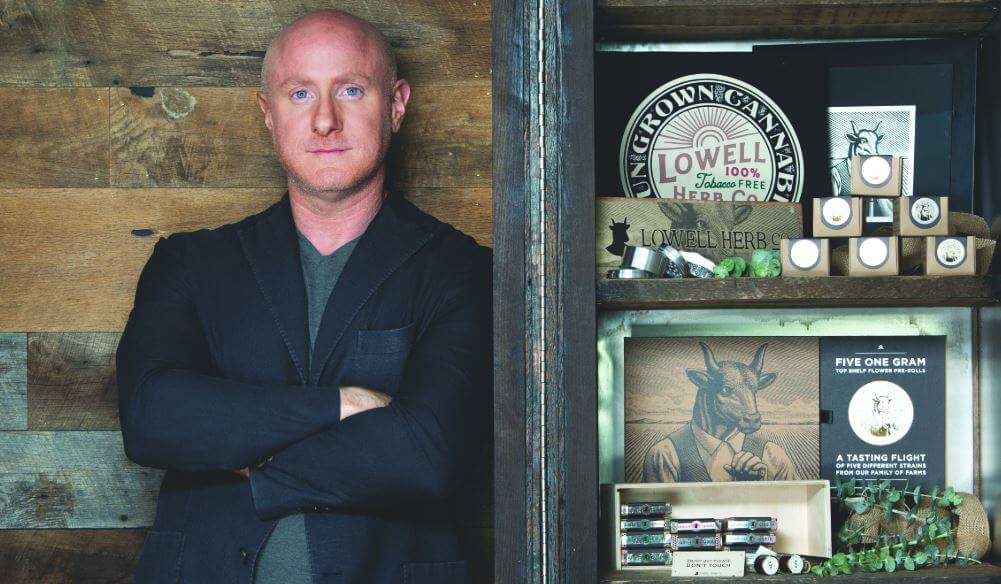 Over the course of his career, David Elias has been a marketing, finance, and technology entrepreneur in several successful ventures. But in 2016, he decided to tackle the cannabis industry. Elias entered the space with the intent to change how the American consumer viewed a pre-roll. Rolling 25,000 joints a day, Lowell Herb Co. has built a business around creating the perfect pre-roll.

What was so attractive about cannabis that would woo you into this space?

It was definitely the potential of what could be created. When we were thinking about this space three years ago, it felt clear that someone was going to create what we believe to be the first great American cannabis brand. And similar to a Levi's, that authenticity and the heritage of what we do with our farm partners, we work with these fantastic cultivators from all around the state, we put their information right on the front of our package.

We felt that creating community, creating partnerships with cultivators, being really mindful of all the aesthetic decisions that we've made, using natural materials from seed to sale—we felt like if we did that there'd be an opportunity and it got a lot bigger and went a lot faster than we would've thought. We launched the first quarter of 2017 and we finished the year as the number one pre-roll with about one-third of the market, about 30 percent market share in our first year. We've maintained the number one pre-roll in California, which is the largest, most competitive brand market in the world for cannabis. We've kept that going for almost three years now.

I wish there was a secret because then it would be a lot easier to replicate. But I think that being really sensitive to understanding consumers is really important. We wanted to give them the opportunity for the first time to feel really proud about their indulgence. We've got alcohol in these beautiful wood boxes and chocolates that come in this beautiful packaging but then cannabis has been brought to you in a plastic bag and you're in the corner rolling a joint. So, when we were created three years ago, we were one of the first to do all flower because originally the flower that was used was all from the bottom of the bag. We thought the consumer should have an actual real experience with full flower. So, we did our blends, we curated for flavor and effect. We did all flower, no shake, beautiful boxes shouting out the Instagram handle for all of our cultivators.

Was it your mission to build Lowell on a pack of pre-roll?

You're adept at creating viral sensations such as the flower crown at Coachella, the Valentine bouquet and the tasting flight for Hanukkah. Has that been part of your success?

I think there's a long list of a lot of things you have to get right, but I think our ability to get through the clutter, come up with really creative ideas, and know how to broadcast them is key. We work with really great creatives that support the brand and those kinds of ideas—they resonate with consumers. I think we're mindful of the importance of keeping it fresh and we're also aware of what's going on around us and we're constantly trying to be creative to merge the two. I think we're very focused on that. For this past year, we did our Christmas boxes for the holiday with the bull [Lowell Herb Co. logo] wearing a Christmas hat. And it’s events like this [Lowell Herb Co. hosted an outdoor pop-up infused dinner in mid-December at NuWu Cannabis Marketplace], this is a big event for us. To come to Nevada and launch the opening of a Lowell brand here and put together a restaurant in the middle of the desert that looks like it could have been here for a while, that's the kind of stuff we like to do.

Why enter the Nevada market now?

We waited until the time was right. We waited for the partnership here with the [Paiute] tribe. It was really important to find the right partner to launch with and the right timing. We needed to build a foothold in California, build our strength there and then slowly, west to east, find the right states. And obviously, Nevada's perfect. It's got great tourism. It's right next door. It's a great market.

You opened the Cannabis Cafe in West Hollywood. We're a couple of years away from doing something like that here, but might you eventually open one in Nevada?

What is the most surprising thing you've discovered about cannabis?

All the taxes, competition, the compliance and how hard that shift is from illegal to legal. It's still so many years later, still being figured out. So, I think it's just taking everyone a lot longer than they thought and it's a lot harder than everyone thought. And having been in startups for 20 years of my career and I've been fortunate to have success, the amount of what's new that you've never seen before that would normally happen a couple of times a year in a normal business, happens daily.

The group of people who are also creating these businesses that I connect with and speak with all share the same view—that it's a constant battle, on some front. You think you're getting something solved and yet you didn't even realize you're only halfway through solving it.

And to be doing all that while still building one of the strongest brands in California. So, it seems to me the shock of the cannabis industry is I'm amazed at how the response has been for the Lowell brand. Amazed by it. I'm equally amazed by the challenges that we face every single day to do this.

What's the one thing the cannabis industry needs to address in 2020?

Because we're in California and the industry is state by state, I will speak to the California situation. The challenge is with compliance, the challenge is with fluctuations in the price of flower on the California side. Then you go national, the fact that each state has its own rules, each state has its own set of restrictions and compliance that might be different than another state. And then while there seems to be some federal support, it still is nowhere near where we need it to be to turn into a normal business. For me, just continued improvement of the federal system understanding that this industry, operating in this manner, is not viable.