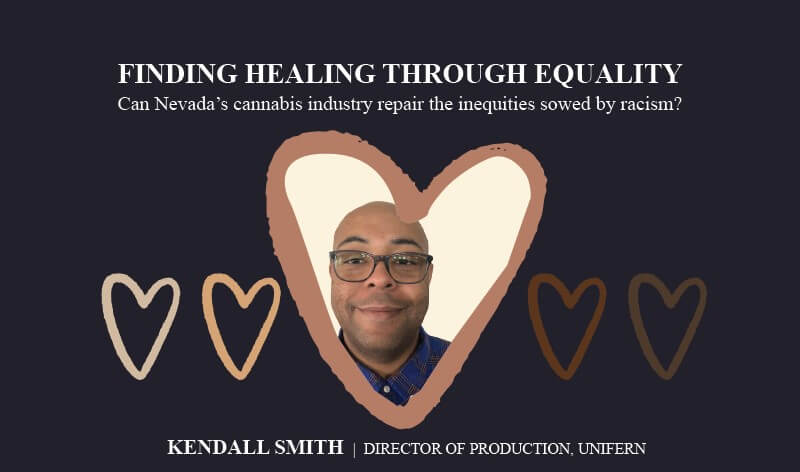 How did you get involved in the cannabis industry? I have been in cannabis since before there was any type of established marijuana system here. I have a background in product development and developing formulas in science for food. I used to do consultations in California, specifically in production and extraction. I would get hired by vape cartridge companies to evaluate and fix their manufacturing and extraction processes. If you are using distillate to formulate cartridges and your extraction guy is pulling low numbers on purity of extraction, I would evaluate what’s going on and I would get your staff to produce more potency out of your extractions and increase your dollar or return per gram. That’s where I started in the legal market, utilizing my chemistry background.

How long have you been at Unifern? I took over their production facility four years ago when they were just getting started. I helped build the facility. Now I’ve moved to more of a training role. I teach new staff to make my recipes that I license to Unifern. I own all the intellectual property that comes out of there.

From a business standpoint, how have you overcome barriers posed by racism in the cannabis industry?

I’m in a unique situation compared to some of my friends of color who work in the industry. They have to go the route of applying and interviewing for jobs and it’s those situations that open the door for bias and for racism to occur. In my situation, I have never had to apply for a job in cannabis. People have always called me. Because of my skills they needed me for whatever project they were doing.

But that being said, I have had situations where a business owner would reach out to me and we would have a great conversation that would go on for a week of back and forth discussions. Then I would go out to actually meet them in person and I would get there and I see the looks…once I show up I have always had to do extra to prove that I know what I am talking about and that I am qualified to do what guys asked me to come here to do.

If you call up a plumber and he gets there, you aren’t going to grill him on how to plumb. You called an expert and I’m the expert. I come in and now all of sudden your business partner is an expert and they are going to ask questions that they don’t even have answers to because you are not satisfied that I am qualified to do it and its purely based on my race and appearance. That’s sad. I have had that happen at least a handful of times.

I also get a lot of people who automatically assume when I tell them I’m in cannabis that either I sell weed, and not even in a dispensary, or when I tell them what I do in cannabis they are surprised. What is so surprising that? I am at the executive level? That I am not a grunt worker? Because you assume most people who look like me, are? That happens so much. Like I’m an anomaly or something, that’s really ignorant.

How has your experience been in Las Vegas as compared to other cities?

Las Vegas is a very diverse place, it’s not as bad here as Chicago. We still don’t have the level of ownership that we should but let’s set ownership aside. People of color don’t hold a lot of executive level or decision-making positions in our local industry. And I know a lot of people of color who are qualified to do the jobs of some of these people who I know aren’t qualified and have proven not to be qualified for some of these places.

A friend of mine had an exchange with one of the owners here who was very racially insensitive, and he basically said I don’t care about black customers or if they spend any money in my store. If you feel like that, that is one thing. But as a business owner if you feel like that than it is your fiduciary responsibility to not open yourself up to a situation where there could be damaging repercussions. He felt so comfortable that he was going to make money anyway that he could say whatever he wanted and there’s nothing anybody could do about it. I felt a shame that someone, as part of this community, would behave like that to anybody.

Is racism as prevalent in the cannabis industry as other industries you have worked in? Yes. I feel like cannabis itself isn’t special, it doesn’t have its own special issues. The racism in cannabis and the bias in cannabis is the same racial bias you have in any other industry when it comes to employment and employment practices. These people who opened these businesses had other businesses. It’s a cycle. It’s just another business to them. Its business as usual in all of their internal and corporate practices.

In June Gov. Sisolak unconditionally pardoned more than 15,000 people with misdemeanor marijuana possession convictions. What else needs to be done to promote equity in Nevada’s cannabis industry?

Our governor could take some cues from what they are trying to do Illinois or Oakland. They are trying to make a way or program where the point of it is to help minorities and people of color become cannabis business owners and operators. They are creating an actual effort to bring some sort of balance to the ownership pool. It starts with pardoning people. It makes no sense to have a flourishing industry when you have people sitting in jail for low level cannabis crimes or have records that prevent them from getting jobs because they have been convicted of an offense of cannabis.

Take some of those funds spent on tanks and military grade equipment and put them in a fund to create a pool of money to waive some of these application fees. I’ve been through the licensing process a few times and we know that they make it ridiculously hard to get a license, you have to have a few hundred thousand dollars in the bank. They make it very hard for someone of color who isn’t already a successful businessperson to meet the minimum criteria. Something has to be done to lower the bar so these people can participate. Like McDonald’s. You can’t own a McDonald’s franchise unless you go through McDonald’s University. Put them through an educational program but also give them the tools and resources that they will need.

Set aside some licenses in the pool and set up a structure so they can compete to own the licenses. You don’t have to cut big checks to people but you make resources available so they can get a foothold and get a business going. That’s cool that you expunged some records but too many times the people still don’t have the resources because the bar is set so high. And I get why the bar is set high, but that being said it’s set so high that good people don’t have a chance to be in this business.

Something has to be done to create a program to nurture people and make some type of qualification system. I’m not saying put everyone in the cannabis business but people who are able to go through a certification or a licensing program and show they understand what it is to have a cannabis business and run a cannabis business, they should be empowered to do so and that should be a minimum of 10% of our licenses here. It’s not like it can’t be done. We know that it can be done. Somebody has to have the guts to stand up and say this needs to be done. I would support any type of movement like that. It’s not just for black people, people of color in general are missing in this industry.

I would like to see more cultural representation in the products that are offered in the cannabis industry. I read a study that over 40% of cannabis dollars spent is spent by Latinos and almost no percentage of marketing budgets are dedicated to attracting those customers. So, you have these people who you don’t even spend money to advertise to that spend almost half of the money that you make. I feel like there should be cannabis producers who are producing products for culture.

When you evaluate how products sell and are marketed, we know people buy infused versions of products that they already buy. We know you can look up what a Latino consumer is most likely to purchase. So why not create those products and market them to that demographic? It creates a feeling of inclusion.

I go into the store and I don’t see products that represent me which is part of a bigger issue:  we don’t have these people in management to make these decisions or owner/operators who want to do a line that an African American or a Latino or Asian customer is familiar with. Nobody puts any thought or consideration into that at all.

I evaluate business deals for a Hispanic guy. I have been working with him to develop an all-Hispanic line of products, both CBD and THC, and the ad campaign is in Spanish. Why? Because nobody is doing it. Can you imagine how many people would be like I need to go get this? There are a lot of people who don’t speak English and they smoke weed. Why make it a more difficult process for them to want to buy something?

Flip that around. You go into a mercado and everything is in Spanish. Can you imagine that feeling of being lost or not understanding the language being presented to you? But you need to make a decision and spend your money.

So maybe the product itself isn’t inherently cultural, at least make reverse packaging so people can see something that’s familiar to them. You produce 1,000 bottles, wrap 100 or 200 of them in a label with a different language. To me that is inherently racist of our professional community. We are so oblivious to these people’s feelings, but we need these people’s money. I shop where I am comfortable and feel like I am appreciated, and I support brands that make me feel comfortable and appreciated. The industry is filled with people who don’t give a shit and they piggyback off of what is already being done. Some of it is not an effort of exclusion, the thought just doesn’t even occur to them.