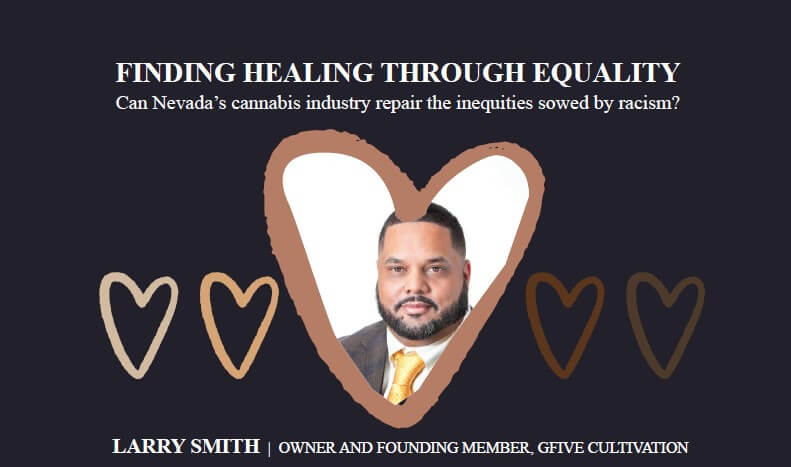 Why did you get involved in the cannabis industry? I started in 2015 with the medical program and applied for a cultivation license. At first it wasn’t on my radar, I was actually in New York and a friend called and said there was going to be some opportunity starting up in Nevada but I wasn’t too interested in the very beginning because Feds don’t like cannabis. I spoke to some attorneys in town and they seemed very interested it, so I took a deeper look. I started traveling to Colorado and the Bay Area to see what was going on and see the pitfalls. One of those attorneys I was dealing with, a very good friend of mine, passed away from opioids and that really affected me. I tried to get him to use cannabis because as I would meet people, I would understand that it was truly, really medicine for people. I came to understand that this isn’t what we have been taught and told this is. I decided this could help people because I’m giving people quality medicine.

Why did you opt for a cultivation license? I wanted to create medicine. My legacy is to know we are helping people. I am not saying cannabis cures cancer. But it gives me great satisfaction to know that someone reaches out to us and says, “I have Lupus, and my level of pain is a nine and when I smoke this strain it gives me a pain level of two and a better quality life.” It’s about the quality of life we can give people.

From a business standpoint, what have you had to do to overcome barriers posed by racism in the cannabis industry? I don’t think I can overcome anything. I just have to keep plugging away and creating good medicine. And I think at the end of the day the medicine speaks for itself. At this point, we have dialed it in and are getting really good genetics.

I did have one dispensary who wouldn’t deal with us. They told someone that we were gangsters. I laughed at that. They clearly didn’t know who we are because we do a lot of good in our community. I am born and raised in Vegas. It’s hurtful when they say stuff they don’t actually know. That’s effecting not only our livelihoods, but the people who work for us.

Were you surprised at being referred to as gangster? I didn’t even get mad. I just thought that person was very ignorant. If they follow us then they know we do a lot of stuff in our community, especially with the youth, even before we got into cannabis. We do yearly backpack drives, we give school supplies to the teachers. I was thinking this person has no clue who we are. We pride ourselves on doing the right thing, my son is a Clark County fireman, we have a good reputation and we want to keep that intact. I respect the state of Nevada. I respect where I come from and I don’t want to embarrass Nevada in any way, shape or form. I’m proud of my city. I am proud that we are trying to make some good decisions in cannabis, of course, there’s always room to do better. I’m not the angry black man. I think our city can change and get things done. It’s going to take some time and some effort. We need some allies to stand up for the truth and not just for what looks good.

How big of an opportunity has the shift due to BLM presented for you as far as equity? Nothing’s changed. I still can’t get a loan. It’s a bunch of talk. They may post that they’ve done this or are donating this to this person, but I don’t want your sympathy I just want to be treated fairly. I don’t want you to donate a million dollars to GFive. I don’t want you to like G5 because we are black owned. I want you to like it because we have a really good product and we just happen to be black owned. At the end of the day we just want to be treated fairly. When I go in for a loan give me the proper loan at the right interest rate. Don’t give Mark and me the same loan but you charge me 6% interest and he gets it for 3%. You are putting me at a disadvantage again. Let’s be fair about what we are really doing, and the banks are part of the problem. That’s all we want—liberty and justice for all.

Is racism as prevalent in the cannabis industry as other industries you have worked in?

In June Gov. Sisolak unconditionally pardoned more than 15,000 people with misdemeanor marijuana possession convictions. Is that enough? Anytime we are trying to move in that direction is good. To be arrested for growing something that you and I can go take a seat and grow in our home…it’s pretty bad. It’s a move in the right direction. If they have felonies, they can’t work in this industry, that’s ludicrous. Some of the best growers around have been busted. And you are telling me we can’t hire the best growers to come in and create good medicine? This is America if you go do your time, you should be given a second opportunity. This is what America is about. Sometimes the powers that be are flat out ridiculous.

Some have pointed out that the Governor’s misdemeanor marijuana possession pardons are empty because the people will have to jump through legal hoops to even see if they are eligible.

Here’s the thing when it comes to racism, it feels like every time we get an opportunity and they feel like they are doing something good for us, they’ll move the needle. And that’s a prime example, we will pardon you but you have to give us $2500 to do it. And that’s how African Americans feel when it comes to the real estate market when we try to purchase homes in certain areas. They have the infamous red line where the banks weren’t giving out loans for those people. That’s the problem. If you have access to capital that’s a big deal. It’s crazy to see the financial aspects of what really goes on.

What else needs to be done to promote equity in Nevada’s cannabis industry? I think they need to be a little bit more inclusive. I haven’t been invited to be on any of the boards or the Governor’s Task Force. I applied for one and I wasn’t picked. I am a native Nevadan, which pisses me off more than anything because I love the state of Nevada. I am born and raised here. When you see other people come from these other states and they get on the boards that pisses me off. I’m a native Nevadan first. I feel like the system is set up the way it is. I think they should lower the taxes and there should be some room for other people to get in this industry and it shouldn’t be the top dogs that are in there now.

Social equity programming would be really nice. Let’s really do it and make it the right way. Let’s not say we are doing this and then move the needle to make it hard for someone to get in. Let’s cut the B.S. and get things going because there are a lot of young entrepreneurs who are street hustling. And I am not just talking about the black ones, there’s a lot of white kids out there selling more cannabis than the black kids.

I think they can knock some of the numbers down for the entry point for groups to get in. You have to show that you have a minimum of $250,000 to get a license. Listen, if they were worried about the cartels…I don’t know if they watch “Narcos” or not, but that guy was making $60 million a day. That’s a way to eliminate brown and black people from being in cannabis. You have to show you have $250,000 to start a business. Where else do we have to do that? Make the license $10,000 and let these innovative young people go ahead and get their licenses. If my son came to me and said, ‘Hey dad, I need $10K to start a cannabis company and get a license.’ I can afford to give him that. There are a lot of families or kids who could scrape that up and get in the game and go. They have made it so the brown people can’t get in.

To me the great part about the recreational side is that cannabis brings people together. How many times have you passed a joint with someone you didn’t know, or you just met? Cannabis can be a racism killer by getting to sit down and talk to people. You are tokin’, you are rollin’ up together. It’s very tough though because there’s a lot of people who associate black people with crime and I think that’s why we got the gangster label. But that’s the system.

I love the fact that Trump calls it fake news because the news is fake to me. When you turn on the news and see the first story and see the African American was arrested for drugs or some violent crime then you see the custody chain of people they bring into the courthouse that day and they are not are all black. There’s a lot of whites that are in those courtrooms. And you wonder why was this person not on the news, his charges were that he sexually assaulted six minors and I think that’s pretty important to be on the news just like someone who got caught with 10 lbs. I would rather see the guy who is molesting minors on tv than the guy who is arrested for lbs. because I want to be able to look out for that guy to keep my kids away from him.

Are you glad you got in the industry? I am. I have met a lot of people who tell me privately that they struggle with depression and they’ve purchased some Big Baby Bud and it got them out of a funk. That to me is fulfilling. We like to make money, we just won’t worship it and that’s the difference. Money is just the tool to do nice things and go to a Laker game and sit a little closer to the floor, it allows you to eat a steak at a nice restaurant but it shouldn’t change who you are as a person. It shouldn’t change your actions as to how you treat people. We don’t make a whole bunch of money in cannabis; we make enough so we can provide for families. We can reinvest some of that money back into the community. It’s never mine, it’s just passing through. I think one of the great things about the plant is that it brings people together. For that reason alone, I’m glad we got in. The plant has taught me lessons that are beautiful all the way around the board.

Elevating the Conversation with author R ...