NBC puts spotlight on cannabis with series of special reports

NBC puts spotlight on cannabis with series of special reports 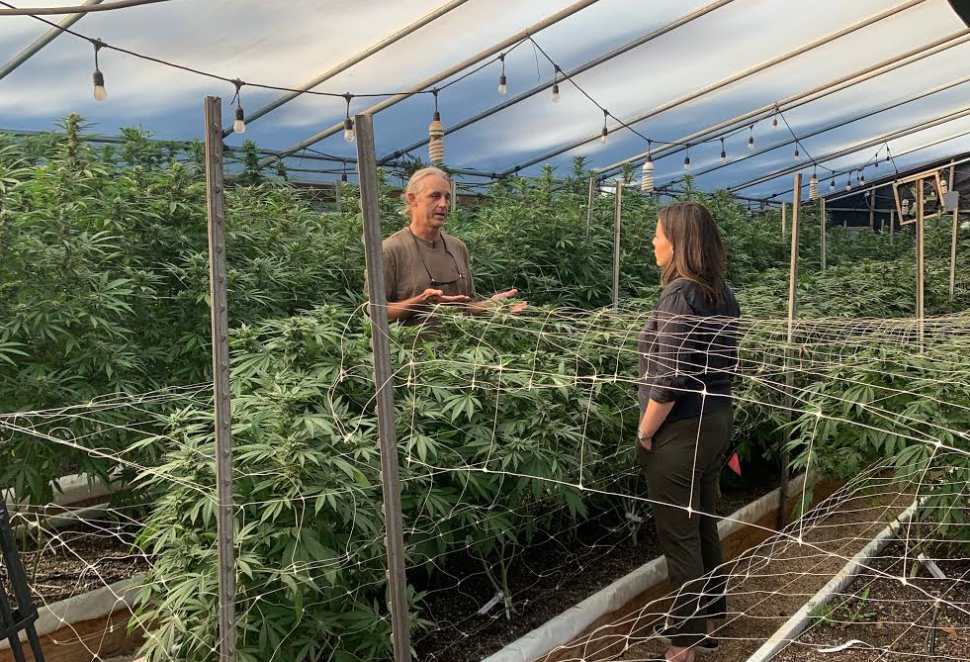 This week news conglomerate NBC is focusing on cannabis with special coverage that looks at the plant’s evolution as it becomes increasingly normalized. As of July 1, 18 states have legalized marijuana for medical use. In addition to those, 18 more states, plus the District of Columbia, have made cannabis legal for both recreational and medical use.

Hallie Jackson, NBC News Senior Washington Correspondent and anchor of MSNBC’s “Hallie Jackson Reports,” worked on a special report that focuses on a growing number of veterans who are increasingly frustrated with federal restrictions on medical marijuana. She traveled to Hawaii to speak with some veterans who have created a cannabis “co-op” to grow and distribute the plant to others who have served and don’t have access to its healing benefits.

elevate spoke with Jackson to get a preview of her upcoming story. Viewers can catch the full segment on MSNBC’s Hallie Jackson Reports this week as a part of NBC News & MSNBC’s week-long cannabis series, Red, White & Green.

Why is NBC zeroing in on cannabis this week?

NBC News is focusing on the Red, White & Green—specifically the future of cannabis in America. Cannabis has come a long way, even since the days when I was in high school. It's not tie-dye and Grateful Dead anymore. It's way more than the stereotype. So, putting the spotlight on that as cannabis grows up was something that's been really important to us. We worked on it here in Washington with Senator Tim Kaine of Virginia who has a bill coming out on this. I have been seeking comment from the V.A. (U.S. Dept. of Veterans Affairs) on this, although we are continuing to pursue that angle of it.

What piqued your interest about the topic of veterans and their access to cannabis?

As the senior Washington correspondent for the network, I cover all things Washington-related—bigger picture, longer form stories. And one of the things that we found interesting was this movement afoot on the Hill on an issue that's really flying under the radar. It relates to the legalization of cannabis as medical marijuana for veterans specifically, and some pressure, frankly, on the V.A. to try to do that. Congress is looking at possibly changing some laws to be able to make cannabis more accessible to vets who are looking at it with their doctors for medical treatment because right now they can't. So, there is some movement on legislation that is being introduced and that is one of the reasons why we decided this would be an interesting story to pursue.

Is that how you found this story? Through the bill Sen. Kaine is introducing?

One of my producers David Ingram, who been my partner on this story, had seen a local news article from our affiliate in Hawaii, or it might have been the local paper in Honolulu. We're always looking for stories that have a connection to Washington that are at the intersection of something that's happening culturally and something that's happening on the Hill. Looking beyond the Beltway for stories has been really fun. This is one of those stories where David said we should do something. So, I started researching it and found out more about what's happening in Washington on this. We thought we should definitely be talking more about this and elevating the story to a broader audience. It just so happened to coincide with this Red, White & Green week for NBC News that’s airing across many of our platforms.

What was most compelling about this story?

The thing that was most compelling to me was the people that we met in the course of reporting the story and the incredibly compelling stories we heard from veterans who are, frankly, desperate for Washington to do something to help them change the rules and get them the access that they say they need to be healthy. This is basic stuff to them. These are people who fought for their country, who put their lives on the line for their country, who are now struggling with everything from chronic pain to PTSD, whatever it may be. Who are now saying, ‘Listen, I don't want pharmaceuticals, I don't want opioids which my doctor at the VA can prescribe for me. I found that cannabis actually works better.’ And I would ask them, ‘What is your message to lawmakers?’ And across the board it was, ‘Please, please do something.’

We met other vets who are literally building the network around trying to make sure that vets can connect with doctors who can help them because the V.A. cannot help them in this regard. And it's not the V.A.’s fault, necessarily. This is a legislative issue at the federal level. So that's why there's the pressure on Congress to do something. But there are a lot of powerful lobbying groups and sometimes in Washington cannabis is not always at the top of that list, especially right now—you have infrastructure, police reform, gun violence, a slew of other things on the agenda for Congress and the Biden White House—and legalizing medical marijuana for veterans is not at the top of that list.

What struck you most about this issue?

One of the most striking pieces of this to me is just how passionate some of these veterans are at effecting change. And how, you'll see this in our story, some of them have just taken matters into their own hands. The reason we were in Hawaii is we went to this incredible co-op farm with hundreds of cannabis plants. But it is plants planted in part for veterans, by veterans. So, about half of the patients that participate in this co-op are vets growing these plants much more affordably. If they had to pay for cannabis out of pocket, they cannot get it—even though medical marijuana is legal in Hawaii—through their V.A. doctors. They're just trying to help each other out and learn different ways to be able to do this in an affordable way so they can have access to what they need.

In states where cannabis is legal, are veterans who receive federal benefits able to get access to it?

The vets we spoke to are getting it in ways that are legal in the states where they live. The issue is the access and the affordability piece. They can get it. They just have to pay a ton of money for it, more than maybe people who are their peers, who are not veterans. And that really is part of the issue. It's also about finding access. If you live in a place where there aren't dispensaries immediately available to you, where do you go? How do you find somebody to help you connect with those places? And so those are some of the pieces that come together in the story.

As far as Sen. Kaine’s legislation, is he hopeful he can find consensus?

During my exclusive interview with Sen. Kaine he seemed optimistic that it's something that could actually get done this Congress, which I thought was interesting. This rather narrow piece of legislation of getting veterans access to medical marijuana through the V.A. seems like something that could break through, partly because of the fairness aspect of it. If you and I live in the same state where medical marijuana is legal and you have access and you're a veteran and I'm not, I'm going to get my medical marijuana cheaper than you. But why is that fair for veterans? So, the point that Sen. Kaine and others have made is: We're just trying to level the playing field; why should these people be at a disadvantage?

I think the opioid angle is really interesting too. This came up a couple of times; your doctors can prescribe you a painkiller and that's fine, plenty of people do fine with opioids. There's also undeniably a problem in this country with that, and there are some people who say I don't want that…I don't even want to play with that. I can get treatment that helps me with my issue through medical marijuana, why should I not have that be an option?

What do you think viewers will find the most compelling about this story?

Probably one of the women that we met. You'll meet her in the piece. Her name is Jemma and she's retired Army. She served in New York on 911 and was one of the first responders to the site when the towers collapsed. She had some severe health fallouts from working at the site of 911 in the aftermath. She was incredibly sick with stage four kidney failure as she describes it. She lost an unbelievable amount of weight. She told me she had two babies and the pain that she felt from her sickness was worse than having children. She was just in a lot of pain. She said she was laying on her couch in New York, she could barely move. She had never really tried cannabis before, and her friend convinced her to come to Hawaii where she got high for the first time. There's this amazing moment in the piece when I ask her, ‘What happened when you tried cannabis for the first time?’ She said, ‘I got really, really high.’ She starts laughing and told me, ‘But you know what? The pain went away, and I could unhunch my body. I could relax and for the first time I wasn't feeling that pain.’ You should see her now, she is like this vibrant dynamo. She was showing off her muscles during our interview because she feels so strong and healthy. And I asked her, ‘Where would you be if you hadn't discovered cannabis? She said, ‘I'd be dead.’ She really believes that and she's not mad at the government. That's another piece of the conversation, by the way, she's not upset with the federal government. She loved her time serving. She's very grateful to have been able to serve the country. But she says, ‘You know, I know what cannabis did for me. I think it was a miracle.’ I think she just wants others to be able to have that kind of access and an affordable way. To me I think her story will really resonate with folks.

Is this a feel-good story? Or will viewers be outraged by the situation?

It’s somewhere on the spectrum between feel good to outrage. It's probably closer to a ‘Wait, what?’ reaction. Meaning, why is that fair? Or how is it they haven't fixed this yet? I think that's probably the reaction viewers might have. Even Sen. Kaine talks about how he's quietly gotten some Republican support for this. We also have to think about the issue that we're talking about here. We're not talking about legalizing marijuana federally, which is a huge deal and many detractors of that concept. We're talking about this sort of specific narrow carve out for people who have served their country. So, I think that's an important piece of it as well.

What was the most surprising thing you discovered about cannabis while you were covering this story?

One of the things that I really tried to get at in this piece, and that I think is important to talk about, is the way the stereotypes around cannabis are not what they were 10 or even five years ago. This is real business, and this is a real thing. I think that for some folks, there is a perception of what cannabis is and does that fits that cultural stereotype, if you will. And that's not really what cannabis is, or how cannabis is used by a lot of people. For some it is, sure, but for many people it's not. And I think that is one of the interesting pieces of this as well.