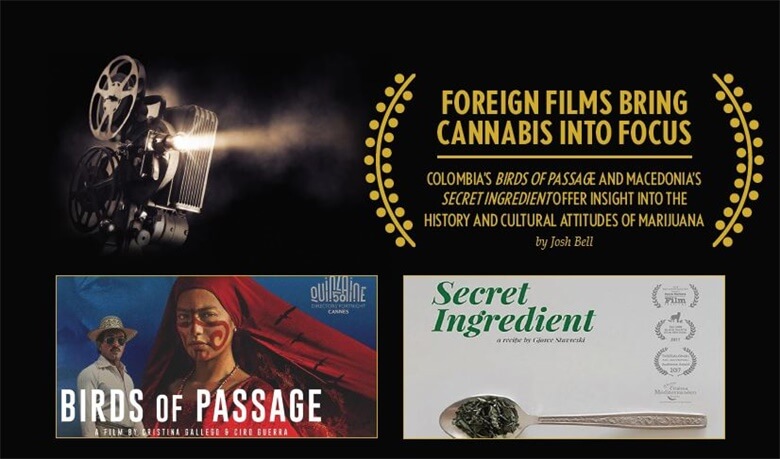 In recent years, the number of submissions to the Oscars’ Best Foreign Language Film category has grown significantly, with many countries submitting more consistently and others submitting for the first time. For last month’s Academy Awards, 87 countries entered films for the five nomination slots, and one of the highlights of the annual Palm Springs International Film Festival is its focus on the foreign language Oscar submissions.

This year’s festival in January programmed 43 of the submissions, and among the films I saw were two very different cannabis-themed stories (neither of which ended up on the final list of nominees). Birds of Passage (from Colombia) and Secret Ingredient (from Macedonia) both offer insight into the history and cultural attitudes relating to marijuana in their respective countries.

Co-directed by Ciro Guerra and Cristina Gallego, Birds of Passage is a period piece set from the late 1960s to the early 1980s, just before Colombia’s drug trade became notorious around the world. While Colombian drug lord Pablo Escobar has become ubiquitous in pop culture recently, thanks to films and series like Netflix’s Narcos, Birds of Passage looks at an earlier era, when the traffic in illegal drugs was focused on marijuana. And rather than a massive criminal enterprise, the movie focuses on a handful of members of the indigenous Wayuu tribe, who stumble into lucrative opportunities they never imagined would be possible. Inspired by actual events, Guerra and Gallego combine the familiar beats of a rise-and-fall gangster drama with a naturalistic portrait of tribal life, giving the film a unique perspective that transcends both genres.

The movie opens with a traditional tribal ritual welcoming a young woman, Zaida (Natalia Reyes), into adulthood. As Rapayet (Jose Acosta) courts the newly eligible Zaida, he is already making business plans, hoping to become a member of her influential family. To amass the dowry needed for the marriage, Rapayet forms a partnership with his Colombian friend Moises (Jhon Narvaez) to purchase marijuana grown by another Wayuu family and sell it to eager Americans. Not only does Rapayet succeed in marrying Zaida, he also sets himself on the path to becoming a pot kingpin, attempting to balance long-standing tribal values with his burgeoning drug empire.

The tension between time-honored traditions and modern temptations is at the heart of the movie, and it adds an extra layer to the crime drama storytelling. It’s not hard to predict that Rapayet’s story will end in bloodshed, and the narrative trajectory resembles crime movies from GoodFellas to Blow. As Rapayet’s house and clothes get flashier and fancier, Zaida sits home and frets about the safety of their growing family, and petty rivalries explode into violent confrontations. Zaida’s mother Ursula (Carmiña Martínez), the family matriarch, disapproves of the endeavor from the start, but eventually goes to whatever lengths she needs to in order to protect her family.

Guerra and Gallego add evocative mythical visions to the requisite gunplay, and Birds of Passage is as insightful about the changing fortunes of the Wayuu as it is about the growth of the drug trade. At the beginning of the movie, marijuana is just another crop for the Wayuu to cultivate, a harmless aspect of their agricultural way of life. Thanks to greed and the influence of outsiders, it ends up precipitating the downfall of one of the tribe’s most prominent families.

Secret Ingredient comes at the subject from the opposite direction. It takes place in a society where marijuana is heavily demonized and is conflated with other, harder drugs, all of which are labeled as absurdly dangerous (at one point, characters are somberly warned that drug use may lead to a compulsion for bestiality). Affable stoner Vele (Blagoj Veselinov) knows better, though, and he casually enjoys the occasional joint with his buddy Dzhem (Aksel Mehmet).

The real drug problem at the center of this Macedonian- set film is that the cancer medication Vele’s sick father desperately needs is prohibitively expensive, driving the elderly Sazdo (Anastas Tanovski) to the brink of suicide. Thanks to a weak economy, it’s been months since Vele has actually been paid at his mechanic job, so when he stumbles upon a shipment of illegal narcotics hidden in a train compartment, he seizes the opportunity (and the package).

Part of the movie is a lowkey crime caper, as Vele tries to avoid the bumbling thugs who are trying to get their drugs back. In the meantime, he uses his pilfered weed to create a treatment for his dad, a marijuana-infused cake based on a recipe he finds on the internet. Thanks to the authoritarian fearmongering, Sazdo is vehemently against marijuana use, so Vele concocts a lie about the cake that quickly spirals out of control. The medicinal cannabis relieves Sazdo’s pain and even possibly sends his cancer into remission, and soon it’s worked on a neighbor’s rheumatism, too. Deprived of professional medical care, Vele’s neighbors are eager for any kind of folk cure, and his supposedly magical cake turns into a high-demand sensation, much to Vele’s horror.

Writer-director Gjorce Stavreski offers pointed critiques of Macedonian society via mordant humor, but Secret Ingredient is never mean-spirited. The heart of the story is the tender father-son dynamic between Sazdo and Vele, who are both struggling to get over a past tragedy that tore their family apart.

There are a few goofy “unwitting old people get stoned” jokes, but most of the movie is more subdued, gently prodding at the ingrained prejudices and myths about cannabis that are just as insidious as the superstitions leading people to sham faith healers. Vele just wants to help his dad feel better and to take away some of the pain that medical professionals seem to shrug off—and it’s both darkly funny and poignantly heartbreaking the ridiculous steps he has to take in order to do that.

Birds of Passage is out now in limited theatrical release. Secret Ingredient is currently playing on the film festival circuit.