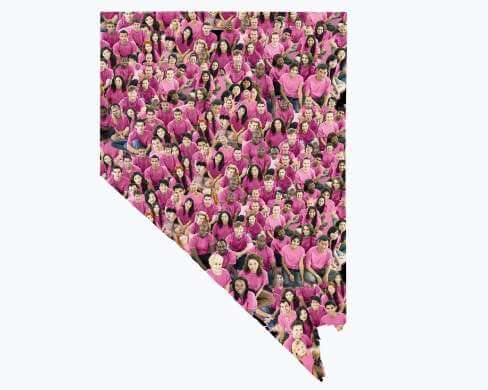 Every year an entire month is dedicated to the awareness of breast cancer. That might seem like overkill if it weren’t for the fact that breast cancer is the most commonly diagnosed cancer in women regardless of race or ethnicity, according to the Centers for Disease Control and Prevention (CDC). In fact, while we are on the topic of overkill, breast cancer is the leading cause of cancer death among Hispanic women, and the second leading cause of death among Caucasian, African American, Asian/Pacific Islander, and American Indian/Alaska Native women notes the CDC in its Cancer Incidence and Mortality Data.

However, the news is not all gloom, doom and death. The survival rate for breast cancer patients has improved. Four of every five diagnosed women in Nevada are now surviving the disease, according to the Nevada Cancer State Plan: 2016-2020 Refining Strategies for the Future of Cancer Control. The mortality rate for breast cancer has declined over the past decade due to earlier diagnosis as a result of improved screening and treatment that can help find cancer at an early stage before symptoms appear.

Now there is a new weapon in the arsenal of Nevadans who are looking for additional ways to be proactive about their breast healthcare. Although this new healthcare tool delivers an array of sophisticated information about your genetic makeup, all it takes to get some helpful answers about your predisposition to certain diseases is as easy as spitting in a vial.

“The overarching goal of the project is supposed to understand what drives health outcomes and then hopefully to improve them. We are all keenly aware of having an extremely complex and bloated healthcare system in the U.S. serving some but not all,” explains Joe Grzymski, Chief Scientific Officer at Renown Health and principal investigator of the Healthy Nevada Project. “But the fact of the matter is we also don’t really have a good grasp of what causes some people to transition from being healthy to being sick and others not.

“I always use the example when I am talking about genetics of someone like Keith Richards who has incredibly abused his body and yet still survives, and you hear about your friend or colleague who has passed suddenly from an unknown disease or sickness. So, we are aggregating all of these determined data, socioeconomics, behavior, environment, medical information when available, and then, of course, genetics and tying it all together to better understand what makes people sick and what keeps them healthy.”

Since its launch in 2016 the total size of the study has reached about 45,000 people with approval to recruit up to a total of a quarter million Nevadans to participate in the Healthy Nevada Project before its completion. “You need a really good sample size to understand the links between all of those health determinants and factors I mentioned,” expounds Grzymski.

Specifically, the Healthy Nevada Project is looking for the occurrence of inherited genetic variants in the state’s population that increase the risk of four diseases: Hereditary Breast and Ovarian Cancer Syndrome, Familial Hypercholesterolemia (FH), and Lynch Syndrome, a precursor to colon cancer.

Hereditary breast cancer is associated with the BRCA genes, which stands for BReast CAncer gene. There are two BRCA genes that are being reported on by the Healthy Nevada Project: BRCA1 and BRCA2. Everyone has the BRCA1 and BRCA2 genes, therefore a pathogenic BRCA mutation can affect both men and women. Grzymski estimates between 1 and 250 and 1 in 300 Nevadans will carry a pathogenic mutation for BRCA 1 and 2.

This study is important because screening for BRCA gene mutations most often happens after a person has already been diagnosed with breast cancer rather than before. For those who decide to get testing prior to any diagnosis the cost of BRCA testing is generally out of pocket and ranges from $475 to about $4,000, depending on the number of areas you are having tested.

Grzymski and his team are tasked with getting Nevadans key genetic information before diagnosis. “What we are hoping will happen is if we screen enough individuals and we report and educate on those risks, they will follow guidelines and the overall cancer risks will go down in the population,” he explains. “And over time as we communicate with more and more people, we should see the proportion of individuals with those inherited risks, their outcomes improve. Of course, that’s the billion-dollar question because it will take time and we will need to follow these individuals over a significant period of time.”

Individuals who participate in the Healthy Nevada Project study and consent will receive medically important results back. “Ninety-nine percent of the people in the study say ‘yes, I want to receive results’ and if they check that box and say ‘I want to receive results’ and they have one of those conditions, then we re-identify them,” says Dr. Grzymski. “It’s a really important part of the study to return those results and give people the proper information.”

From that point the Healthy Nevada Project has a partnership with a genetic counseling company who has licensed genetic counselors trained specifically to return the results in a responsible and medically valid manner, walking study participants through the next steps. “It’s up to the study to educate and then hope the individual follows the recommendations of the licensed genetic counselor and goes to their doctor and says, ‘Hey doc, I have a BRCA 1 mutation. What should I do?’

“The hope here is to use this study to further bolster and embolden medical research in Nevada. Unless you live without any access to any media, health outcomes, health research, public health funding, mental health availability, almost every aspect of public health research—Nevada is at the bottom,” Grzymski grimly notes. “And so, doing something here I would argue is probably even more important because it’s going to help bring in new funding, it’s going to help bring in new research, help bring in new doctors—all of the things that are lacking. There is a much more comprehensive picture besides a population health study run by Renown Health and a faculty member at Desert Research Institute—the implications will trickle down to the Nevada health community.”

[Editor’s Note: For those interested in participating in the Healthy Nevada Project, you must make an appointment at a designated UMC Quick Care office, fill out consent paperwork, and spit in a vial. healthynv.org]