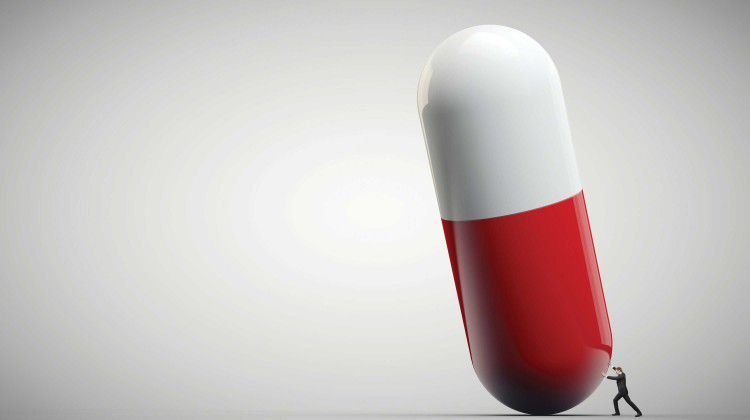 GETTING OUT FROM UNDER AMERICA’S OPIATE EPIDEMIC

GETTING OUT FROM UNDER AMERICA’S OPIATE EPIDEMIC

Can an illegal plant help a misguided country in its dire fight against addiction and pain?

Can an illegal plant help a misguided country in its dire fight against addiction and pain?

According to the most recent data from the Centers for Disease Control and Prevention (CDC), 2014 was a killer year. More people died from drug overdoses than in car crashes or by gun violence. And more than half of those overdoses were linked to opioid analgesics or heroin.

To put a finer point on this statistic, that’s 47,055 lethal overdoses. Of those deaths, 18,893 were from prescription painkillers and 10,574 were from heroine. Compared to the almost 30,000 who died by either car crashes or gun violence — those are some sobering stats.

When nearly 29,000 people die from an opioid overdose in one year — that’s 78 Americans per day — it’s safe to say we have an addiction problem of epidemic proportions. The CDC agrees.

This addiction crisis didn’t just happen overnight though, and it isn’t just about illegal street drugs like heroin. What led to our escalating dependence on opioids are simple American ideals like customer satisfaction, instant gratification, and profit.

Just What the Doctor Ordered

Prior to the 1990s, strong opioid painkillers were typically reserved for the dying, not for your run-of-the-mill acute or chronic pain patients. So while millions of patients were complaining about all kinds of pain, doctors were eager to find better solutions to ease their patients’ ailments.

Enter the industry leader in pain management: Purdue Pharma. The pharmaceutical company was already enjoying much success with its popular pain meds, including hydromorphone, oxycodone, fentanyl, codeine, and hyrocodone, but apparently it wasn’t enough to satiate patients’ pain complaints, doctors’ desires to relieve their patients’ pain, or the pharmaceutical company’s quest for more profit. So after some tinkering, in 1996 it slapped a time-release element onto oxycodone (ensuring a new patent and exclusive sales until 2025) and crowned it OxyContin.

OxyContin is the company’s golden child, or rather its golden goose, and Purdue did everything in its power to promote it far and wide as a miracle drug. Armed with its “new” formula, Purdue Pharma set out to proselytize the medical community, claiming that because of the time-release component, OxyContin was nearly impossible to abuse and its risk of addiction was “under one percent.”

That was music to doctors’ ears. Who wouldn’t be sold on a powerful narcotic that was great at helping a wide array of chronic ailments and only boasted a mere 0.028 percent addiction rate?

Physicians ate up Purdue’s marketing campaigns and patients gobbled up the pills as fast as their docs could write a ’scrip. The plan was working. And starting in 2012, according to CDC data, doctors prescribed enough opioid painkillers to give a bottle of pills to every adult in the country.

But the information Purdue Pharma was aggressively spreading was misleading at best, and flagrantly false at its worst. The company not only promised its drug was safe, it harped on its effectiveness and ease of use. Oxy sales skyrocketed.

OxyContin and other opioid painkillers are powerful drugs that are an effective treatment for addressing chronic and severe pain, but with long-term use its addictive properties betray its benefits. Patients’ tolerance builds so rapidly that users need ever-increasing doses to achieve the same initial effect. Forget the marketing mantras, addiction was inevitable.

A Prescription for Addiction

As it turns out, the three “studies” Purdue Pharma based all of its “educational” information on were misrepresented, exaggerated, or fictionalized. In a review by the FDA in 2001, Dr. Art Van Zee concluded that Purdue Pharma had “oversold the benefits of opioid therapy for chronic non-malignant pain, while providing false reassurance about what the real risks are of addiction for patients taking (them).”

The time-release component was supposed to be a great safety feature but it was just a thin, waxy coating that was so easy to scrape off it was as if it was actually designed to be abused rather than be a deterrent. Sadly, when the pills and prescriptions ran out, for many people, it was just easier and cheaper to turn to street drugs like heroin to catch the same elusive highs.

The American Society of Addiction Medicine (ASAM) reports four in five new heroin users started out misusing prescription painkillers. The overdose death rate quadrupled between 2000 and 2013, with an average increase of six percent per year up to 2010; from 2010-2013 heroin overdoses increased 37 percent.

Meanwhile, Purdue Pharma, fully owned by the Sackler family, was rolling around in piles and piles of profits. In 1996, OxyContin’s freshman year sales were $40 million dollars. Five years later, sales ballooned to $1.1 billion; by 2011, $2.8 billion.

On the flipside, in the biggest-littlest coup in pharmaceutical lawsuits ever, in 2007 Purdue Pharma and three of its top executives were court-ordered to pay a $634 million penalty for misbranding OxyContin. No one went to jail. The penalty only amounted to less than half of the company’s annual OxyContin sales that year. It was more like ripping off a Band-Aid; it hurts for a second but you’re okay. Today, the Sackler family is sitting pretty on Forbes’ magazine list of Top 20 Wealthiest Families with a conservative estimated net worth of $14 billion.

The company is still marketing its pain pills, but now they do it under the industry-accepted guise of “public-service” programs, resources and informational web sites aimed to educate doctors, pharmacists, patients, families, and law enforcement on the benefits of opioid pain meds for chronic pain as well as some nods to prescription drug addiction.

One positive to come of this marketing-blitz-turned-public-health-crisis is that more formal government attention (but not necessarily more money) is being placed on the epidemic and some efforts are underway to begin addressing it. The CDC presented guidelines and in July President Obama signed the Comprehensive Addiction and Recovery Act in to law. Both of these measures discuss multiple pathways to improving the prescribing of opioids, expanding treatments for addiction, and reducing access to illegal opioids.

The Elephant in the Exam Room

While recognizing the problem is a noble start, the elephant in the room remains. As everyone’s looking the other way trying to find options for handling painkillers in a more responsible manner and dealing with addiction, nobody’s addressing the core issue.

“Western medicine doesn’t always have all the answers so let’s look at what will actually help patients versus just shoving a pill down everyone’s throat. Some people can’t sleep so we give them a sleeping pill versus actually figuring out why they can’t sleep. If they have pain, we give them pain medication. If they’re having anxiety, there’s a medication for anxiety versus figuring out why they have these symptoms. We have become a society of people looking for quick fixes. This is how all the doctor shopping and patients going to pill mills was created in the first place,” offers Dr. Pouya Mohajer, a local pain management doctor who is part of NuVeda, which holds six medical marijuana establishment licenses in Nevada, two of which are for dispensaries.

Another local physician, Dr. Timothy Beckett of Valley Center for Cannabis Therapy, agrees. “The time when we’re just going to throw a drug at an illness is coming to an end. We’ve gotten ourselves in trouble time and time again because of that.

“So bringing in something like medical marijuana, which certainly doesn’t have the addictive potential that something like opioids has nor does it have all of the horrible side effects or potential overdose and death associated with it, is a fantastic thing to bring to this whole regimen of treating opioid abuse and pain.”

Drs. Beckett and Mohajer are not alone in exploring cannabis as an alternative. More and more, doctors are turning to cannabis as an option for weaning people off opioids, and with good reason. A July 2015 paper published in theJournal of the American Medical Association (JAMA) cited evidence that cannabis is effective at treating chronic pain. The JAMA review found "30 percent or greater improvement in pain with cannabinoid compared with placebo," across 79 studies it surveyed.

In a study published by National Bureau of Economic Research (NBER), also from July 2015, titled ‘Do Medical Marijuana Laws Reduce Addictions and Deaths Related to Pain Killers?’, researchers found that access to state-sanctioned medical marijuana dispensaries is linked to a significant decrease in both prescription painkiller abuse, and in overdose deaths from prescription painkillers.

In the NBER study, authors reviewed admissions to substance abuse treatment programs for opiate addiction as well as opiate overdose deaths in states that do and do not have medical marijuana laws. Researchers found that the presence of marijuana dispensaries was associated with a 15 to 35 percent decrease in substance abuse admissions. Opiate overdose deaths decreased by a similar amount. "Our findings suggest that providing broader access to medical marijuana may have the potential benefit of reducing abuse of highly addictive painkillers," the researchers concluded.

Dr. Beckett has seen it prove true in his practice. “I think it’s been tremendously successful in solely treating pain. I’ve seen fantastic results in patients. For the patients who come here who are truly motivated to get off of their opioid or to, at least, reduce the consumption of opioids, again, it’s been very very successful. I can’t think of an instance where medical marijuana wouldn’t in some way or another reduce the amount of pain and/or opioid dependence that a person would be experiencing,” he explains.

Dr. Mohajer has also found cannabis to be effective, noting that 80 percent of the patients he has seen experience a positive response. “Anecdotally, I do have the patients who come back and the ones that it’s working for, they are the ones who we start cutting their narcotics down as much as we can,” he explains.

Could Cannabis be the Remedy?

But cannabis doesn’t just aid in getting people off opiates, it also addresses the underlying problem.

“Cannabis actually has a lot of the anti-inflammatory properties that are necessary to fix things that are at the root of the pain itself,” explains Dr. Beckett. “When we give somebody cannabis for their pain issues, we’re literally treating it in two phases. We have this acute, within 24-hour, phase where the cannabis itself is going to make you feel good, it’s going help change your perception of the pain, it’s going help change the way you experience the pain.

“Then we have this kind of delayed response that is the real meat and bones of it, which is the anti-inflammatory effects of the CBD (cannabidiol) property of the cannabis. It’s basically quieting down those nerves, quieting down the swelling and all the problems to get to the root of the actual pain itself,” continues Dr. Beckett. “That’s why a person who uses medical marijuana twice a day in 50 years could probably still be using medical marijuana twice a day or maybe even less to treat that same ailment. Whereas, if you look at somebody on opioids, they could be using two pills a day and in six months they’ll be using 20 pills a day."

JBut is cannabis the solution? “I’ve been practicing for 13 years and this is the only thing that I’ve come across that has such widespread medicinal benefits or health benefits for so many different classes of patients,” concludes Dr. Beckett.

“And we haven’t even hit the tip of the iceberg yet for all the different benefits that we’re going to be able to find in the long-run with something like marijuana.”

Opiate abuse by the numbers