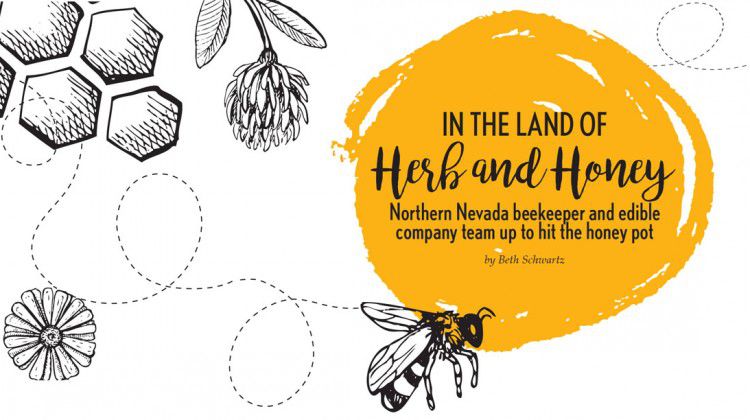 In the Land of  Herb and Honey

In the Land of  Herb and Honey

Timothy Keenan will be the first to tell you he is a self-proclaimed honey aficionado. Growing up, Keenan’s parents were beekeeping enthusiasts who kept a couple of backyard hives. “Those are some of my earliest and fondest memories of collecting honey when I was a child so that kind of stuck with me throughout the years,” explains Keenan. “As I have traveled the world over the last 10 years I have tried to collect as many honeys as I could -- like honey from Africa and Amazon and southeast Asia. I have a love for it, same as cannabis in a sense.”

So, it only makes sense that Keenan, who as Sales/Outreach Manager for Cannabella, would take the lead on the edible company’s honey product line when it was proposed earlier this year. “When we decided to do honey, I was lucky enough to be put in charge of finding the honey I wanted. I looked at different varietals, and looked at the various regions they were from, such as orange blossom versus sage,” says Keenan of his search which began in February. “I was after color, consistency, and flavor -- I wanted light and floral almost fruity versus a dark, robust honey. I wanted it to be nice and light and local so we can all benefit from local pollen for allergies.”

During his research Keenan tried varietals from a half-dozen beekeepers with most being from Northern Nevada. “Varietals will change throughout the year based on different harvests and different places. I ask what region it’s from. It’s not going to be 100 percent Manzanita Brush or Orange Blossom; as an example, bees only fly two to eight miles to get their honey. Beekeepers put all of their hives next to an orchard farm knowing that’s where bees get a majority of their honey from and there might be a little bit of wildflower mixed in too.”

Keenan eventually selected a Manzanita Brush honey from Reno beekeeper Al Sindlinger who started with just two hives 20 years ago and now has 200 with some hives playing host to as many as 100,000 bees. “In the summertime, I fight fires and I do the beekeeping in between all that. I keep the bees or more like they keep me,” Sindlinger offers with a chuckle.

He, too, got into beekeeping as a hobby but it quickly went from a sideline hobby to a sideline business that he spends an average of 30 to 40 hours a week on, depending on the time of year. “I was living out in Elko and I had a garden and I really didn’t have any pollinators for it. I had a bunch of cucumbers growing with no pollinators so I thought maybe I should get some bees to pollinate. That’s kind of how it started. So, I picked up some books and taught myself through trial and error and I learned how to keep bees.”

Now residing in the Reno area, Sindlinger starts the year by taking his bees to the almond orchards “because that’s kind of nice to help them build up. Almond contracts are kind of tricky because they want mid-summer strength bees at the first of February so you have to kind of keep your bees pretty healthy and stimulate them and feed them so they start building up,” expounds Singlinger, who lets his bees collect their own honey and feed themselves. “I will feed them sugar. I don’t use high fructose corn syrup. I don’t like the generic connotations of feeding them that. I think it wreaks havoc on a bee’s immune system.”

In an average year, Sindlinger produces between 10 and 12 55-gallon barrels of honey. Although in recent years it has been on the lesser side due to the five-year drought that plagued Northern Nevada. “It was discouraging during the drought because a lot of your bees die off. We had a drought from 2012 to 2016 that just broke this past year. I had to move my beehives and be kind of crafty during the drought and find places way up in the mountains where there was a little bit of water and moisture so the bees could make the honey,” adds Sindlinger.

Noting honey has medicinal qualities, Sindlinger shares a story of a couple of people with Parkinson’s disease who started using his Rabbit Brush honey and were, in turn, able to stop using medication for the disease.

The medicinal qualities of honey made it a perfect fit for Cannabella’s mission of providing the highest quality, scientifically-based health products to cannabis dispensaries throughout Nevada. Noting his values align with Cannabella’s, Keenan explains, “part of my personal motivation for looking at things like honey or products with natural sugars is my mom is diabetic and so this is something that I can offer to her that is more diabetic-friendly with the natural sugars,” he says.

In addition to diabetics, Keenan notes that Cannabella’s honey works well for cancer patients. “It’s best used for people who can’t tolerate eating or have throat or stomach cancer or just have digestive issues in general. They can’t handle an edible and don’t want to smoke but I have been hearing feedback from cancer patients that it is the only thing that they can consume.”

On the lighter side of the ailment spectrum, Cannabella’s Sierra Nevada honey is also used by those who prefer not to smoke, seasonal allergy sufferers, and as a sleep aid used in tea at nighttime or taken by the spoonful. Keenan’s favorite way to eat honey is straight. “I am such a honey fan I enjoy it in lieu of candy. When I get that sweet tooth at night, I will feel a lot less guilty having a teaspoon of honey instead of eating a Snickers bar.”

Noting he has a palate for honey and cannabis but not for beer, wine or anything else, Keenan is “pleased with what we have out there because it’s nice and light. It doesn’t have an overly weedy flavor. I like our honey over others. I have tried many cannabis honeys and many are very cannabis forward, very weedy flavored. We wanted something more subtle with just enough cannabis flavor to know it’s in there. That’s the way our whole product line is, there’s just enough of the cannabis flavor to know it’s in there,” he says, adding that it needs to be good enough for mom or grandma.

Keenan sees the possibility of more Cannabella honey varietals. “We might look into different flavors or a darker more robust Rabbit Brush honey which has medicinal properties and do that in the future,” he reveals.

But for now, it appears Keenan has found his sweet spot. “Cannabis and honey have been two of my loves for the majority of my life and to see them come together and get attention is wonderful,” concludes Keenan. “The more people we can help, the better I will feel about it all.”