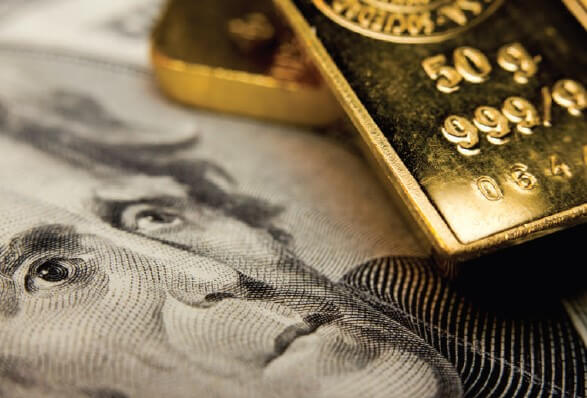 As a two-year legal fight over Nevada’s recreational marijuana dispensary licenses plays out, a question remains: Did the Nevada Department of Taxation’s management of the cannabis industry’s licensing process tarnish its golden image?

As a two-year legal fight over Nevada’s recreational marijuana dispensary licenses plays out, a question remains: Did the Nevada Department of Taxation’s management of the cannabis industry’s licensing process tarnish its golden image?

Nevada has often been referred to as being the gold standard of cannabis compliance and regulatory oversight, so it has come as a bit of a surprise that its image has been tarnished with an almost two-year legal battle. At the heart of the lawsuit, dubbed World War Weed, has been the Nevada Department of Taxation’s management of the state’s recreational marijuana licensing application process. The highly contentious conflict over Nevada’s very lucrative retail marijuana licenses, metaphorical golden tickets if you will, has centered around 61 licenses that were awarded in late 2018 to 17 companies out of 127 that applied.

Unfair practices during the licensing application process were alleged by the plaintiff companies who were not awarded licenses and, in turn, filed suit to uncover what went on during the nontransparent grading process. In our October issue, elevate published an interview with the plaintiffs’ lead attorney Ross Miller detailing his assessment of the injunction hearing in 2019, partial settlement, and trial that took place during this past summer.

Miller and his team lost the trial, however, in her ruling, Judicial District Court Judge Elizabeth Gonzalez asserted that the state’s Department of Taxation (DOT) acted “arbitrarily and capriciously” and went “beyond its scope of authority” to change evaluation rules. While Judge Gonzalez’s ruling found numerous faults with the state’s process and gave credence to many of the complaints brought by plaintiffs, it didn’t overturn the process, award monetary damages or grant new licenses.

Even though Judge Gonzalez found fault with parts of the DOT’s application process, two cannabis companies, who were defendants in the lawsuit, have stood behind the Department and its recreational licensing process. “The+Source, for over 18 months, had expended considerable resources to assist the DOT in the defense of its application process, a process that we believe was conducted in accordance with applicable law and should have been left undisturbed,” says Brandon Wiegand, regional general manager of The+Source, which received seven of the 61 recreational marijuana dispensary licenses awarded in December 2018.

Mitch Bitten, CEO of Thrive, which was awarded six recreational marijuana dispensary licenses in 2018, agrees. “The Department of Taxation did an excellent job in developing the 2018 recreational application and grading process to ensure it met the standards and deadlines set forth in NRS 453D and maintained impartiality of the independent graders who were tasked with scoring the application process,” he says. “Because the 2018 application process was open to only existing marijuana license holders, it was important for the Department of Taxation to hire and train independent contractors to review and grade both the identified and non-identified portions of the application.”

The independent graders hired by the state that Britten references have been one of the lightning rods in the protracted licensing battle. One of the issues that plaintiffs found fault with was that the state of Nevada used temporary workers from Manpower staffing agency to grade the recreational marijuana applications. “They turned over the evaluation of these applications to temporary employees who weren’t adequately trained and scored these applications in a manner that was completely different from the 2014 review process,” offers Miller of the graders.

Using contractors is standard operating practice by the state, according to a statement from Melanie Young, Executive Director, Nevada Department of Taxation: “This process has been in place since 2015 for cannabis licensing and use of contractors is a common practice to accomplish temporary tasks efficiently for the state. All state agencies are approved by the Department of Administration to use temporary hiring agencies including Manpower. The Marijuana Enforcement Division does not have full-time staff dedicated to application evaluation and the Division could not be expected to pull nearly a quarter of its staff from regular duties regulating the industry to evaluate applications for three months.”

Specifically, with regard to the state’s 2018 recreational marijuana licensing application process, Young’s statement reads: “In June 2018, the Department was approved by the Interim Finance Committee to use Manpower as a vehicle for hiring qualified temporary employees to evaluate license applications. This method translated to more consistency and efficiency in the cannabis licensing process to meet legally-mandated deadlines. Training involved weeks pouring over thousands of documents and intense one-on-one and group evaluation activities to prepare contractors for scoring applications. Additionally, by using contract employees to review and score applications, the Department could ensure an objective and independent process carried out by reviewers with no pre-existing relationships to, or insider knowledge, of the applicants.”

The case’s plaintiffs, led by Miller, also alleged the DOT’s actual application in the recreational marijuana licensing process was flawed and geared toward a group of insiders. “There was a proven model for how the Department of Taxation should have administered the evaluation process for these applicants to be awarded a dispensary license. The state spent a considerable amount of money bringing in consultants and administered a fair process in 2014 (during the state’s medical marijuana licensing process which was overseen by the Nevada Division of Public and Behavioral Health). All the Department of Taxation needed to do was follow that same process,” explains Miller. “The Deputy Director dismantled key provisions of the 2014 process, so that they would be able to provide information to a select group of insiders as to how these applications were going to be evaluated and scored, and not all applicants understood the rules the same way.”

Miller stands by his assertion that the playing field was not the same for everyone as far as the actual application. “Some of our clients understood rules that were much different than other clients. A couple of our clients knew when they applied that they could apply for as many locations as they wanted throughout the state, and they didn’t have to rank those applications through a proposed specific location, which was not the standard in 2014. Only some of them knew that rule. It wasn’t communicated equally to everyone. So, we knew that there were huge rules that the Department had taken interpretations on that they had only communicated to select applicants that gave people a significant unfair advantage.”

Bitten sees it differently, offering that “the evidence in the trial clearly showed the 2018 application process was fair and the scoring was a direct reflection of the time and effort the successful companies put into the application process. There were some good companies who did not prepare complete applications or did not follow the clear instructions in the application that lost points and ultimately did not get a license. The plaintiffs made very serious accusations in their complaints and through the media, but when it came time to testify at trial only one of the 32 plaintiffs voluntarily appeared to testify at trial.”

Wiegand also defends the state’s process, saying “we believe the process used by the DOT was rigorous and fair, and that it provided a suitable method to award the best applicants recreational cannabis dispensary licenses.”

In the end, Judge Gonzalez agreed with Miller and the plaintiffs, concluding Nevada’s Dept of Taxation created an “an uneven playing field because of the unequal information available to potential applicants.”

As the trial was beginning this past summer a partial settlement agreement was reached. Several of the plaintiffs opted for a settlement rather continuing to pursue the legal course that had begun the previous summer. The settlement reshuffled ten of the 61 recreational marijuana licenses that were awarded in 2018 from approved defendants to plaintiffs and, in turn, several cannabis companies dropped out of the trial. The+Source agreed to transfer two of the seven licenses it received and Thrive transferred its conditional Henderson license and received a Douglas County license in return.

For The+Source, “the decision to transfer certain licenses was not made lightly. But the prospect of an adverse ruling, a lengthy appeal process, and continuing legal costs, when balanced against the ability to begin opening stores, made it a relatively easy decision for most involved in the litigation,” says Wiegand. “We believe, given the circumstances, that the settlement is best for both the industry and for the state. It removes the uncertainty of litigation, provides greater access to the cannabis market throughout the state, creates jobs for Nevada residents, and increases tax revenue for the state.”

Bitten concurs. “Thrive felt that a partial settlement was in the best interest of the cannabis industry as a whole in Nevada and was the best option to move on from a lengthy and expensive litigation to focus on getting its dispensaries up and running.”

The remaining plaintiffs who chose not to settle continued with the trial.

Although the plaintiffs lost and did not get the licensing process overturned, their legal pursuit was not all for naught. One takeaway that resulted as the pre-hearing legal wrangling began to heat up when the plaintiffs filed litigation to halt the DOT’s licensing process was the necessity for more transparency during the application process. A step toward a more transparent process has now been put in place with the passage of Senate Bill 32, signed May 10, 2019. Prior to its passage, information in cannabis applications and about licensees was strictly confidential. According to Young, this is the result of merging two statutory and regulatory structures that deal with highly sensitive information: medical cannabis, which necessarily protects patients and providers, and taxation, which protects the financial and proprietary information of Nevada’s businesses.

SB 32 permitted the release of details regarding who applied for licenses, who received licenses, their ranking, score, and the process of issuing marijuana licenses. “This new policy is an important step in a multi-pronged approach to greater transparency in marijuana licensing under my administration. As our legal marijuana industry has evolved and flourished, it’s more important than ever that the industry and the public enjoy the benefits of a completely open and transparent process from licensing to operation so that our marijuana industry can become the gold standard in the nation,” explains Governor Steve Sisolak of SB 32.

In spite of SB 32’s passage, Wiegand of The+Source disagrees. “We do not believe that the application process lacked transparency, and we do not believe that it has impacted our reputation within the industry,” he says, asserting that “the DOT’s application process, by itself, caused no damage to the industry. If anything, it was the reaction to that process that may have caused damage, but we are confident that such damage, if any, will be mitigated as the market expands and matures in the State.”

“If anything, the litigation revealed how thorough the 2018 application process was and what areas the State will need to improve on for any future license application process,” says Bitten of whether any damage was done to the state’s cannabis industry.

Even though the trial did not offer a remedy for those who were not awarded recreational marijuana licenses, Bitten does not think it has created a division in the industry between the winners and losers. “There are a few unsuccessful applicants who I am sure are not happy with the result of the trial, but the majority of the industry is on the same page for moving forward with opening dispensaries with the licenses awarded in the 2018 application process,” he says, adding that a switch to a different regulatory agency, which began oversight of Nevada’s cannabis industry on July 1st, might be the golden touch. “With the creation of the Cannabis Compliance Board, the industry is confident the State will continue to improve on the work done by the DOT and to ensure that Nevada remains one of the leaders in the cannabis industry,” concludes Bitten. 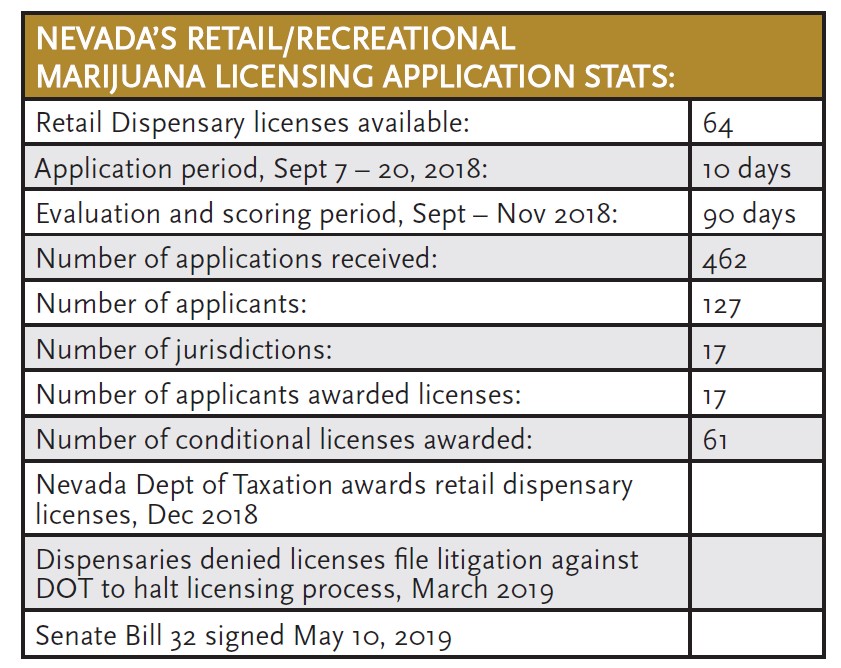