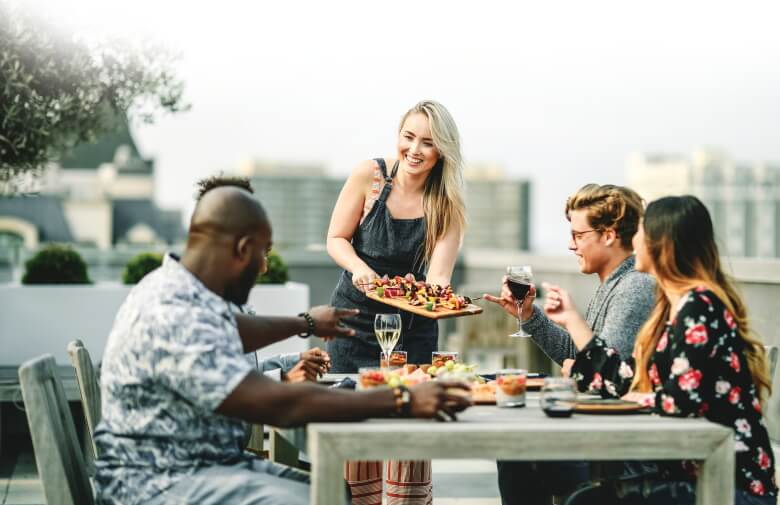 We must’ve looked like a modern-day version of Knights of the Round Table. Except armor, shields and swords were replaced with tattoos, piercings and hairstyles ranging from man-buns to purple-green highlights. When chefs go out to eat together, which is less often than you’d think, the tone is usually celebratory and includes a good dose of culinary critiquing.

Most of us prefer to eat at home after spending hours running around commercial kitchens cooking, sweating and cussing. It’s those rare occasions when schedules align and fatigue sits on the backburner that we make it happen. On this particular evening, we were celebrating the anticipated opening of a mutual friend’s café.

Digging forks into our individual dishes, not one veering from the restaurant’s standard preparation, a hush came over the table. Two bites into the meal and the comments and opinions began to trickle forth. After sharing notes and opinions the conversation circled back to the exciting details of our comrade’s café. Specifically, what would be on her menu? Chef Stella told us upscale comfort food is to be the theme.

“Comfort food? Don’t we all have a unique definition of what comfort food is?” asked chef Kyle. The table chatter paused as we considered his question. I asked if comfort food isn’t more closely related to a food memory. “Now that’s probably true, in most instances,” remarked chef Stella. “However, my comfort food isn’t connected to anything except making me feel better after a hard day of cooking for less-than-appreciative guests. Actually, my comfort food isn’t even that good for you.” When we asked what exactly this deficient sounding dish was, Stella replied her go-to dish when body and spirit need consoling is Kraft Mac ‘n Cheese.

“The stuff in the blue box? You eat that?!” asked chef Liam. Apparently, that’s exactly what Stella eats, when necessary. After kicking off work-boots, tossing her chef’s jacket and apron into the wash, she scampers to the kitchen and sets a saucepot of water on the stove to boil. Watching the rolls and waves of water excitedly move about she pours in the dry, hardened elbow macaroni. Once the pasta has softened, chef rips open the small envelope of orange powder and adds it to the pot along with some half and half. Snuggling on the couch, she turns on Netflix and digs in.

Stella assures us almost immediately after the familiar red and black logo fades, so does her stress. “It’s magical,” says Stella dreamily. “I’m telling you, there’s something about spooning that astronaut-like food straight from a serving bowl into my mouth, feeling the smooth silky pasta slide down my throat; I tell you, it’s heartwarming.”

“Any additions?” I inquired. Everyone at the table knows I’m referring to cannabis.

“Well my comfort food is just as heartwarming and it’s actually good for you,” declared chef Kyle.

“I presume you’re alone when you open the jar,” teased Stella.

In response to the wrinkled noses and furrowed brows displayed on our faces, Kyle attempted to change the perception his “comfort dish” as less smelly, fermented concoction and more soothing taste of home. After a long day of feeling harassed and harangued, Kyle sets up his rice cooker then fills it with ingredients needed to make his mom’s sticky rice. Kyle is a patient and meticulous chef. Rarely does he take shortcuts with the exception of his beloved rice cooker. So, it comes as no surprise to us, trying day or not, he stills employs his high standards of cooking.

With large spoon in hand, chef stirs a whirlpool of water in a pot of simmering water. With his other hand, he breaks two large eggs onto two saucers. Then ever so gently, slides them into the pot of swirling water, wrapping the strands of egg whites around the yolks. Kyle told us the image of the whites wrapping their translucent tendrils around the yolks conjures up memories of his mother tenderly hugging him when he was a boy.

Finally, it’s time to unleash his aromatic powerhouse, the jar of Kimchi. His preference is the hot and spicy version. Chef closes his eyes while telling us he always takes a couple pieces from the jar. Sampling this ancient condiment is like another food-hug. When his trifecta of ingredients is done, he scoops several ladlefuls of rice into the biggest bowl he can find.

“Whenever I prepare that dish, I feel homesick, but Kimchi on rice always comforts me.”

This time it’s Stella who asks about cannabis additions. “Of course,” replies Kyle. “Mom uses water to cook her rice, I use infused vegetable broth. Much tastier and certainly more medicinal.”

“Gosh, chef, my comfort food isn’t nearly that good for you or well prepared, but it does the trick of bringing me back from the brink every time,” states chef Liam.

Liam is a talented pastry chef, who has ventured into the realm of savory without missing a beat. With his knack of balancing flavors and textures, he artistically brings ingredients together in such a way that pleases the eyes and the palates of anyone fortunate enough to hire him as their personal chef. So, we are all stunned to hear him say his comfort dish is not well prepared.

“Olive Garden,” he replies sheepishly. A simultaneous groan makes its way around the table.

“You mean you don’t even cook your own comfort food? You go to a restaurant?” accuses Kyle.

“Don’t be silly, I’d never go inside! I order by phone and park in the designated pickup area. I wear a cap, sunglasses and scrunch down, so I’m unrecognizable.”

For Liam, there’s something about the huge mix of salad, the soft, warm, salty breadsticks and heavy pasta that serves as a kind of chicken soup for his soul on those long, hard days. Apparently, pasta drenched in sauce is like a thunder blanket for him. Unlike the rest of us, he’s not the least bit bothered by all that iceberg lettuce, canned olives and overly tangy dressing. No, Liam says, there are days when “only the Garden will do.”

Liam’s confession makes it easier on me when all eyes turn my way. “Soooo,” says Kyle looking at me, “What’s your food remedy, chef?”

While Liam’s declaration was met with a round of groans, mine elicited comments ranging from, “Are you kidding?!” to “OMG!” I was momentarily saved when our server, returned to the table with yet another bottle of wine, chiming in that on any given day, he has leftovers of Roberto’s Tacos in his fridge. As backup are boxes of Pizza Bites in the freezer. He swore, though the cuisines differed, the outcome was the same; comforting. After leaving the table all eyes were back on me.

“Well, my yen for KFC is connected to a food memory,” I offer in defense. “A rather nice memory at that. One that includes several members of my extended family, back when we were all still speaking to one another.” After announcing my low-rung on the ladder of comfort food, it was clear I needed to share the backstory of my love for that greasy fowl, those whipped to a frenzy freeze-dried potatoes, too-smooth gravy, mushy corn and airy biscuits.

My secret obsession came about the first year Dad purchased bushels of apricots from the orchards that once dotted what is now Silicon Valley. Regardless of age or physical ability, every available family member was corralled into cleaning, slicing and pitting those burnt-orange relatives to the peach. Once that laborious task was complete, we arranged the fruit in single layers onto several long, wide, wooden slats. Dad then covered them with screening to keep bugs and debris at bay. Dad was ahead of his time, by opting out of using sulfur dioxide to prevent browning. He liked the au naturel appeal of solar-dried fruit. After all the slats were secured, he’d step back, leaving the rest up to Brother Sun.

By that final day, every grandparent, auntie, uncle and cousin who had been roped into helping was exhausted. I remember feeling so tired I stood crying about the fleet of flies and bees drawn to my dirty, sticky clothing. Still, like everyone else, I felt a sense of pride surveying the rows of flying carpet-like wooden racks strewn across our back yard.

While the rest of us took turns using the hose to wash up, Dad handed a few dollars to the uncles for a food run. Nana cracked open beers for the grownups while Auntie Barbara poured pop for us kids.

The aroma of the food precipitated the uncles' reappearance in the back yard. I’m sure it was due to our fatigue and hunger that caused each of us to yum and drool over our plates. How something can be dripping with grease yet be so tasty at the same time, I’ll never know.

Scattered about in folding chairs, on wooden benches or sitting cross-legged on the patio, we were a living testament to the television ads, as we unabashedly licked our fingers. KFC became my family’s traditional closing to those ‘cot drying weekends.’

“That’s quite a food confession, chef,” remarked Kyle. “Obviously you weren’t adding anything back then, but do you now?”

“Of course, experiencing a canna-crisis day requires it! I’m not sure ‘The Colonel’ is using all 11 of his famous herbs and spices these days so I add a few pinches of keif right to the chicken and gravy, then spread my own canna-butter on the biscuits.”

Promises not to divulge our canna-comfort food secrets were made. Our Knights of the Round Table understood that what was said at the table would stay at the table.

In large mixing bowl combine flours and salt. In separate bowl whisk together eggs and oil. Make a well in center of flours and gently pour in egg mixture by using your fingers to blend flour a little at a time, from the sides – working outward. When dough is well mixed, turn it out onto a floured surface and knead until it is no longer sticky, but is smooth and elastic. Shape into a disc, cover with plastic wrap and allow to rest for at least 20 minutes.

When ready, roll out dough using a pasta machine and cut into desired pasta shape. Cook for 1 to 3 minutes in salted, boiling water. Drain.

½ pound each of grated cheddar and pepper jack cheese

In large pot, melt butter and sprinkle in flour. Cook over medium heat, whisking constantly for about 5 minutes, cooking starch from flour (you’re making a roux). Slowly whisk in milk and mustard, cooking until mixture thickens – reduce heat to low.

Beat egg in a small bowl, then add to sauce. Add grated cheeses, a handful at a time, stirring to melt. Season cheese sauce to taste and gently combine with cooked pasta.

A Fork in the Road

When the signs serendipitously lead ...