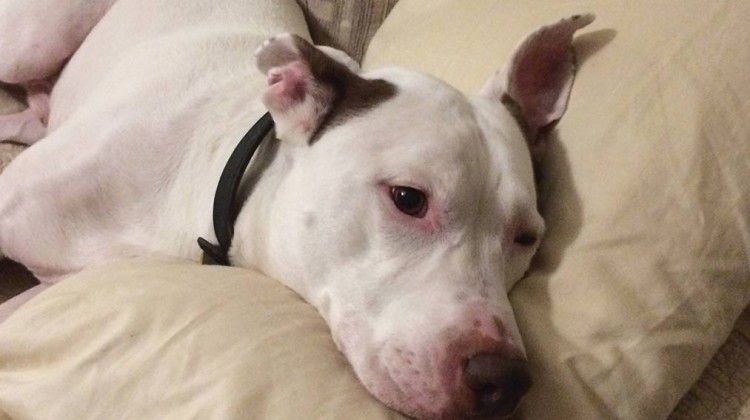 There is a reason we refer to dogs as man’s best friend. Or in Carrie Wilson’s (she prefers not to use her real name) case: mama’s boy. Dogs are loyal, caring, and playful and, at the end of the day, they are family.

Tonka Wilson, 7, has never given her mom a reason to worry, aside from the occasional potty accidents in the house and torn up shoes left hidden under couches and beds. That is, until late in December 2015 when the beautiful Labrador-Pitbull mix had diarrhea and started vomiting.

“Sometimes dogs eat stuff they aren’t supposed to,” says Wilson about the week that Tonka’s medical mystery began. “But by the end of the first week in January, I started to get really concerned.”

Tonka’s vomiting episodes would happen up to 17 times in a row. He was puking more out than he was taking in, according to Wilson. “He wasn’t eating at all. He just stopped.”

Wilson rushed her brown-eyed furry child to the vet, where Tonka was admitted for two days and put on IV drips before being sent home. This vet visit was the stressful precursor to a month of visits to vets, specialty vets and a battery of tests.

By the end of January, Wilson could see Tonka’s backbones and hip bones protruding. The once energetic and infinitely-hungry dog was down 25 lbs., malnourished, and hooked to a feeding tube.

After seeing more than five vets and undergoing exploratory surgery, Wilson was no closer to finding the cause of Tonka’s symptoms.

Tonka even spent a week at a specialty center. “At this point, our main concern was stabilizing him,” says Wilson. But after each visit, Wilson and Tonka were sent home with no answers. Identical to the days following Tonka's return home from previous vet stays, he still could not keep food down.

Still in the dark about Tonka’s condition, Wilson began doing what most mothers would do in this situation: blame themselves. “You start to second guess what you fed him that week. Was it my fault?”

Nothing was working. “We were just shooting blind. All this money was spent and we still had no idea what was happening to our Tonka.”

Wilson decided that enough was enough. “No more biopsies, scopes, x-rays or ultrasounds,” explains a frustrated Wilson. Despite her skepticism, she reached out to Lance Parvin, who is known for his expertise in Herbal Psychopharmacology.

Parvin introduced Wilson and Tonka to CBD oil. Within two days of trying the oil on Tonka, Wilson noticed he was regaining his appetite. Wilson said the change was night and day.

“I was skeptical about it working,” explains Wilson, who has a background in biology, “but if we hadn’t tried the CBD oil, I don’t think Tonka would be here today.”

The treatment is both easy and effective. Tonka gets 0.1 ml of CBD oil rubbed onto his gums every night before he eats.

Tonka’s recovery has been slow. But according to Wilson, after a month of CBD oil treatment, he’s back to eating two cups of food, sleeping again, and his energy has returned.

“We spent over $7,000 in treatments and tests,” says Wilson. “All this time the cure was so simple. I’m a believer now!”