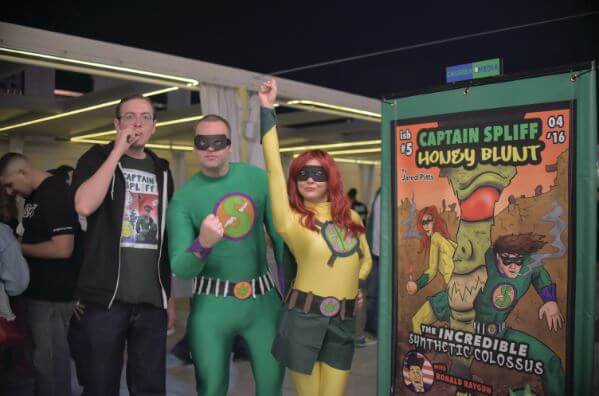 The superhero genre of entertainment media has grown into a dominant part of modern popular culture. From its humble roots stemming from Jerry Siegel and Joe Shuster’s 1938 story of an alien from planet Krypton to Stan Lee’s story of a superpowered ultra-patriot who later becomes frozen, the fiction of superheroes has expanded exponentially. From TV series across multiple platforms to an endless barrage of billion-dollar films to massive conventions, fans are inundated with ways to immerse themselves in the vast pop culture of comic book superheroes.

Yet through it all, cannabis and its usage doesn’t appear to be a consistent subject in superhero comic books, at least not nearly as common as a much-loved hero suffering from alcoholism or another addiction. There’s a handful of small cult-following publications and brief references to cannabis, yet none use the controversial history of cannabis and its supporters and enemies quite like writer/illustrator Jared Pitts, 35, who by day is Cultivation Cycle Control Manager at local grow State Flower Cannabis and by night is the creator of Captain Spliff Comix.

Since childhood the Albuquerque, New Mexico native always had a fascination and a deep interest in newspaper comics and animated series “The Simpsons,” acknowledging that his dream career as a child was to be a newspaper comic cartoonist.

While studying Visual Communication at Seattle’s Northwest College of Art & Design, Pitts created a one-off painting, which was lauded by his peers. Planting the seeds a full decade ago for Captain Spliff and the potential of a cannabis superhero and his sidekicks who battle the evils of cannabis prohibition while providing sharp satire on drug culture, the artwork would eventually become the cover of the inaugural issue of Captain Spliff: Meet the Dank Knight.

In 2008, Pitts decided to explore the idea of a cannabis superhero further and focus his senior thesis on the history of cannabis and its uses. During his extensive thesis research, Pitts gained a uniquely artistic perspective into the xenophobic and racist past of cannabis. “That’s what really started turning the wheels. I began to think that this character, Captain Spliff, could be a megaphone and a conduit for all these things that I’m learning that I’d like to communicate and convey to people,” explains Pitts. Aspiring to have the character stand as a symbol for advocacy and spread cannabis knowledge and culture in the same vein as legendary activist/author Jack Herer, Pitts wanted to create a series that was “fun, informative, colorful but also educational and a series that preaches the gospel of cannabis and its history and benefits.”

Starting with the first issue released in 2009, Pitts has used his perma-baked superhero affectionately nicknamed The Dank Knight or The Dank Crusader to fight against an array of supervillains in the city of Lidsville, each portraying a different notorious prohibitionist across the decades. Numerous infamous figures from cannabis’ historical backstory are portrayed including the only American president ever to resign who indirectly designated “gate” to be a suffix of anything scandalous, and Federal Bureau of Narcotics Commissioner Harry Anslinger, the founder of the War on Drugs and pioneer of reefer madness-turned-mass incarceration.

Pitts has utilized his artform to become a stoner’s Alan Moore, an English writer known primarily for his work in comic books including Watchmen, V for Vendetta, The Ballad of Halo Jones, Swamp Thing, Batman: The Killing Joke, and From Hell. Pitts portrays historically dangerous policymakers Nixon and Anslinger as villains in his tales. “They’re demons from hell,” Pitts explains, “they’re not even human. They’re horrible, evil and malignant spirits that come and go through this vortex so I’m not sure he (Spliff) could ever kill them because their legacy is so horrid and tarnished that it leaves a permanent stain.”

Pitts weaves the heroic exploits of Captain Spliff into stories that chronicle U.S. drug laws as they are passed and enforced over the decades. In later issues he focuses on 1980’s drug culture and its enforcement during President Reagan’s expansion of the War on Drugs. Pitts uses the over-the-top archetype of comic book villains to his satirical advantage, casting super villains with names that satirize dangerous substances that includes Captain Crank to parody crystal meth and Synthetic Colossus to parody K2 and spice.

As many creative writers traditionally do, Pitts based his canna-hero a bit on himself. One example is using Captain Spliff’s mask as a prescription in the same way that Pitts wears prescription glasses. Without his mask, Spliff is almost blind, similar to his creator.

However, because he is a superhero, Spliff also has some talents Pitts does not possess. Speaking very humbly, Pitts admits that his joint/blunt rolling skills aren’t his strong suit quite in the same way he is able to cultivate quality cannabis. As for his alter-ego creation, the charismatic and well-spoken Spliff can roll masterfully. And because the medium of comic books is always fantastical, Pitts provided Spliff some interesting superpowers. “He’s got sticky fingers so he can climb walls and he’s got “everflame.” Whenever he flicks his thumb, he always has a flame available,” offers Pitts. Even with the powers that Captain Spliff is granted, he has his own personal Kryptonite and it’s the scary world of sobriety. In a very Popeye and spinach-like cause and effect, Spliff’s power are activated by cannabis, meaning our hero must remain perma-stoned for his powers to stay active, often sneaking off to smoke a blunt at the comedic misfortune of those he needs to save.

As for Captain Spliff’s trusty sidekick Honey Blunt, her weakness is one that a majority of us possess. If Blunt becomes “hangry,” a medically fictional condition where one becomes significantly more irritable or angry when hungry, her powers are useless. Therefore, in classic stoner fashion, she possesses the power to generate snacks in one form or another upon request.

Given its mix of comedy, history, superheroes and cannabis, the reception from the cannabis community has been positive. “People love the series,” says Pitts. “I’ve met people who’ve never read a book in their lives but read an issue of Captain Spliff cover to cover. They’re enthralled by it because it speaks to them. It speaks to something they’re passionate about and they learn about something that they’re passionate about.

“One of my main slogans is: Learn it, Don’t Just Burn It,” continues Pitts. “We all love smoking weed and getting stoned but there’s so much more to it than just getting stoned. It’s an amazing medicine, it can replace food sources, it can produce fuel, building materials, everything. So, I think it (Captain Spliff) sparks peoples’ imaginations and their curiosity about this product that they use every day that they might not think much about outside a product that’s used recreationally. I just wanted to open their eyes to cannabis’ full potential and the way this can fundamentally transform society.”

As for the future of the satirical series and subjects and figures that it may parody, Pitts hasn’t set a definitive path. While the socially evil acts committed by Anslinger, President Nixon, William Randolph Hearst and President Reagan during the War on Drugs should be documented, the modern-day cannabis industry and its current anti-legalization politicians provide more than enough material.

“I feel like I’m torn between two worlds,” says Pitts. “I want to represent the past and teach the history, but there’s so much going on now and so many current events that could be satirized.” The corporate “big cannabis” entities that come in and alter the operations and products of smaller cultivations could potentially be villainous subjects and today’s cannabis advocates could be showcased as heroes.

However, the satire of today’s political climate, an issue that Pitts faces, is the impermanence of certain figures of power and deciding if they deserve a parody. Case in point, former U.S. Attorney General Jefferson Beauregard Sessions III was arguably supposed to be the biggest legislative enemy to cannabis when he was sworn into office in February 2017. Yet during his tenure of barely 18 months, Sessions didn’t do much beyond rescinding the Cole Memo to restrict cannabis access. “Someone even said I should do Jeff Sessions,” admits Pitts, “but honestly, I didn’t know if he was going to be around in a year or two. And surely enough, he was just a flash in the pan. If I were to put him in the comic, in a few years you’d say, ‘who the f*%$k is this guy?’”

As for upcoming storylines, the next issue is anticipated for an April 20, 2020 release and will utilize the team’s newest addition, an extract-loving superspy called Agent 710. Modeled after James Bond, the suit and sunglass-clad agent carries a blowtorch as a weapon. Yet, because he was only briefly introduced during the final panels of issue five, his superpowers remain a mystery.

Captain Spliff proves that although some form of legalization is a reality in over 30 states and counting, the lampooning parodies of cannabis culture are still just as relevant and hilarious as they were decades ago. With the next chapter of legalization on the horizon, the ideas for precisely what topic to satirize and, in turn, immortalize will be endless.