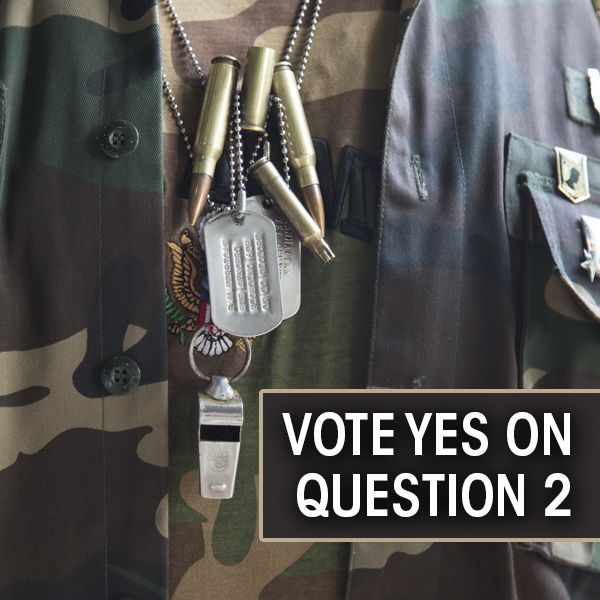 Military heroes return home only to fight war on drugs

Military heroes return home only to fight war on drugs

“In some cases it’s a matter of life or death,” says former U.S. Marine Corps Corporal Roberto Pickering of passing Question #2 to regulate marijuana like alcohol on November 8th. Although Pickering’s statement sounds dramatic, he is referring to the statistic that 22 veterans commit suicide each day as a result of PTSD.

“A lot of veterans are coming back from the war with battle scars and they are being prescribed opiates to deal with it to manage their pain but as they heal, the opioid addition doesn’t go away, instead they develop an addiction and then they are dying on the streets as heroin addicts,” Pickering described of the nation’s war heroes.

Pickering advocates voting yes on Question #2 this month because it would allow safe access of cannabis for his military brethren. “Anything that chips away at this disgusting number of 22 veterans killing themselves each day, which is actually far lower than the actual number, would be welcome. I think that it is going to save a lot of lives, I really do. Access is everything, and that’s where it starts,” he opined.

From the moment his VA doctor wrote him a prescription for the anti-psychotic Seroquel, Army veteran Boone Cutler lost complete control of his life. “It was at exactly that moment, it wasn’t in the war, it wasn’t when I got to Walter Reed, it wasn’t after I got blown up. It’s when I got that prescription of Seroquel and took it on top of Ambien, on top of chloral hydrate, on top of all these other things -- that was it, it was over for me. Why? Because that was the last time I had the ability to make decisions for myself.

“You are zombied out and because you are on all these drugs, guess what you never think about doing? Coming off all these drugs, because your day is spent managing them,” explained Cutler, who has a tattoo emblazoned across his right forearm that appropriately reads ‘take the pain’. “I don’t know who decided to put me in charge of my own medication with a head injury, memory loss and short-term memory issues, but it probably wasn’t the best idea. “I would lie down and wouldn’t be able to sleep and would take an Ambien and chloral hydrate. I would lie back down, wake up, completely forget that I took the Ambien and chloral hydrate, and dose again. One night I took four Ambien over a period of about five hours and drank a half a bottle of chloral hydrate. The next day I got up, changed my will and left everything to my dog, Buster.”

Christoper Lengyel, 28, also started on the VA cocktail for PTSD shortly after leaving the Army following four years of service. “At first, I didn’t know what was going on. No one talked about it. I didn’t know what it was. No one offered the warning signs of what PTSD was or talked about it in a way as to look for warning signs. After a couple of incidents that brought the situation to light, they immediately started putting me on anti-depressants. I have had four extensive joint surgeries so I was also on different opiates, oxy, Percocet, Seroquel,” relayed Lengyel.

“You name any of the sleeping and anti-anxiety pills and I was on them. Close to the time I was getting out of the military, it got to the point where these pills were destroying my body and I had to get an endoscopy because I was throwing up blood. I had severe ulcers in my stomach, and my kidney and liver enzyme numbers

were not good. I was well on the way to damaging my liver and kidneys from processing all of these pills,” Lengyel explained.

Former Marine John Millken, who has had 17 surgeries on both of his feet resulting from an IED blast in Afghanistan in 2009, was on opiates for half a decade. “When I first got hit I was immediately put on opiates and I didn’t get off of them for 5/1-2 years -- not one day. As soon as I would start going down on the pain meds, they would do another surgery and they would go back up again. I was figuring what the doctors were giving me was good stuff but it just ended up not being that way.”

Like the other veterans profiled in this story, Millken, 29, decided to wean himself off opiates. Their stories are all very similar to Millken’s. “I live in pain every day. I still have pain in my right foot, but my main motivation for coming off the opioids was I realized how much it had changed me, I could literally feel it draining the life out of me where I was getting weaker, and weaker each year. I went cold turkey, it was probably the worse month-and-a-half of my life to be completely honest. After getting off of the pain meds, it took about two or three months to even out and for a month straight I was puking every morning. It’s like being a heroin junkie going through withdrawal. Once I got past that, I could literally just feel my mind getting clearer and clearer as I got further and further away from that point.”

FROM COCKTAILS TO CANNABIS

Pickering, 36, has been using cannabis medically for the last five years. It aided him in getting off the many pharmaceuticals he was taking as well as kicking alcohol. “It absolutely changed my life, I don’t drink alcohol anymore, I get a good night’s sleep, I am not aggressive, I am not angry. If you have the ability to get a good night’s rest and lower your anxiety levels, that’s pretty much a fix. It’s like giving a thirsty man a glass of water,” he noted of the cannabis tinctures and edibles he uses every night before bedtime.

Lengyel started with CBD-based cannabis and RSO-style (Rick Simpson Oil) products. “Within three or four weeks I was able to reduce my anxiety attacks, get better sleep, and the overall day-to-day grind of being in crowds was curbed by using cannabis,” offered Lengyel, who also prefers tinctures, edibles and vape pens in low THC strains varying from 12 to 18 percent. “I use different stuff depending on what conditions I am treating. When it gets humid outside, my joints kill me so I use a lot more CBD-based product. If I am having an acute anxiety attack, I prefer something more sativa-based. If I can’t get to sleep, I will medicate with an indica.”

Cutler’s first experience with cannabis was also life changing. “I smoked the weed and I went to sleep. I slept,” he enthused passionately. “That may not be amazing for a lot of people, but if you haven’t slept in five years, it’s amazing. Because what I had to do before that was use all those drugs, plus half a bottle of NyQuil and a good amount of Scotch. That’s the way I lived, that’s the way a lot of us lived. That’s the way a lot of us are living right now who aren’t in this room and they are going to die.”

THE CONSEQUENCES OF CANNABIS

Even though cannabis gives veterans their lives back, there are myriad reasons why they can’t or won’t use it. More often than not it’s concern over losing their VA benefits. Although medical marijuana is legal in 25 states, it’s still federally illegal and so veterans fear becoming part of a state’s medical marijuana registry.

“I think passing Question #2 to get veterans safe access is extremely important because they are going to be able to walk into a dispensary without a medical card and get lab tested medicine. Adult-use would end them having to pay for the fees to keep up with a medical card and it would stop them from buying cannabis on the streets.” Pickering continued, “In some cases they are losing their benefits. They are tied directly to the medications that the VA is prescribing. In order to get their disability pay, they take their medication because their families’ income is reliant on their disability pay.”

Cutler offered another reason why veterans don’t want to register in Nevada’s medical marijuana program. “They are afraid to lose their gun rights because if you have a medical marijuana card they are taking away guys’ CCW permits. War fighters don’t like to lose their guns, it’s not going to happen. But if I am on Ambien, and Seroquel and all this other stuff I can stumble right in and say, ‘give me that AR (assault rifle)’ but if I get high at night to go sleep that’s a problem.”

MAKING A CASE FOR CANNABIS

When it comes to quality of life, the veterans elevate interviewed for this story don’t see a downside to cannabis.

“When you see a vet who is using it and for the first time since he has been at war he or she can sleep through the night without having a panic attack from a nightmare, it’s hard to look past that,” emphasized Lengyel. “I am going to keep driving this point home until someone understands the positive benefits of this far outweigh any negative repercussions. States with medical marijuana in place saw a 20 percent reduction in opiate use within the first year.

“With the amount of veterans committing suicide or dying from overdoses and the fact that cannabis has the potential to alleviate a lot of those factors, it’s a shame that the government doesn’t do anything. The lack of research or refraining from doing research in any field in the U.S., or the world for that matter, is just a form of complete ignorance and a huge disrespect to the scientific community.”

But all the veterans included in this story do agree on one thing, cannabis has altered their existence for the better. “It really has changed my life. I don’t think medical marijuana is a miracle cure by any means, but when you stop smoking medical marijuana you aren’t sick for a month-and-a-half straight. If you have to go a day or two without it, it’s not going to kill you like that stuff does,” offered Millken.

“I think cannabis saved my life,” concluded Pickering. “That’s one more that might have gone on the tally.”