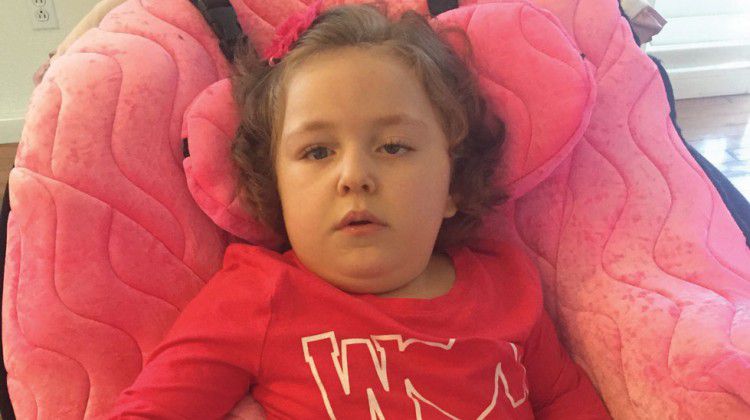 A droopy eyelid. That was the first sign that something was wrong with Kristin and Toby Bowker’s three-week-old baby, Bella. “The pediatrician thought it was normal newborn stuff,” explained Kristin. “They found missing tissue in her eyes and told us she would have no vision or low vision. We had genetic testing right afterward and it came back fine and they concluded the eyes were an isolated event.”

It wasn’t. At two months old, Bella started having seizures. It took about a month before Bella’s doctors offered a diagnosis of Aicardi Syndrome, which is a rare genetic malformation syndrome characterized by the partial or complete absence of a key structure in the brain called the corpus callosum, the presence of retinal abnormalities, and seizures in the form of infantile spasms.

From that point, the Bowkers began a crash course of learning which pharmaceuticals would be best for treating Bella’s condition – from Sabril to ACTH. Then they had to make a decision about whether or not to put their infant on a ketogenic diet, which is a strict low-carb diet, similar to the Atkins diet or LCHF (low carb, high fat).

“We saw an initial decrease in her seizures in the beginning but she still had seizures every one or two hours,” said Kristin, noting they went on to try approximately six seizure medications.

The Bowkers had never considered cannabis until Bella’s vision therapist mentioned Dr. Sanjay Gupta’s CNN “Weed” documentary during an in-home visit. “As soon as she left, I watched the show. After seeing that, we had to research and figure out if it would work for our daughter,” explained Kristin.

In addition to finding solid research, for the couple to feel comfortable giving their toddler medicinal cannabis, the Bowkers turned to their faith. “God has used a plant he created to do incredible things,” explained Toby Bowker of cannabis. “The research shows that we all have an endocannabinoid system in our bodies that God created for a medicine,” Kristin continued. “So knowing that, for me, it was a very easy decision. The endocannabinoid system helps boost the immune system in our bodies, alleviates pain, and helps to cure us where pharmaceuticals are not always effective.”

Even though the Bowkers lived in Nevada where medical cannabis has been legal since 2000, the medical dispensaries weren’t open when they began their search for medical cannabis for Bella. “They were still a year to year-and-a-half out from opening,” recalled Kristin. “So our options were to grow it ourselves because there was no CBD oil in Nevada, get it from California’s dispensaries and bring it back, or move to California to get access to it. But when we started looking into going back and forth we realized we couldn’t be drug traffickers.”

The couple decided moving to California to access cannabis legally was their best option. That obstacle overcome, the Bowkers still had to maneuver through an industry that didn’t understand the value of CBD cannabis oil quite yet. “We definitely had our challenges finding legitimate CBD oil,” said Kristin, who would take every bottle they purchased to Oakland for testing since at the time California didn’t require cultivators to lab test their cannabis. “Three years ago dispensaries would say it was high CBD oil but it would be half the milligrams they said it was or there were only residual amounts – it was all across the board,” offered Kristin.

Once they found oil with the correct strength, the next hurtle was getting the dose right. “Our doctor held our hand each step of the way and told us about possible interactions when we started her on CBD. We instantly started weaning the pharmaceuticals. Then we started seeing a weird interaction so we were dealing with that,” said Kristin. “In the beginning, it was this weird balancing act, juggling the pharmaceuticals and CBD and watching her for response. Then we added in THC-A and then a little THC because we weren’t seeing enough progress.”

But the challenges they encountered were worth it because the Bowkers saw a 75 percent decrease in Bella’s seizures, noting that with Aicardi syndrome it would be rare for her to be completely seizure-free. “For the first time, she slept through the night,” Kristin enthused of the results they saw from cannabis, adding, “She was three years old before she slept through the night and she’s come down from five mediations to just Sabril and Keppra.”

Three times a day Bella receives 100 milligrams of CBD through her g-tube. The cost for her CBD oil is $1300 a month but to the Bowkers every drop is worth it.

“She will respond to us with sounds or with her eyes now,” Kristin said of Bella who will be six years old in June and has taken cannabis oil for three years. “Bella is awake and alert like she has never been before.”