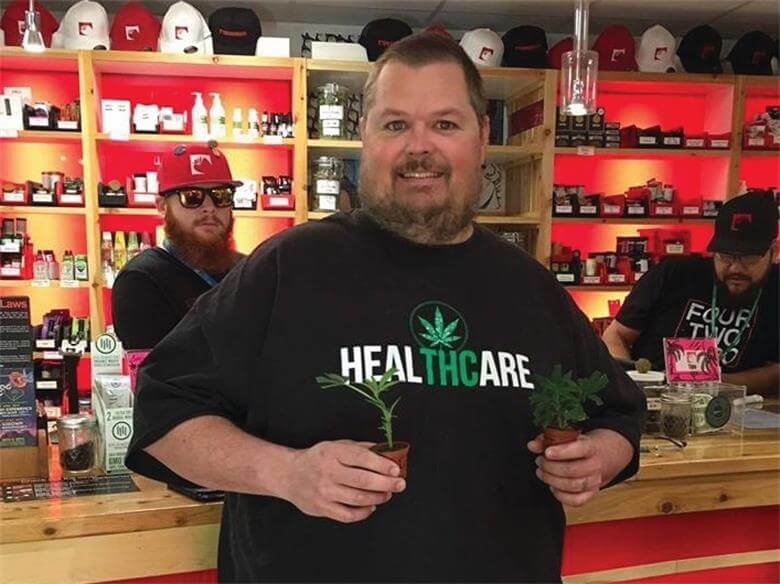 works toward a normal life with the help of cannabis

works toward a normal life with the help of cannabis

“Cannabis has enabled me to unlock normalcy, which is important because I just want to be normal again,” explains Peter Loughead, 42, who was diagnosed with multiple sclerosis (MS) in February 2012. “I have been able to restore a large portion of that normalcy to my life. There have been many times where depending on what’s going on with my body and it doesn’t want to work or I am trapped in bed, things can really take a different turn. In 2012 after I got diagnosed there were some serious thoughts about whether I wanted to continue on this journey.”

Not only did Loughead decide to continue the journey, he decided to forge his own path which has included Las Vegas. When he was diagnosed with MS, Loughead lived in Texas and was a fulltime student working toward his doctorate in psychology. He realized upon diagnosis that his life would never be the same. “The reality was I was never going to be able to open a practice. It’s too much stress. Even school was a lot of stress which exacerbates MS and can cause flareups,” explains Loughead, who ultimately did not finish his degree.

Instead he chose to follow his ex-wife, her new husband, and children to Missouri where they had recently relocated so he could be close to his kids. “Once I got there my health started deteriorating. When I got out of the hospital I went from being bedbound to being in a wheelchair and by the time I left I was using both a walker and a cane. I started regressing once in Missouri. The winters were really hard on me,” he relays.

However, it was in Missouri that Loughead discovered cannabis despite the state not having any legal marijuana legislation in place. “I was really hesitant at first,” Loughead recalls, who is a former police officer, “I’m not a big cannabis fan, I never was. I didn’t like the smell, and I still think it smells like a skunk peed in a tent.”

But Loughead’s alternative was traditional pain medications of which he wasn’t a fan either. “With the kind of conditions I have with neuropathy, I could get pain medications if I wanted them. I could get anything I want from my doctor. I took them and I didn’t like them. I knew the dirty side to them from my law enforcement career. I really didn’t even want to try them when they gave them to me in the hospital. But there they were, and you could have them and have as much as you wanted,” recalls Loughead. “They do get rid of the pain, they make everything numb but you are sleeping 17 or 18 hours a day. You are a zombie, you are irritable, you don’t want to be around people, and that’s not a quality of life.”

Loughead’s dislike for opioids led him to start looking at other options. As for trying cannabis, “there was no real catalyst, there was not an a-ha moment. It was more like the straw that broke the camel’s back. I started with flower that was all black-market stuff and when I found it, wow, what a big difference,” he relays.

It was during a trip to Colorado in April 2017 that Loughead realized how valuable cannabis could be if it was a quality product and not something from the black market. He visited a Denver dispensary and bought some sativa edibles and within 15 minutes of eating them he noticed a difference. “I was having a hard time with the cold, my hands were balled up and drawn close to my chest and my legs were bouncing with muscle tremors similar to Parkinson’s then I ate the gummies and could actually use my left hand and my legs weren’t bouncing,” recalls Loughead. “That’s the first time I ever noticed that it actually worked more than it just made me feel better. That was the first time I saw it shut down that activity in my body.”

It was a defining moment for Loughead who didn’t want to leave Missouri and his children so he became an activist, starting a petition to make medical marijuana legal in the Show-Me state. He worked with other activists to get a constitutional amendment on the Missouri ballot in 2016. This effort would require 167,000 signatures, and they got 260,000. “We figured 100,000 extra was a good safety net because we knew we were swimming uphill,” explains Loughead. “But 12 of the district attorneys from the state of Missouri took us to court to challenge the validity of our signatures. And those 12 DAs and one judge decided the fate of Missouri and they decided we were 23 signatures short because they disqualified those 23 for certain reasons.

“And that was it. We couldn’t get it on the ballot. That was when I had to go home with my tail between my legs and I knew that everything I was fighting for was over. But I didn’t have time to wait until 2018 for us to try again. I was fearful every day that my wife was going to get fired, that we were going to lose our house, I would be cut off from my kids. There were just too many variables.”

Instead Loughead decided to see what life would be like without cannabis. “I went off it for six months and I was almost bedbound again and that’s when my wife and I decided we are out of here because I am going to die trying to fight this here in Missouri and that’s not something we were willing to do,” he explains. “I had to flee, and I don’t like the fact that I had to run and hide. I am an upstanding citizen, I was a doctoral student, why the hell am I in hiding? If wanted to get blasted on opiates, I could do that. If I wanted to be drunk every day on Jim Beam, I could do that. It’s a sad state of affairs.”

Loughead and his wife reviewed their options and decided they needed to move to a state with legal marijuana and Las Vegas was their best choice. “The cannabis market in Nevada is not as good for a patient as Colorado by far, but on the flipside the weather affects me when it snows. And I knew being a tourist town, Las Vegas was going to be handicap accessible. Missouri was not handicap accessible. I weighed out a lot of the different things and Vegas won, I am here. The quality of life is much better, my wife and I are much happier.”

Since moving to Las Vegas last August and getting access to medical-grade cannabis, Loughead has seen a marked improvement in his condition. “A year and a half ago I was on home healthcare, I couldn’t even go to my doctor’s office, my physical therapist had to come to my house. Less than a year later, I have lost 40 lbs., dropped three prescription drugs, I’m walking again, standing, cooking,” says Loughead. “I have actually been able to get out of my chair with the regular use of cannabis. I now walk around my house. It’s night and day. Yesterday my physical therapist was talking to me about my goals. He asked if I want to be able to go to the store without my walker. I hadn’t even thought that far ahead.”

Loughead has experimented with many forms of cannabis to find what works best for him since moving to Las Vegas last summer. “I started using different strains of flower to see what I could get the most effect out of. It’s an expensive and lengthy process and nobody can give you the answer. It’s trial and error,” he explains. “I tried a whole slew of flowers and found indica helps me relax and stops muscle tremors and sativa helps me stay focused.”

In his trial and error, Loughead has found that edibles work best for him. “We found a coconut oil and we were able to make cookies. Once I did that the edibles made a night-and-day difference. I wasn’t having to smoke constantly so my throat wasn’t sore and they last so much longer. It’s the difference between eating a multi-vitamin and eating an orange. My body just felt so different. I regained functionality, I wasn’t so drowsy. I didn’t have the haziness from the psychoactives. I wasn’t high so then I could be more normal.”

When the coconut oil he had been using was discontinued, Loughead started making his own from cannabis concentrate. “Since I have been making my own edibles with concentrates I have regained even more function from my hands and feet. I can actually put my feet flat on the floor now and before I could never put my heel all the way down, almost like I was walking around in high heels. I have recently been able to type with both hands and I haven’t used two hands to type since I stopped going to school. That was an a-ha moment.”

Of which Loughead has had many. “In a normal situation, if I go without marijuana for an hour my arm will start to draw up. If we are out for three or four hours and I don’t have a cookie or my vaporizer with me, my leg will start to bounce, I might start to stutter a little bit. Then I eat a cookie and in 20 minutes I am fine,” says Loughead, who adds, “My goal is to recapture normal. You can’t put a price on normalcy.”