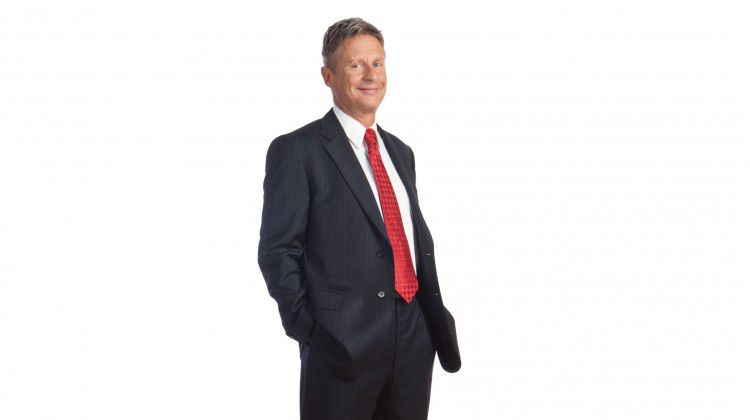 NOT YOUR AVERAGE JOHNSON

NOT YOUR AVERAGE JOHNSON

More than just a one-issue politician, Libertarian presidential candidate takes on immigration, the economy and education

More than just a one-issue politician, Libertarian presidential candidate takes on immigration, the economy and education

On the campaign trail, many pundits assess a candidate’s likability by pondering if they’re the type of person with whom you could grab a beer. However, as more states across America move toward cannabis legalization, perhaps a new gauge for relatability could lie in a presidential hopeful’s willingness to light up with constituents.

As Question 2 in Nevada proposes fully legalizing recreational marijuana, only one candidate on the ballot in the Silver State has firsthand experience with cannabis and the desire to take the cause nationwide: The Libertarian party’s nominee Gary Johnson. (Green party candidate Jill Stein does not have ballot access in Nevada and write-ins are not allowed.)

The former GOP governor of New Mexico from 1995 to 2003, Johnson was cool, calm and collected before his packed Las Vegas rally at the Foundry in the SLS on August 18. Flanked by his running mate, former Republican Governor Bill Weld of Massachusetts, the #TeamGov duo met with elevate to share why Nevadans should consider them for president and vice president this November.

Personal freedom and liberty are cornerstones of Gary Johnson’s platform. Though he is abstaining from cannabis use while on the campaign trail and would if he were to be elected, it is at the forefront of policies he’d reform immediately if he were to win. “It is a pledge on both of our parts to deschedule marijuana the first day in office,” Johnson says of himself and Weld

“We need to legalize marijuana in the United States,” he reiterates during his Las Vegas rally. “We have the highest incarceration rate of any country in the world, and I refuse to believe we are any less law-abiding in this country than any other country. It has to do with the war on drugs. There are tens of millions of Americans that are convicted felons in this country that, but for our drug laws, would otherwise be tax-paying, law-abiding citizens.”

Though mainstream media rarely gives coverage to Johnson, internet-savvy millennials have found their way to supporting his campaign. In August a national poll by Investor’s Business Daily found Johnson ahead of both Democratic nominee Hillary Clinton and Republican nominee Donald Trump with 35 percent support in the 18-24 age bracket. But it’s the overall national poll requirement of 15 percent that Johnson needs to reach to make it onto the debate stage that is still up in the air (as of press time).

Johnson and Weld aren’t strictly running as pro-cannabis candidates. Immigration is another hot topic as a result of the county’s robust Hispanic population at 27 percent, or 14th in the nation according to the Pew Hispanic Center. Regarding that hot-topic wall on the Mexico border the Republican candidate wants? “We should not build a wall across the border,” Johnson says. “We build a wall across the border, the president of Mexico is going to stand on the opposite side of that wall and say, ‘President of the United States, take that wall down!’”

He continues, “We embrace immigration. We think immigration for this country is really a good thing. We’re a country of immigrants and we should make it easy as possible for someone that wants to come into this country and work, to be able to get a work visa. We’re not the deporters here. We don’t want to break up families and the dreamers.” Adds Weld, “We want the dreamers to be able to go to college. We’re on their side.”

Speaking of education, Nevada recently had the unfortunate distinction of being named the worst in the country based on ACT scores, with only about 10 percent of students being college-ready. Johnson is a proponent of school choice and letting Nevada make the decisions for its schools.

As far as those with college aspirations, Team Gov has an approach as well. “I think the highly-expensive, four-year, Ivy-clad bricks-and-mortar education may be a thing of the past before too long,” says Weld. “I think online education is a way to reach a lot of people who can’t afford to take six months or two years off to go to get their associate’s degree, so I think government support of online education would be good, government-supported partnerships between colleges and employers... There are other partnerships with universities where the government will sponsor your kids and have no student debt if they agree to work in the public sector for three years. There are other things that can be done to just make sure jobs are available. Working your way through college used to be a very common proposition and there’s no shame in that either. It’s a multi-faceted approach.”

“I think it’s important to point out the reason for the student debt crisis,” adds Johnson. “The reason for the high cost of college tuition is government-guaranteed student loans. Government is interfering in the marketplace, there’s a skewed supply and demand because of guaranteed government student loans, but I think we’re both open to legislation that might cap interest rates. I think students have been sold a bill of goods and if we can bailout Wall Street, I think we can do something for students.”

Johnson looks toward the sharing economy as the way of the future, i.e. through companies like Airbnb or Uber and Lyft. “Eliminating the middle man, allowing for you to provide your goods, your services directly to the end user and the end user pays less money, you make more money, that’s the model of the future.” He adds, “Here in Las Vegas there has to be all sorts of opportunity to rent your place out to make some extra money.”

Money is definitely one area where Governors Johnson and Weld have a proven track record. “Neither of us serving full terms as governor, in each of our respective states, raised taxes one penny between us, not one penny,” says Johnson. “Count on us to support lower taxes, to support simplifying taxes.” Johnson promises that he and Weld would submit a balanced budget to Congress in the first 100 days. “If we don’t balance the budget, we’re not going to be a country going forward. Our kids, our grandkids, ourselves, we’re going to suffer the consequences of what is going to be runaway inflation to go along with the fact that we continue to print more money to pay for what it is that we’re doing.”

In an election year filled with drama, scandal, conspiracy theories, divisiveness, and dissatisfaction with two-party options, many are looking for a different option and as he says in his commercials: “Just Google ‘Gary Johnson’ and find out.”

As far as critics who caution voting for a third party candidate in a swing state like Nevada is essentially a vote for Clinton or Trump (depending on the leaning of the outlet) or just wasted altogether, Johnson presents an alternate point. “What I would say is a wasted vote is voting for somebody you don’t believe in,” he says. “Come election time, I think there’s going to be a lot of conjecture over, ‘Are you going to waste your vote on either Hillary or Trump?’” Adds Weld, “If you believe in us, don’t waste your vote elsewhere.”