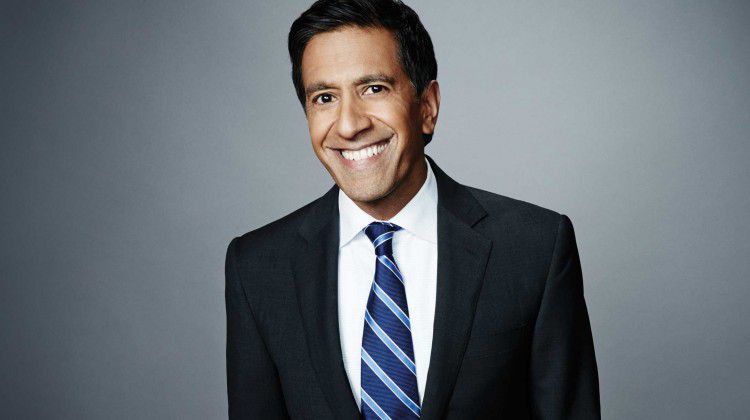 “I’m here to tell you, as a doctor, that despite all the talk about the medical benefits of marijuana, smoking the stuff is not going to do your health any good.”

Those are the words of Dr. Sanjay Gupta in a column he wrote for Time magazine eight years ago.

It seems hard to believe now as Dr. Gupta has become almost synonymous with cannabis as a result of his "Weed" documentary series on CNN (although he begs to differ about the synonymous part, but more on that later).

He was emphatic in the Time piece, surmising of those voting to legalize marijuana in 2009 in Nevada and Colorado that “many of them just want to get stoned legally. That’s why I, like many other doctors, am unimpressed with the proposed legislation, which would legalize marijuana irrespective of any medical condition.”

Three “Weed” documentaries later (2013, 2014 and 2015) and with a fourth on the way later this year, having clearly changed his stance, Dr. Gupta is, today, just as emphatic about the medicinal and healing value of cannabis.

“Not only can it be of benefit, but sometimes it can be the only thing that is of benefit as we saw with the very refractory epilepsy and, maybe, even some of these cases of neuropathic pain. That’s powerful, that’s really really powerful to me. And forget that I am doctor, it’s probably immoral to not allow people to have relief from something -- especially when they can’t find it in any of the existing modalities that are being prescribed to them. I think it probably borders on immoral, or maybe it just is immoral,” he concludes.

When the neurosurgeon reflects on his journey with cannabis from non-believer to someone who’s “goal is to keep this very important conversation going,” Dr. Gupta is disconcerted by the idea that initially he didn’t take cannabis seriously as a medicine.

“The idea that the substance could be a medicine was the most surprising, and it sounds silly to almost say that, because to me, now that I have spent years really looking into this, I am a little embarrassed to have had that realization because -- what the hell was I doing before?,” he candidly wonders. “But I do think that there is a culture inflection with science in the sense that even if you are learning about the cannabinoid system and learning about the substance and the various neurotransmitters, it is still done under the context of this as a substance that is demonized and disparaged and I fell into that camp.”

Dr. Gupta reasons he fell into that camp because U.S. studies were never designed to find the benefits of cannabis. “The system was designed to find the harm and those were the studies getting funded, not studies that were designed to look for the benefit. But the point is you had a distorted picture of what marijuana could do. When you start looking at labs that aren’t dependent on some sort of state or federal funding or labs that are outside of the U.S., a very different picture emerged.”

Even with a lack of particularly compelling research, the premise behind the first “Weed,” which took 18 months to create, was to put a spotlight on medical marijuana because it was increasingly finding its way onto state ballots, and so as CNN’s chief medical correspondent, Dr. Gupta believed people should be informed.

Surprising and, yet, not surprisingly there was no detailed framework laid out before Dr. Gupta began filming the first “Weed.” “Frankly, when we first started thinking about “Weed” 1, I thought it was going to be looking at the science and the science still wasn’t particularly compelling. I did not have a real preconceived notion other than what I had learned before about medicinal marijuana and I was not particularly impressed by the literature at that point. It was more of an eyes-wide-open experience, certainly for the first documentary.”

He didn’t foresee the story of Charlotte Figi, who Charlotte’s Web is named for, would dominate both the first “Weed” documentary and the ensuing national conversation about medicinal cannabis. “We were following these people along with some of the scientists. Some of the studies were ongoing and some of the data came back even during the filming of our documentary so there was a lot we didn’t know other than the biggest, sort of broadest brushstroke of what we wanted to pursue,” Dr. Gupta further explains. “Even with the other ones (“Weed” 2 and 3), I didn’t know how the stories of these cannabis refugees were going to play out. I didn’t know if people were actually going to move, leave their homes and go to a different state.”

When “Weed” first came out, Dr. Gupta thought people would “challenge, criticize and ridicule it,” he also believed at the time “that there would be some people who would get something important out of this. My thinking was maybe it influences somebody with a child with Dravet syndrome and all hope is not lost and that, maybe, there is something else.”

Although Dr. Gupta was prepared for criticism, he didn’t foresee how quickly the dark shadow of stigmatization would begin to fade after the first “Weed” aired in 2013. “I didn’t think we would start to see the political movement around it and, to be fair, there was already political movement around it -- it wasn’t like I started it by any means. But I do think that the acceptance of states in the south, like Georgia and Alabama, where I would not have ever thought that this would remotely pass, or that it would even be on the ballot, has been pleasantly surprisingly.”

As for the content of the fourth “Weed” documentary slated to come out later this year, Dr. Gupta is still working on it but thinks the fact that eight states passed some form of legalized cannabis during the November presidential election will definitely factor in. “Our bend is going to be changed because of this election, but still very much predicated on evidence-based science.

“You can’t completely disentangle those two issues, they are entangled. But, if anything, I think we are still going to be leaning toward more of the evidence-based science behind this issue to the extent that evidence-based science can and should inform policy. I think that’s going to be a big part of what we talk about and whether or not that is presenting things to the cabinet or elected officials and seeing what happens with the CARERS Act (The Compassionate Access, Research Expansion, and Respect States Act introduced in March 2015) will be really important.”

Moving away from cannabis policy, which can be exasperating on its own, Dr. Gupta continues to be flummoxed by the lack of research in the field, especially for queries as simple as: is cannabis a preventative medicine?

After a long pause considering the question, he works his way to an answer. “I struggle with these questions a little bit and it’s frustrating because we, I, should be able to answer that question without hesitation. This plant has been around a long time and we have had decades to be able to answer this question, but because of the system we have not been able to do those sorts of studies.

The problem with research, though, is finding scientists and researchers who will put up with the hassles of cannabis’ classification as a Schedule I drug. “I think there’s a lot of really smart young scientists who are trying to figure out what they want to do with their lives, where they want to make their mark in terms of scientific progress who are very interested in this topic, but are probably not going to do it because they will get looked at sideways from their professors or worried that they can’t get the funding to get it done.”

However, once federal prohibition gets lifted, which Dr. Gupta estimates a five-year timeline as being realistic, the culture will shift. “When the signal comes, in terms of an end to federal prohibition, I think there will be a lot of obvious things that happen in terms of access and research dollars. I think there will be some less intuitive things that will happen as well and I think a lot of that will happen among my colleagues in the scientific community who will be much more likely to study this and progress it.”

One of the areas in most dire need of research is the nation’s opioid epidemic. New statistics from the Centers for Disease Control (CDC) released in December show that overdose deaths rose 11 percent in 2015, to 52,404, which is the most ever.

“It’s a horrifying statistic to think about the number of people who die from opioid overdoses. It’s the number one cause of unintentional death, of which 60 percent are made up from prescription opioids,” Dr. Gupta incredulously points out. He continues, “At some point, somebody is going to come to us from another planet and look at us and say, ‘Let me get this straight, you guys are literally killing yourselves, accidentally, using a medication that is supposed to relieve suffering and pain?’ It makes no sense.”

Also senseless to Dr. Gupta are the moral implications of keeping cannabis illegal. “In none of my documentaries did I ever get into the concept of moral equivalence because I thought it was too easy, too cheap, right?,” he questions. “I wanted everything to stand on its own merits. But in the back of my mind, I couldn’t believe we have this substance out there that kills somebody every 19 minutes, and, yet, something that could have real benefit for people, and we could not find evidence of deadly overdose from, could not even be studied. That just wasn’t right.

“I think the fact that there was data from other places around the world -- and there was certainly a lot of anecdotal data within the United States -- and the alternatives people were left with were opioids or even, frankly, the anti-seizure medications, which can also be very toxic, were so accepted and, yet, this was not even allowed to be studied. That didn’t sit well.”

Dr. Gupta sees a benefit to using medicinal marijuana for those patients caught up in the opioid epidemic. “Sometimes it’s a result of an injured nerve and that’s very hard pain to treat and opioids aren’t particularly good at treating that kind of pain. Not only do I think that medical marijuana can be helpful in reducing opioid dependence and aiding first time users, but I also think it can actually be helpful in treating a type of pain that opioids just aren’t that good at treating. It’s doing something that the existing ladder of treatments doesn’t do very well.”

Cannabis has the potential to be a game changer for opioid abusers, however, it will be up to leaders like Sanjay Gupta to get the message out into the world. He just has to figure out how to get people to open their minds. But it’s not like he doesn’t have firsthand experience with that.