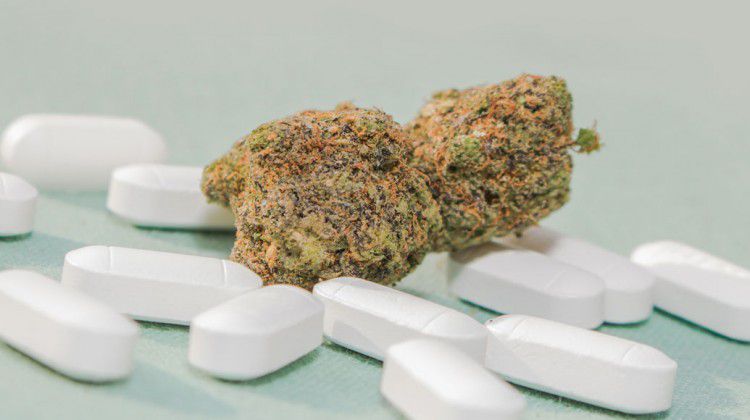 The Nevada State Legislature is currently considering whether or not to add opioid addiction as a qualifier for a patient medical marijuana card. Senate Bill 228, sponsored by Senator Pat Spearman, proposes that physicians be allowed to recommend cannabis use as a treatment for opioid addiction. (Editor’s note: SB 228 was amended into SB 374 and passed out of the Senate Judiciary committee on April 12.)

As the bill snakes its way through the two legislative houses over the next several weeks, state lawmakers will need to decide its validity with the big question being: Can medical cannabis help reduce opioid abuse by treating pain and ameliorating adverse symptoms and cravings during withdrawal periods?

But first, let’s review where we are with regard to the nation’s opioid crisis. In 2012, over 2.1 million people in the US were addicted to prescription opioid medications while an additional 467,000 people were addicted to heroin.1 In 2015, there were over 20,000 overdose deaths related to prescription opioids and almost 13,000 overdose deaths related to heroin.2 Four out of five new heroin users started out misusing prescription opioids.3 In a 2014 survey of people in treatment for opioid addiction, 94 percent of the respondents said they switched to heroin because prescription opioids were more expensive and harder to acquire.4 In states that have passed medical cannabis laws, there is a significant decrease in opioid overdose mortality rate (25 percent decline), a lower number of prescriptions written for opioids, and a reduction in opioid-positive test screens in fatal car crashes.5-7

Opioids produce a sense of well-being and pleasure by stimulating the regions in the brain associated with reward. Opioid addiction is a chronic disease and needs to be viewed as such.  As with other chronic diseases, opioid addiction relapse back into drug abuse is very probable.  Just as hypertension and diabetes require ongoing treatment, so does opioid addiction. More often than not when relapse occurs with opioid addiction, many consider the treatment a failure.  Compare this to a patient on medications for hypertension or diabetes whose symptoms improve while on medication but relapse once medication is stopped. Negative emotional states and cognitive disturbances are two characteristics of addiction which can trigger craving and relapse, thus contributing to the vicious cycle of opioid abuse. Therefore, a successful treatment for opioid addiction requires a dynamic process where continual evaluation and modifications are necessary.

Current treatments for opioid addiction target detoxification, withdrawal symptom management, and psychological counseling. Pharmacological treatments directly target the opioid system.  These medications also have their own challenges such as abuse potential and strict governmental regulations. Alternative pathway medications are necessary to battle the opioid epidemic and the addiction that ensues.

Cannabinoids are a class of chemical compounds that act on the cannabinoid receptors in different cells in the body and exert their action via altering neurotransmitter release in the brain and other substances in other cells. The two major cannabinoids found in cannabis (phytocannabinoids) are tetrahydrocannabinol (THC) and cannabidiol (CBD). THC tends to be rewarding and can enhance sensitivity to other drugs. CBD, on the other hand, has a low reinforcing profile with limited abuse potential and it appears to inhibit drug seeking behavior.  Furthermore, CBD decreases stress vulnerability and reduces anxiety.

There is a bit of clinical research to support use of medical cannabis to treat opioid addiction involving human subjects. In the limited small human studies, CBD reduced heroin related cravings in heroin abusers.8 In preclinical animal models, there appears to be a slight trend supporting the benefits of CBD in treating aberrant behaviors associated with addiction as well as alleviating withdrawal symptoms. A study with animal models using CBD resulted in improved opioid withdrawal symptoms as well as lessening heroin seeking behavior.9,10 In another animal study, CBD curtailed the reward-facilitating effect of morphine. The authors hypothesized that CBD interferes with the brain reward mechanism, thus CBD may diminish the brain reward functioning effects of opioids.11

Currently most medications utilized to treat opioid addiction directly target the endogenous opioid system. Medical cannabis and/or some of the plant's cannabinoids, such as CBD, could offer an alternative line of therapy that can alter opioid-related behavior, which can lead to reduction of adverse effects associated with current addiction treatment strategies. Given the potential to reduce withdrawal symptoms associated with cessation of opioid intake and the potential for treatment of opioid addiction, as outlined in SB 228 now 374, I believe opioid addiction should be added to the current qualifying medical conditions where medical cannabis can be used.