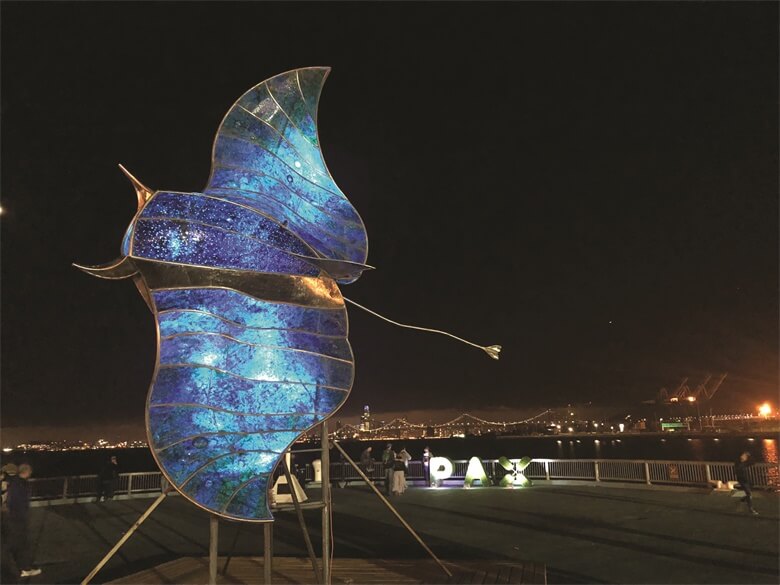 Peter Hazel discovered he was an artist later in life. The penny dropped while Hazel, 52 at the time, was on a trip to Barcelona. “I saw what Gaudi had done and I was just blown away. I thought I bet I could do that. So, I made a gift for someone, a little birdbath, similar to what Gaudi did with mosaics. Being a granite contactor, it was right down my alley. It was a piece of cake and everyone reacted to it and said, ‘Oh, you’re an artist.’”

That serendipitous connection was made nine years ago just after the recession. “I got burned out on the tile and granite thing, I lost a bunch of clients. It was really tough. I was done so I was just having lots of fun making art.”

Two years ago, Hazel completely cut the strings to the tile and granite business he had owned for 28 years. “It forced me to sink or swim because I wouldn’t have any income and I could completely focus on art. I threw myself into this unknown. I thought, ‘Aw heck, you live only, I’m gonna go for it.’”

Hazel’s most recognizable work has tended toward an oceanic theme including fish, a manta ray, octopus (pictured on our cover) and jellyfish. “Being a new artist, I’m trying to figure out my style. The thing is, it lends itself to ocean creatures, it’s not that I am trying to do ocean creatures it’s just that mosaics look better on a fish and an octopus than something else like a bird.”

However, he just finished a nine-foot buffalo that’s all mosaic. And he is currently working on a commission of wolves in a palette of blues, silver and greys. “I don’t just want to be the sea creature guy unless I’m selling a million dollars’ worth of sea creatures then I’m happy to be that guy,” he relays with a chuckle.

“With my stuff I am not trying to send a message,” says Hazel, 62. “I would like to be known as the number one mosaic sculptor in the US, and I think I am. I haven’t seen anyone do anything as tight and clean and colorful as what I do.”

But Hazel insists he hasn’t quite hit the big time yet. Being an artist “is really similar to being a rock star, you’re chasing that dream, you hopefully write that song that’s a hit and off you go.”

For Burning Man this year, Hazel and his team are making a 40-foot-long mosaic crocodile in a palette of navy blue, green and turquoise with fins and spikes made of blown grass that will light up. peterhazel.com