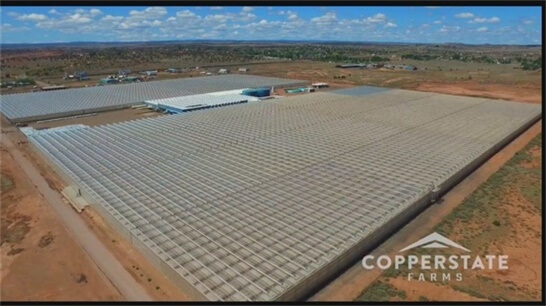 How did Copperstate Farms get its start?

I teamed up with a good friend of mine, and we started Copperstate a few years ago. Not two weeks after we began looking for a facility, Naturesweet, a large cherry tomato producer, announced that they were pulling out of a 40-acre greenhouse in Snowflake, Arizona. It was almost as if the stars had aligned.

We went to work to get the permit from the town council in Snowflake. It was a long process, and quite a few people in town were nervous about the idea. I assured them that the farm would be a significant economic boon to the town, and I promised to focus on hiring local labor rather than outsourcing.

The town agreed to let us start growing and converting the greenhouse. I initially hired 130 people, and nowadays we’re over 200 people. We’re the largest employer in Snowflake, and one of the largest in the county.

Copperstate is a massive farm. How did you secure the capital necessary to acquire and renovate the facility?

Because of my background in other agricultural businesses, I’ve been raising money and entering new ventures like this for 20-25 years. So, I started like I would with any other business: I came up with a business plan and figured out how to finance it. I spoke with some private investors whom I’ve worked with before and explained Copperstate’s business plan. Most of them were eager to hop on board.

How difficult is the conversion process for facilities that were designed for tomatoes?

The most time-consuming thing was taking down the energy curtains and replacing them with light deprivation curtains. We also made other subtle improvements. High quality cannabis requires constant airflow, so we added a lot of ventilation equipment to improve it. We also had to design a system to allow ventilation to remain on when the light deprivation curtains are in place.

I am striving for customer service that is above and beyond. What I mean is that a lot of dispensaries in Arizona don’t have a reliable supply of cannabis. Many dispensaries have to shop around from multiple growers and supplement their own stock to just have enough.

I come from conventional agriculture, where our customers are number one. We want them to come back to us for our reliability and our quality. We’re willing to communicate with our customers about the product and if there are any issues. I want to make the experience for a dispensary owner as easy as possible so that they can focus on their sales.

What happened while you were pitching Copperstate to the town of Snowflake?

One of our competitors hired an attorney and launched a two-year smear campaign against me. Their team even dropped pamphlets all around Snowflake claiming that I came from a Mexican drug cartel and there’d be druggies all over town. They tried to extort me into reducing the amount of space I’d grow in. They even went so far as to find a few strawmen in the town to file a lawsuit against me. We ended up winning. The opposing attorney never said who his real client was, but there was a whole lot of shadiness about it.

Where do you picture the future of the Arizona cannabis market in 10 years?

Ten years from now, we will have adult-use legalized in Arizona. I don’t believe there will be federal legalization by that point though. That said, if I’m proven wrong, we’re in a great strategic position to compete all across the American Southwest.

What’s been your biggest challenge?

With cannabis, I’d say that ⅔ of the work actually happens after the harvest, and only ⅓ of the work happens in the greenhouse. That took a bit of a learning on my part.

What’s been your biggest success?

One of the best parts of forming Copperstate is just seeing how rewarding it has been for everybody. It’s hard to pay people well in commercial agriculture. You pay the absolute minimum you can get away with because of tight margins, and there’s high turnover because of the difficulty of the work and the low pay. But with cannabis, that paradigm has been entirely flipped on its head. I’m able to pay people a living wage and provide full benefits.

What was your response to the 2016 ballot initiative in which recreational marijuana use in Arizona was not passed?

I was surprised and also appalled by the donations from opiate manufacturers. They were running a “Save the children!” campaign while they were making drugs that are causing deaths all over the country from the opioid epidemic. The amount of hypocrisy from anti-legalization groups makes me sad.

This article has been paraphrased with permission from Growers Network.

Want to read more? Head on over to Growers Network to read the full article.

A battle of the lights: HPS versus ...

Growing your own cannabis on a budg ...