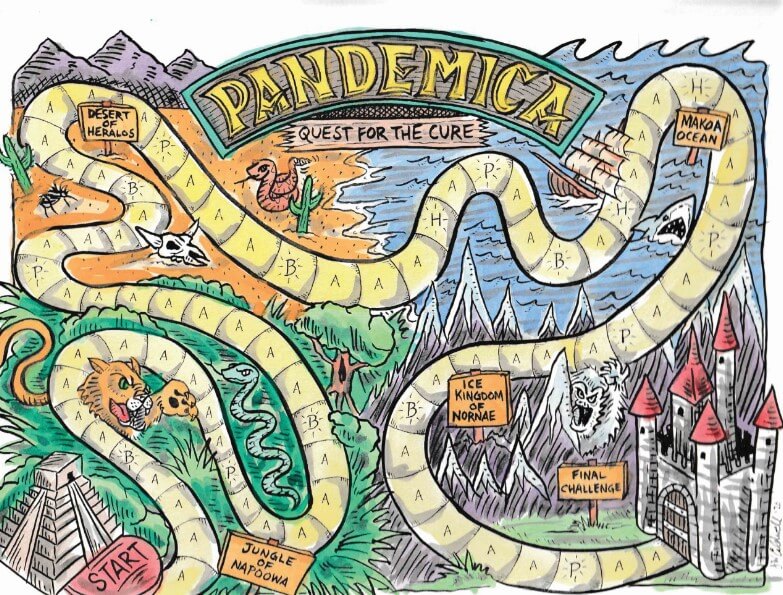 Pandemica! (or, how I learned to stop worrying and love the Coronavirus)

Pandemica! (or, how I learned to stop worrying and love the Coronavirus)

Times are tough right now. With over 130,000 dead [as we went to press] from COVID-19, double-digit unemployment, and police still killing black people with impunity, it can feel like we are simply beyond hope. Cooped up in our homes for months, many of us are unable to work and logjammed in a shit show offering unemployment relief in mostly theory. We’re pelted with misinformation and bullshit from all sides. Some of us are quarantined with people we would no longer want to be anywhere near, but there are no other options at the moment so Netflix and chill just doesn’t cut it when there is nothing to be chill about.

We have found an answer in game night. Yes, that old chestnut of quality family time and escapism [for my LDS friends, it’s like a weekly at-home version of Burning Man that’s literally all hugs, no drugs]. It’s been fun teaching The Kid [my 13-year-old daughter] some of the games my wife and I grew up with i.e. Backgammon and strip poker [kidding]. Also, there are both adult and kids’ versions of Cards Against Humanity, so you can either dial it up or down to whatever twisted level of humor your family appreciates.

Unfortunately, even family game night isn’t going to get you through being home with each other night after night, week after week. By May our family was running out of games to play so we began coming up with our own. I was inspired by the little girl on Twitter singing, “I Wonder What’s Inside Your Butthole?,” but in reality that’s a pretty quick game [hint: its poop, and if it’s anything else, this just isn’t family game night anymore].

Then one night, after an unusually lengthy in-house social distance session, The Kid came downstairs with four pieces of paper, a die and some toys. She showed us a game she called Fantasia, and we needed to burp when we said the name. It was already beer:30 by my watch so I was happy to oblige, but I immediately thought about how guarded and litigious those Mouse House folks can be about their intellectual property.

The game consists of four lands for players to travel through and a final challenge. To follow is an “in the moment” account of Pandemica as our Game Master [The Kid] led us through it.

We place our game pieces — a miniature Russian doll, a plushie fish and a Thanos/Avengers action figure — at the beginning of the game board. Our journey begins in a dense, humid denizen of exotic wonders and perils. After a round of die rolls, my wife’s Russian doll lands on a bonus square. Players who land on the bonus square must answer a riddle correctly to get a shortcut through to the other side of the path. If answered incorrectly, the player must start the section of the map over again. This riddle asks: “I can fly but have no wings. I can cry but I have no eyes. Wherever I go, darkness follows me. What am I?” [riddle answers can be found at the end of this article, but no cheating!].

As we stand there in the thick jungle bush racking our brains for the answer, the sky grows dark. A swarm of mosquitoes starts to set in, and we are barely able to come up with the correct answer and jump through the shortcut just as a wiry puma emerges from the foliage. We emerge on the other side of the jungle and make our way along the sun’s path above us.

Within a roll, our group comes across a merchant walking with a horse. The horse says: “Help me! He kidnapped me!” [at this point, the half a gummy I took beforehand is starting to kick in so talking horses are completely understandable]. My Thanos frees the horse and it gives me an actual whistle to move seven spaces when I blow it. I put the whistle around my neck and forge on through the dense thicket of nettles.

Eventually we come to a clearing with some lush vegetation bearing juicy looking berries. It is a Bonga berry, and The Kid’s plushie fish rolls and lands on them. Whomever takes the berry will gain 20 health points at the expense of -10 from another player. She picks the Bonga berry and we come to the edge of the clearing only to see a vast desert ahead.

The air turns dry and the sun bears down on us as we make our way over dune after dune of Saharan barrenness. Vultures fly overhead and tarantulas cross our path frequently as we grow thirsty and weak. We see an oasis ahead and run toward it, only to be tricked by a merciless mirage. There is an old beggar woman lying passed out on the ground, and we give her what little water we have. Reviving her costs me 25 health points, but when she regains consciousness she offers me a golden orb as a reward. I must pick a number between one and three then spin a wheel and if it lands on my number, I get the orb. I choose the number three, the number of members in our family. I spin the wheel and the number is two. I am now cursed to lose 5 health points each move.

As we scale yet another sandy ridge, we see…water. Not a mirage, but a coastline! With a village! We move quickly down the slope and I am confronted with another bonus square. The riddle asks: “I am not alive, but I grow. I don't have lungs, but I need air and I don't have a mouth. What am I?” The desert heat is beyond inferno levels at this point, which gives us a clue and allows us to correctly answer. We reach the seaside village intact, but my newly acquired curse has diminished my health to half.

In the village of Makoa, named after the body of water it relies on for its livelihood, we find a bustle of merchant activity, including alehouses and brothels filled with inhabitants attempting to lure drunken sailors with their siren songs. The local libation is called Makoa Juice. Drinking it will double your health so when my wife lands on this power up, she offers it to me and I drink deeply and can feel the health coursing back into my veins [I also went to the fridge to get another beer]. As I recover, The Kid moves ahead and initiates a trade with a fisherman, exchanging the golden orb to secure a boat.

We take to the sea, hopeful for what we will find on the other side. As the wind caresses our sails and the coastline begins to fade, the water alongside our boat starts to foam and froth. Suddenly, a long tusk bursts out of the water and a narwhal rises to say: “Bye Buddy! Hope you find your dad!” [That’s from Will Ferrell’s Elf. It’s the Game Master’s favorite.] As we move across the water we learn that by having the boat we are able to bypass “hides” [squares that require the player who lands on them to pause the game until a particular color is located in the house]. At this point I’m seeing plenty of colors, so I’m glad to keep the flow of the game moving. Avoiding the hides allows us to make time on the game and we get across the ocean easily with just one riddle: “What is greater than god? More wicked than the devil? The rich need it. The poor have it, and if you eat it you die.” [Remind me to check in on The Kid’s spiritual world view before this is all over.]

The Ice Kingdom of Nornae

At the end of the ocean is a mountainous land of year-round winter known as the Ice Kingdom of Nornae. We disembark and camp for the night, using the boat as firewood and burning it for warmth. Here we are met with another riddle: “You see a boat filled with people. It has not sunk but when you look again, you don't see a single person on the boat. Why?”

At dawn, we follow a snowplowed path through the canyons. As hypothermia sets in, all our health levels begin to dwindle. The Game Master rolls, and we come upon a luscious fur coat made from an animal skin none of us have ever seen before. It can protect the wearer from hypothermia for two turns [c’mon, big rolls!].

As we make our way past a frozen cave, a giant Abominable Snowman lurches out at us with…a tray of yellow sno-cones? “No, no, no, don’t worry. They’re lemon.” He smiles [Monsters Inc. is also a favorite of the Game Master. I may be in trouble with Disney after all]. Still, even with this frozen friendliness it is clear not all of us may make it.

We do [because its family game night, right?)], and at the end of our trek through rock and ice crevasses, we reach the castle [because you can’t have a kingdom without a castle]. We enter its ice crystal halls and into a main chamber where sits the Ice Queen upon her throne. “You have come a long way to this castle’s door,” she says. “To end your quest, you must correctly answer two out of four.” She then proceeds to give us the final challenge which is made up of four riddles [where we could potentially lose 30 health points for every wrong answer]:

1.) What word starts with E and ends with E but only has one letter in it?

2.) It’s shorter than the rest, but when you’re happy you raise it up like it’s the best. What is it?

3.) You can carry it everywhere you go, and it does not get heavy. What is it?

We stopped the game because we were able to get two out of four riddles and it was also after 1 a.m. But I went to bed that night with an incredible feeling. We were able to complete our quest by working together and looking out for one another. We learned that riddles are just problems that can be solved but walking away from them never solves anything. Maybe this meant something in the middle of all this crap currently happening around us. Maybe by completing the quest, the universe had rewarded us with a world outside we could return to just like it was before. Maybe even better? I couldn’t wait to wake up in the morning and go for a walk!

Special thanks to Las Vegas artist JW Caldwell for turning The Kid’s four pieces of paper into a totally rad game board! Make sure to follow him and his work at @thisisridiculous13 on Instagram.