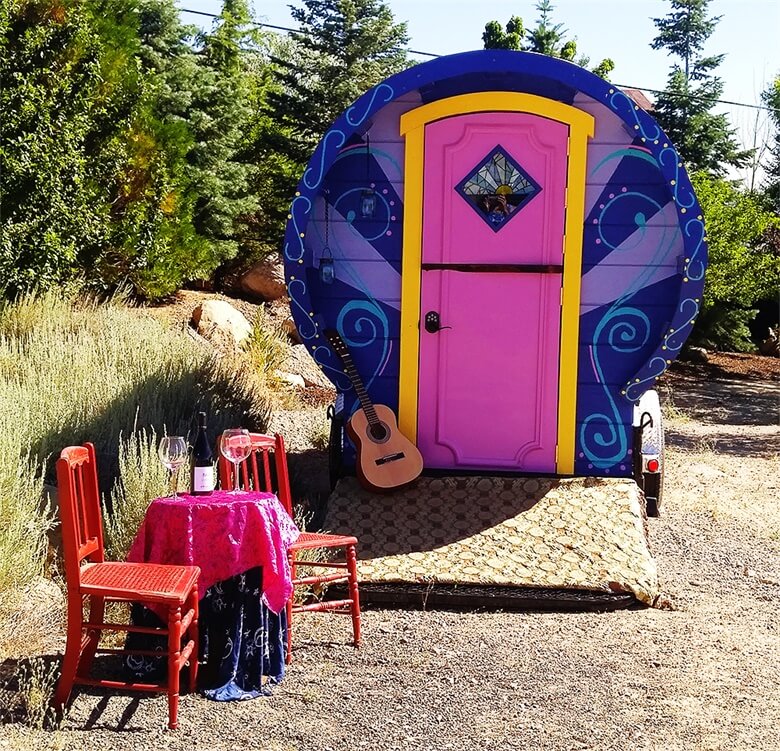 Finding peace and tranquility by the light of the Gypsy Moon

Finding peace and tranquility by the light of the Gypsy Moon

The gypsy spirit rides the wind in search of those who yearn to explore. It can catch you by surprise and carry away your day-to-day burdens as you stray from routine and fancy a wandering. Old Man Winter gives up his ghost, and the earth comes to life as it basks in the lingering daylight. The heart is willing, and all that is necessary is the proper vessel.

Sometimes, the proper vessel is a treehouse. A treehouse on wheels, built in the traditional caravan style of the gypsy travelers of yesteryear.

Reno’s Gypsy Getaway Wagons, gypsygetawaywagons.com, provide a variety of wagons for any kind of camping adventure, but for me and my family, it was specifically the one named Teagan’s Treehouse. It showed up outside our home, an amazing blend of modern technology and classic design, looking like an old western settler’s wagon wrapped in steel. So singular, cars slowed down to look, and dog walkers stopped to take photos.

Surprisingly easy to attach to your vehicle, it’s a lot like handling the moving vans we drove to get to Carson City when we relocated. As we stopped at Target to pick up some stuff for our weekend getaway, I parked it perpendicularly over a row of empty parking spots far away from anywhere I could bump into anything with it. Once out on the open road, our vehicle hummed along with the 5- x 14-foot treehouse in tow.

With the strong winds native to the Carson Valley, you don’t want to get above 55 mph with a trailer. This gave us more time to spot the calves among the cattle in the field, play license plate poker with the cars that passed us, and roll the windows down so our dogs could poke their heads out.

We headed south on Hwy 395 through Minden and Gardnerville, then up through the hills that edge the California/Nevada border. Just before Topaz Lake, we turned off and headed east towards the farmlands of Smith Valley. Along the river through Wilson Canyon and off the main road just south of Yerington we headed east on a nondescript dirt road and soon reached the state park campsite at Pitchfork Ranch.

Pitchfork is part of a 29-mile stretch of recently donated ranch property along the East Walker River that was formerly part of four historic ranches—the Pitchfork, Rafter 7, Flying M, and Nine Mile—gifted to the state of Nevada. Currently, only Pitchfork and a portion of Nine Mile are open to the public. The ranch land became available after the Walker Basin Conservancy, a non-profit environmental group seeking to restore Walker Lake, bought the properties from private owners. The gift, estimated to be worth about $8 million, opens thousands of acres of ranchland to the public that was formerly off-limits due to private ownership for more than a century.

The facilities at Pitchfork are very new and exceptionally clean, with shower rooms available. Not that they would be necessary, as the treehouse has an 18-gallon tank, sink basin and showerhead for open air showering. It also has a two-burner stove with a propane tank attached at the front, French press and tea pot, and solar-powered lighting. There’s a queen bed with a twin trundle that pulls out underneath it.

There were other gypsy spirits at the campground. We met a veteran who had lost everything in the Great Recession, lived in a camper and went from campground to campground year-round. There were also Romanian dog lovers who were discovering America in an RV. Normally, there would have been a campsite cocktail hour, but as the afternoon turned to evening, winter gave one last show of force and the wind gusted and snow fell. We abandoned the firepit outside for the warmth and comfort of the caravan, eating crackers and playing cards. When we packed it in for the evening, the dogs curled up at the edge of the bed and contributed to the interior warmth as the temperature dropped outside.

It was Spring Forward Sunday morning and as my family continued to sleep, I went outside to stand among the light dusting of snow just before dawn. It was thrilling to breathe it in, and even the cows in the not-so-far-away field seemed to share in the solitude and specialness of the moment. Within a couple of hours, we would pack up and head home, but, in that instant, I had found my gypsy spirit. Or it had found me. Either way, I had Teagan’s Treehouse to thank for it.

One final thing: Cooking in the caravan inspired two improvised recipes for when the camping munchies set in. One was a breakfast grilled cheese sandwich, in which you cook the bacon first, scramble the egg then make the grilled cheese all in the same pan (for extra yum factor, use herb cream cheese spread on the outside of the bread instead of butter). The other was a s’mores pancake (since we had to abandon the campfire and any hope for traditional s’mores). By breaking up and incorporating the individual ingredients into the pancake mix, my 12-year-old got to have her (pan)cake and eat it too!