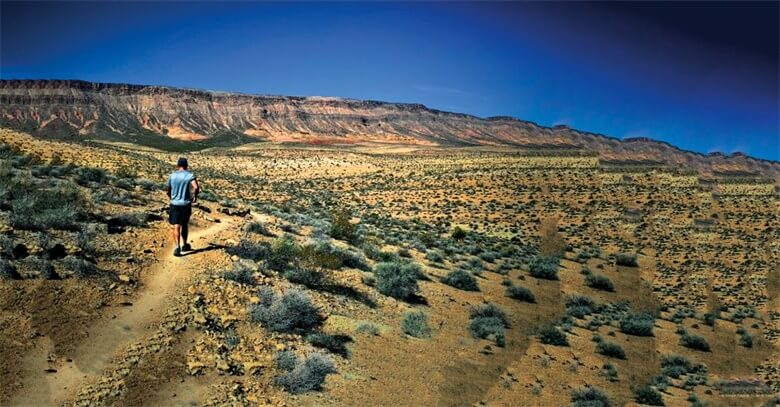 The relationship between cannabis and long-distance running

The relationship between cannabis and long-distance running

Almost everyone with a working consciousness, regardless of their walk of life, needs a cathartic output for finding relaxation and mental clarity. An activity, exercise routine or hobby that allows one to disconnect completely, if only temporarily, from the stresses and anxieties of daily life. For some, it could be something as calming and therapeutic as yoga or listening to 10-hour ASMR videos on YouTube. For others, it’s doing something on the extreme and heart-pounding other side of the spectrum such as skydiving or mixed martial arts. A select few even focus on a creative outlet—be that everything from music production to sculpting.

Although Southern Nevada’s version of an American Ibiza is primarily known as a global party capital and draws in millions of tourists every year to fulfill their most sinful desires, Las Vegas possesses equally as much potential to simultaneously be a global hiking/outdoor adventure capital. Dozens of expansive hiking trails of all terrain types stretch and wind across the captivating and endless miles of the Mojave Desert in every imaginable direction. That’s before you even venture to Red Rock Canyon National Conservation Area, with 45 trails of various difficulties and a combined total of 12.5 miles of trail length.

Living in the picturesque suburbs near Mesa Park and within close walking distance of the numerous hiking trails that Mesa Trailhead offers, which flow directly into the vastness of Red Rock Canyon, Justin Cohen has received a profound amount of clarity, self-realization and exercise from running/hiking across these many trails during his nearly two decades as a resident of Las Vegas.

Cohen moved to Las Vegas as a result of a job offer during the turbulent post-9/11 economy from the very company that almost singlehandedly made being a travel agent a virtually obsolete profession, none other than Expedia. “After a few weeks of fun interviewing, they (Expedia) offered me a job out in Vegas. Just around July 4th, 2002—in a week that averaged 117-degree daily high—I moved out here,” recalled Cohen, who is now applying his extensive knowledge in online marketing/advertising to a budding industry that’s growing at a wildly exponential rate (no puns intended) as a partner of cannabis marketing company MaJor Group.

Driving across the microscopically manicured, agrestic-like Summerlin suburbs, Cohen’s description of the upscale area and its close proximity to the mountains rang incredibly accurate. “As you saw, the houses are a couple hundred yards from the mountains and there are hundreds of miles of trails up and down every bit of elevation. It’s addictive, so I get as many hours out there as I can in a week,” the Boston native described as he pointed out a couple of his favorite trails visible from his back yard.

As a fitness- and wellness-minded individual who runs an average of 30 miles a week across the everchanging terrain of the several aforementioned canyon trails, Cohen more than qualifies as a long-distance runner—far beyond an avid hiker and possibly even a connoisseur of the Red Rock/Mesa Park trails.

Whereas an average hiker would only stick to the same few trails that provide similar comfort and predictability during every hike, Cohen enjoys branching out far beyond his favorite paths.

“I ran in the (Red Rock Canyon) valley a lot when I lived in North Summerlin, up by Summerlin Parkway. I would find trails, paths and routes throughout that I could connect to get that distance. I do a lot of running around Red Rock and the Red Rock loop as well as running along the south side of Charleston (Boulevard). I run across the Cowboy Trails, which a lot of people know as where the horses are.”

However, the internet marketing aficionado is hesitant to refer to himself personally as a “long-distance runner” given the fellow runners he’s become acquainted with who more accurately define the term to an extreme degree. “I wouldn’t consider it long distance running because some folks I know run crazy ultra 40-, 50-, 100-mile things,” Cohen stated humbly, “but I like to run 5-10 miles pretty regularly and get into some 10-20 mile runs every month.”

Unlike the seemingly endless list of ridiculously overpriced supplements that focus on a pre-workout energy boost or post-workout recovery, Cohen’s experienced opinion is that the best supplement on the market can’t be purchased at GNC, at least not currently. It’s a supplement which, unlike C4 or creatine, is a bit more synonymous with Willie Nelson and Snoop Dogg as opposed to professional bodybuilders.

When asked how cannabis benefits both his physical health along with his lengthy runs that would be considered a marathon to the layman, Cohen listed more positive effects than a knockoff B vitamin supplement could ever dream of having on its label. Cohen ticks off “everything from hydration to muscle fitness and lung capacity to relief from a traumatic joint injury in my ankle from when I broke my ankle hiking a few years ago. CBD and THC help with everything from relieving inflammation to minimizing pain to recovery from a ‘runner muscle hangover.’”

Cohen isn’t exclusive in any conceivable way about which specific cannabis product formats may assist in workout recovery but does have some preferences and recommendations based on his experience. “From a product standpoint, I would most recommend either tinctures or capsules of CBD because it’s easier to get a close, accurate measurement of what you’re taking. On the flipside, I find that THC, be it vapor pens or flower, is excellent for opening the mind if you’re going for a long run and effectively have a meditative experience out in the desert for 30 or 60 minutes on pretty much a solo experience. THC and CBD combined certainly help it to be a great, always fun, run.”

According to Cohen, cannabis’ value as a purely all-natural workout supplement where other supplements have fallen short cannot be understated, especially for a “meditative experience in the desert.” I’ll fully admit that gazing out into the sparsely populated vastness of the Mojave with the only noise present being the inescapable winds as you take a hit from a Select Elite vape pen is a tranquil activity that’s possibly only second to midnight viewings of Bob Ross painting videos.

Fruits of a Cannabis Nature

Celebrate St. Patrick’s Day with a ...

A review of cannabis deserving of t ...