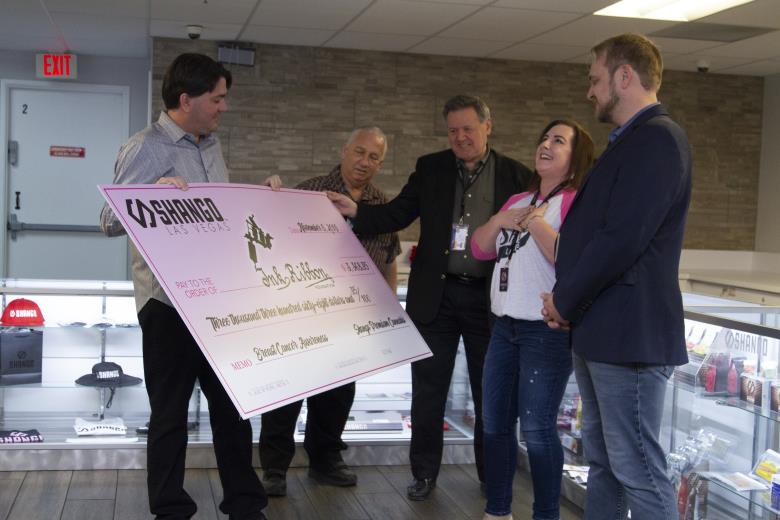 Kim Maddi, founder of Ink Ribbon Foundation, receives a donation of $3,368 from the owners of Shango Las Vegas. The donation resulted from a line of pink merchandise Shango created and sold during Breast Cancer Awareness Month in October.

Kim Maddi, founder of Ink Ribbon Foundation, a breast cancer charity, had to adjust her plans for 2019 after raking in far more donations than she expected during Breast Cancer Awareness Month in October. With a fledgling nonprofit, Maddi had hoped to sponsor one or two women for mastectomy scar cover-up tattoos and makeovers in the coming year.

Thanks to help from Shango Las Vegas dispensary, which partnered with Ink Ribbon Foundation during Breast Cancer Awareness Month, Maddi’s goals have expanded. Shango Premium Cannabis created pink merchandise to raise funds for the Las Vegas nonprofit group that pays for mastectomy scar cover-up tattoos. Shango created and sold a line of pink merchandise to sell, including men’s and women’s shirts, socks, hats, hoodies and lighters with pink logo accents. “That big money means we will be able to help at least three women at the start of 2019,” Maddi said after receiving her donation from Shango Las Vegas. “This has definitely changed our goals.”

Finding a nonprofit to donate funds has been a challenge for Shango. After being spurned by three national and a few local charities devoted to helping women with breast cancer, Shango Las Vegas turned to Ink Ribbon, which gladly accepted a new partnership. “Ink Ribbon Foundation is honored to accept donations from cannabis companies,” Maddi said. “I have been blown away by the professionalism within the cannabis community.”

Ink Ribbon provides cancer survivors in the Las Vegas area either mastectomy scar cover-up tattoos or areola restorative tattoos. Each woman also receives a photo shoot and a hair and makeup session. In all, the services provided come to $1,000 per client. “I wanted a way to give back to my new community of survivors in a real and tangible way, while also making mastectomy scar cover up tattoos more mainstream and accessible to those who want it,” Maddi said. “We are a little on the edgy side, which is why a partnership with the edgier side of natural medicine is a perfect fit.”

“To see that our donation will directly affect women who have suffered the traumas associated with breast cancer surgery makes our partnership with Ink Ribbon special,” Brandon Rexroad, founder and CEO of Shango. “To see how grateful she was to receive the donation makes us want to work harder in our next campaign. This is a gratifying opportunity for Shango Las Vegas to be able to help out a charity with the foresight to recognize the potential benefits of medical cannabis for both pre- and post-surgery situations. We admire their courage and we are thankful to have found Ink Ribbon.”