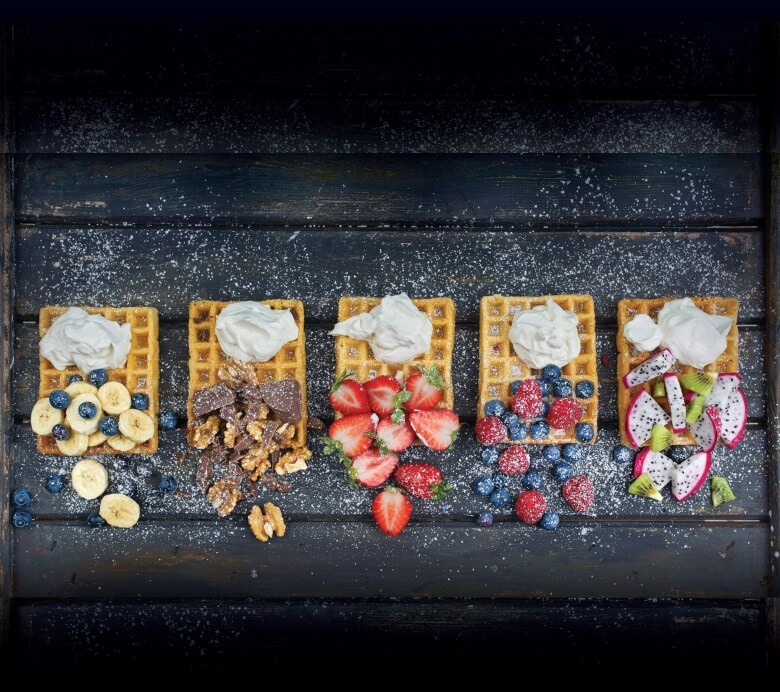 There were already three large Ziploc bags in her freezer, each filled with various flavor combinations prepared weeks prior. But those were for her personal quiet Sunday morning enjoyment. Today’s assemblage was part of a special breakfast she was preparing for her youngest daughter, Hannah. When asked what she wanted for her celebratory birthday dinner, Hannah instead requested a Waffle Bar Brunch.

It’s an obsession Hannah shares with her canna-chef mother, Rebecca. Once a month Rebecca dedicates herself to preparing a large batch of yet another taste sensation. She spends endless hours searching for new waffle ideas to add to her extensive repertoire that includes eggnog, malted milk, even meat waffles. Considering medicinal alternatives, she added cannabis into the mix. Her canna-waffles were immediately popular among friends and relatives.

Today Rebecca finds herself, once again, whipping egg whites past the ocean foam stage to soft wilting points and then stiff peaks like the snow-capped mountains of the Grand Tetons. The egg whites will soon be folded into individual mixing bowls of flour, sugar, and some with kief and other dry ingredients.

Lined up on the service table are several waffle irons. From Belgium squares etched with deep pocketed grids to irons with shallow cubes making for delicately, circular

waffles. Of course, the proverbial Mickey Mouse iron is among the choices along with one that is heart-shaped. A large jug of authentic Canadian maple syrup sits center table, after all National Maple Syrup Day is December 17. Containers of mix-ins and toppings to tease even the most rigid and traditional of waffliers completes the display.

Rebecca delights in knowing her immeasurable love of waffles serves as a kind of thread to her husband’s Greek heritage, the origin of this versatile treat. It was the Ancient Greeks who first roasted these flat cakes between two metal plates with long wooden handles. The obelios, as they were then known, consisted of grain flour and water, not the sugary, sweet waffles consumed today. Nor were they emblazoned with the face of Disney characters or the familiar grid design. Rather they were marked with Biblical scenes and religious icons. These smaller, wafer-like treats were consumed at the end of the meal as a symbolic final blessing. The obelios of Ancient Greece were later referred to as gaufres in France, and wafel in other parts of Europe. The now familiar spelling, using two “f’s,” is attributed to English chef Robert Smith in his 1725 cookbook “Court Cookery.” Not only did he alter the spelling, chef Smith also tinkered with the recipe. Creating a sweeter batter with the inclusion of granulated sugar, Chef flamboyantly also added a few other spins. Here’s an excerpt of his recipe: “Take flower, cream, sack, nutmeg, sugar, eggs, yeast, of what quantity you will; mix these to a batter, and let them stand to rise; then add a little melted butter, and bake one to try; if they burn, add more butter: melt butter, with sack, refin’d sugar, and orange-flower water for the sauce.”

Rebecca actually tried chef Smith’s recipe as written. In the opinion of her family, it barely qualified as a waffle. She later prepared the recipe using canna-butter, happily adding “more butter,” as suggested in the original version. She re-wrote the recipe as an adaptation with the inclusion of cannabis, writing it in the same vein as chef Smith with no measurements or amounts. She also replaced sack with Grand Marnier. Her husband changed his vote from a “never again” to a “yes, anytime.”

Rebecca’s love of waffles inspired her to do additional research where she learned, by the early 1700s, waffles were making appearances throughout Europe in varied taste connotations. Germany was famous for a coffee waffle. The French gaufres were more savory in nature with the inclusion of cloves, Spanish wine and lemon zest. These were most often sold by street vendors and eaten as an afternoon treat. The Dutch also enjoyed their waffles during afternoon tea along with a bit of chocolate. But it is the waffles of Belgium, where this treat took off, that has become as associated with the country as chocolate and beer. Lighter in texture, the Belgium waffle was thicker, rectangular in shape and coated with caramelized sugar. This sugary coating was created by one of the royal chefs to appease the sweet tooth of Prince Liège.

Waffles came to America in the mid-1700s care of the Dutch. That’s when they went from afternoon snack to breakfast food. An expensive import at the time, sugar was replaced with the more readily available and less costly liquid sweetener, maple syrup. The heavier, more substantial American Waffle was slathered with butter and syrup and was often as large as the plate upon which it was served.

In the midst of her research Rebecca discovered waffles are actually part of her own heritage. Her maiden name, Vernersch, was the surname of Belgium immigrants Maurice and Rose Vernersch. Hardly a common name in America, Rebecca dug deeper. It didn’t take much delving to discover she was indeed a direct descendent of Rose. While waffles made their debut in America at the 1962 World’s Fair in Seattle, it was in New York at the 1964 World’s Fair, that her newly identified ancestors, Maurice and Rose, turned Americans onto the glory and splendor of waffles.

Setting up shop in the Belgium Village, they posted a banner above their quaint, gabled rooftop hut advertising their “Brussels Waffles: A Bel-Gem Product.” For only a dollar a piece, the Vernersches sold their traditionally plain, yet fluffy, light-as-air, crispy waffles. These were far different than those flying saucer-like waffles American palates had grown accustomed to. The Vernersches offered a second choice at the Fair. Another delightfully plain waffle but this one was topped with sliced, fresh strawberries and a generous dollop of whipped cream. The scent of these buttery, sweet waffles wafted its way under the noses of the multitudes of people attending the Fair that year. That and the sight of these piled high, new fan-dangled waffles is what caused visitors to line up for a taste of this deviant galette.

Inspired by this newly acquired knowledge and familial connection to her beloved waffles, Rebecca was determined to make her daughter’s “Waffle Frolic” (the term used for waffle parties hosted in the 1740s by New Jersey and New York’s wealthier residents) the biggest and most expanded waffle celebration ever.

For the Flolicking Waffle Brunch party, photos of the Vernersch family along with other waffle-loving alumni were positioned at each seat in place of name cards. Hannah’s guests would choose a seat with a photo they believe resembles them most or simply looks interesting. One of the photos is of Thomas Jefferson. Evidently, Mr. Jefferson had his own love affair with waffles. While traveling through the Netherlands he bought four waffle irons that he’d purchased in Amsterdam and brought to America. Per Mr. Jefferson’s directive, waffles were a regular item on the menu at Monticello.

So, on this winter morning, Rebecca has let the historic juices of waffle-making flow. She summons the traits and talents of her ancestors and, yielding to her obsession, she beats, stirs and creates a variety of batters for Hannah’s Frolicking Waffle Bar Brunch. Flavors range from sweet berry to cranberry-cinnamon to chocolate chip. Savory options offer the inclusion of cardamom, her famous bacon and cheddar, or newcomer sweet potato and maple. For guests 21-and-over, there will be almond amaretto, banana-coconut Galliano, and Kahlua with cream. Of course, some will be infused with cannabis for those who like to start their mornings on the brighter side of the road. The traditional Liège Waffle will make an appearance, incorporated with chunks of Swedish Pearl Sugar, instead of orange sauce.

A large platter of down-home fried chicken cooked in a richly infused canna-oil is also set to debut as Rebecca’s version of Chicken ‘n Waffles. Rebecca couldn’t leave out this Harlem-born delicacy. One of our nation’s original fusion foods, it melds the comfort of Soul Food with the practicality of Pennsylvania Dutch cuisine.

No matter their preference or taste, Hannah’s guests will surely walk away from her birthday celebration knowing waffles can be enjoyed for breakfast, lunch or dinner. They might also find Rebecca’s weakness for waffles (with weed) is contagious.

zest of one large lemon

Cook in prepared waffle iron according to manufacturer’s directions. Top with lemon curd and blueberry compote.

Cook until curd thickens, coating the back of a spoon. Don’t allow mixture to boil. Pour curd into a bowl, placing plastic wrap onto surface to avoid skin forming on top.

To prepare Blueberry Compote simply combine 1-1/2 cups fresh or frozen blueberries along with 2-3 Tbsp. of water, ½ cup granulated sugar, and 1/8 tsp. lemon zest, into a medium saucepot. Cook over medium heat about 8 to 10 minutes. Stir in remaining blueberries, cook another 5-7 minutes or until compote has thickened.