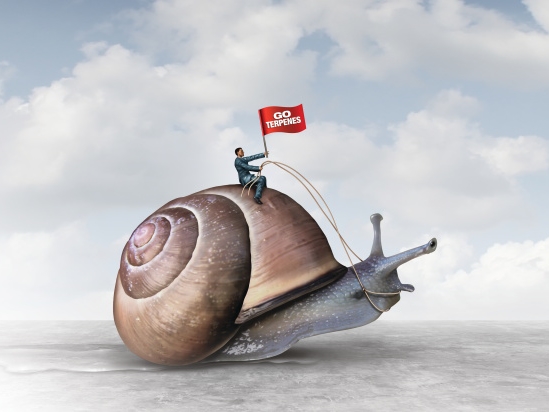 The Essence of Terpenes

The Essence of Terpenes

Although the public’s understanding of the value of terpenes is moving at a snail’s pace, 2019 could be the year these bouquets of healing properties find the spotlight.

Although the public’s understanding of the value of terpenes is moving at a snail’s pace, 2019 could be the year these bouquets of healing properties find the spotlight.

The most frequently question asked of any budtender is always going to be: What is the most potent product you have?

The response should always be: Smoke two joints if you need that much of a buzz but don’t cheat yourself out of any of the terpenes and the strongest benefits of the entourage effect.

The process of educating Nevadans and everyone else on the planet about terpenes is slow, confounded with erroneous claims, inferior products, and most of all, a lack of information.

Education about terpenes is moving at a snail’s pace with most consumers more concerned with a product’s psychoactive THC percentage than its healing benefits. But for those familiar with the entourage effect, every particle of every strain matters when it comes to the healing process. Just like the term rose describes many types and hundreds of basic varieties, so does the word cannabis. Each variety or strain has its own fragrance, color, and texture.

In cannabis, terpenes can aid in the absorption of THC and other cannabinoids to help them find their way into the body’s receptors to deliver what scientists and researchers are calling building blocks to better health. Without knowledge, finding the right mix of terpenes can pose a challenge.

For the past 18 months, Nevadans have had access to 24-hour dispensaries selling an array of products, all with ingredient labels held to high standards. The list of ingredients on Nevada cannabis testing labels usually includes the top three cannabinoids and the top three terpenes given by percentage. The key is to understand the role each of those terpenes play when they enter your body.

For cannabis to be utilized to its fullest potential, understanding the interaction of cannabinoids and terpenes is essential for those seeking a remedy or healing property instead of just a high.

Do you know what a terpene is and how it can affect your high? Does your cannabis have the terpenes you need?

Nevada leads the way in informing consumers via labeling what is in the cannabis they smoke or ingest, but now there are web sites that give strain recommendations for specific symptoms and a few web sites that give product referrals with what may or may not be the proper terpenes depending on the individual, ailment, condition, or disease they are trying to treat.

The education process begins with the numbers on containers and packages. You don’t have to be a medical cardholder to be medicinal in your thinking and choice of product. While all of the hardcore smokers seek a high THC content upward of 30 percent, not many know what a good terpene percentage is.

Some terpene profiles boast high numbers, often as high as 5 to 10 percent for myrcene and limonene, the two most prevalent terpenes found in West Coast strains. The myrcene percentage is often the key to determining whether the strain is indica-dominant or sativa-dominant. Myrcene percentages can range from one to 12 percent, limonene is less prevalent. A strain that has seven percent myrcene and three percent limonene produces different effects than a strain with seven percent limonene versus three percent myrcene. When myrcene is at a high level, the result is better pain management and sleep time. Smoke enough myrcene and sleep is imminent.

Color can matter and be a guide, not a rule. A dark, purple or red color denotes myrcene and other sedative effects while light green and orange can produce high quantities of limonene which helps with depression and anxiety. When limonene is dominant, a sativa strain is most likely, with hybrids often boasting colorful plumes of orange and yellow.

Take Durban Poison for example, with its bright green leaves speckled with orange and full of oversized terpene glands, as with many citrus strains, it contains a lot of limonene. The result is energy, focus, happiness and even euphoria. The Durban Poison strain originated in South Africa, while the Afghani breed often are musky and more sedative. Purple strains are usually indica strains, which also can be darker buds with a musky scent.

Leafly.com can be used for researching which strains are best by strain name. Some desired effects are listed as well, along with location for purchase. But whether or not the strain is sold as flower or used in oil, it creates two challenges. The choice remains whether to use the full spectrum approach that preserves the entourage effect or use a mix of terpenes from the plant or synthetic terpenes created in a lab. Many consider the man-made way inferior while others claim there is no difference in mixing synthetic terpenes together.

Buried in the same cannabis glands that produce cannabinoids, terpenes are essential oils that flavor and enhance the plant. Researchers have found nearly 200 distinct terpenes in cannabis plants.

Terpenes are volatile (see turpentine), aromatic oils that affect receptors and neurotransmitters in the brain. Researchers want to determine exactly how each terpene works and how they play off each other. Such knowledge will help treat specific illnesses with pinpoint dosage. A medical patient with an autoimmune disorder might need a different strain than a migraine-sufferer, while those with too much energy would benefit from a far mellower strain than someone lethargic.

The Israeli Agricultural Research Organization claims to have performed terpene research under the title “aromatic compounds” for the last 50 years. “Our station delivers a multidisciplinary approach, doing research in agricultural, biochemical, ecological, analytical and genetical subjects. This great experience enables us during these years to work on plant breeding, agro-techniques and physiology,” the organization states. “We study the factors affecting essential oil yield.”

This research and other studies have helped profilers formulate mixtures. A study conducted by the University of Siena in Italy found “the synergistic effect between cannabinoids and terpenes is often claimed to be the major difference between ‘holistic’ herbal preparations of cannabis and products based on single cannabinoids.”

A 2011 report in the British Journal of Pharmacology found that the complex interaction between terpenes and cannabinoids like THC “could produce synergy with respect to treatment of pain, inflammation, depression, anxiety, addiction, epilepsy, cancer, fungal and bacterial infections.”

Scientists are now out to prove terpenes are important rather than just abstract speculation. Researchers are investigating if reactions between terpenes and cannabinoids produce effects that would be beneficial for cancer patients and chronic illnesses. Scientists are also developing ways to manipulate a mother plant’s terpene profile.

Rachael Maddison has poured her time, brain power and determination into a cause she knew nothing about. Three years ago, Maddison’s sciatic and shoulder pain became so unbearable she tried something she, until then, had held as unthinkable: cannabis.

Suffering from a shoulder separated during childbirth and the accompanying sciatic pain, she first turned to chiropractic and acupuncture, to no avail. When researching pain remedies, CBD and cannabis kept popping up, offering help that opposed her views that weed is bad, reinforced by a husband who is a police officer.

“He was all for it because he saw how much pain I was in,” Maddison said of finally deciding to give it a try. Then it came down to finding the right product. She spent eight months probing medical and cannabis consultants. Finding that her questions weren’t being answered, she decided to become the answer instead of the question. She developed an algorithm for a site called strainconnect.com that combines and measures data derived from her research.

She used her tech background in UX design and information architecture to create an organizing and designing algorithm that is intuitive. Maddison designed her PC and phone app strainconnect.com to determine how terpenes interact with cannabinoids to show the type of product needed.

“Building the app took a year of research talking to neuroscientists and bioscientists and doctors who use cannabis in their practice and using all the studies out there,” Maddison said of strainconnect.com, which provides a solid resource for budtenders as well as individuals seeking help navigating the world of terpenes.

Currently, she is only recommending CBD and terpene mixes while navigating the laws of the nation and California to operate legally. “The name (of the site) is a little bit of a misnomer but that’s how people see cannabis is by strain,” she said. “We care about the cannabinoids and terpenes. When I started, there were no platforms for that.”

Maddison’s strainconnect.com platform can be used anywhere but the recommendations it serves up are from companies that sell in California. She currently refers 35 brands. “Brands have to apply to be part of our platform. For product lab results for some brands I was surprised how beautiful their information is,” said Maddison, who is constantly updating test results to provide a more personalized recommendation guided by the need for certain terpenes. “The problem with CBD companies outside Nevada is the content of the product may be falsified. That’s why we do the vetting and we are particular about who we add for recommendations. It is scary as to what products are out there.”

Then, the time of day for use is queried, followed by how you want to feel, with such choices as active, aroused, calm, creative, energetic, focused, hungry, relaxed or sleepy. Next, a response is required for a description of who you are – active, aggressive, addictive, angry, anxious, assertive, calm, confident, energetic, excitable, insecure, lazy, low energy, moody, paranoid, passionate, sensitive, sociable, stressed, talkative and/or timid.

Finally, you are given a terpene product, CBD oil or hemp oil to choose from – with the ingredients identifying what terpenes are helpful by clicking on the product recommended. Purchasing is the last option on the app with a selection of products that include both natural and synthetic terpenes. “We don’t distinguish between the two,” she said. “A molecule is a molecule and that’s the way we are treating it. To a scientist, a molecule is

With continued education, scientific research and technical innovation, the quest for understanding and finding the best terpenes to use most effectively will only continue to fuel cannabis’ power of healing.