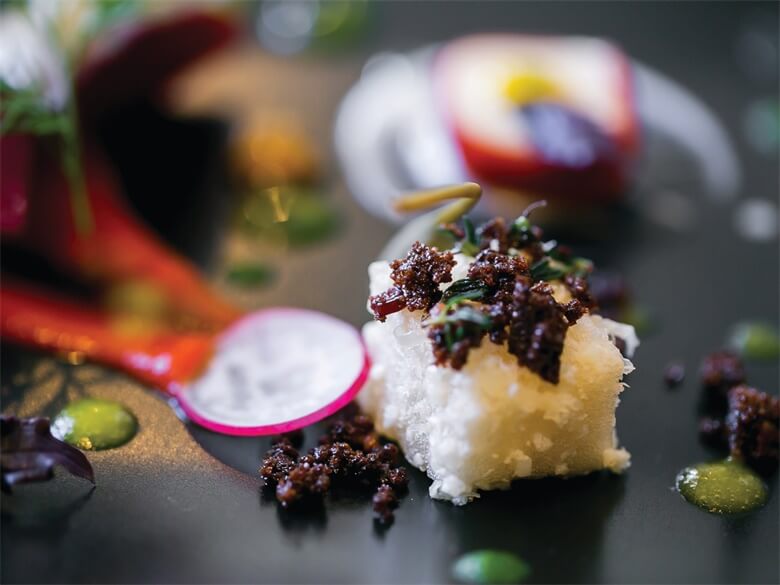 Where have all the scientists, artists and adventurers gone? Where are the great thinkers, philosophers and explorers of the 21st century? It appears they are in the kitchen.

Like a pink flamingo, she stands on one leg at the edge of a long, stainless counter. It has been hours of painstaking and tedious work. Strands of hair dance about her head, while others adhere themselves to her face and neck, dampened with sweat. She wears the uniform of a chef -- a pair of baggy, hound’s-tooth trousers, heavy black clogs, and a white double-breasted coat under which is a lacy camisole. She works in a stark, immaculate room. Windows line one entire wall. She does not notice the rays of sunlight or the hummingbird that flits outside among meandering trumpet vines.

Stacks of books are piled to her right, several sit open. Some display stains, all are heavily marked with notes. There is only the hum of the hood fan. Arranged along the opposite end of the counter, are a few recognizable tools -- funnels, bench scrapers, squeeze bottles, and iSi whippers. There are also other tools and pieces of equipment less familiar: a sous vide, siphons, syringes, a smoking gun, and a spherification kit.

Her first two years of college were focused on chemistry and physics. It was while spending a summer in Paris that food drew her attention. Drawing inspiration from the alchemists she had studied during her years as a chemistry major, she integrated the two fields. Not yet widely known, those who have cooked in her kitchens consider her one of the most talented and brilliant culinary alchemists they’ve worked with. After enrolling in culinary school, she supplemented her knowledge and experience with information and experimentations shared by Cook’s Illustrated editor and chef Christopher Kimball. Cooking her way through each issue, she quickly learned how to hypothesize, test and solve the most trying of culinary problems and mishaps. Often making new discoveries and developing methods of transmuting the most mundane of dishes into the extraordinary. But it is the founder of molecular gastronomy, chef Hervé This, to whom she has now hooked her collapsible grocery wagon.

This “Florence-Buddingale” of edibles has concocted and incorporated foams, gels and vapors into the most unsuspecting of infused foods. She has smoked a rich, smooth canna-butterscotch gelato with mesquite. Our science-centric chef has presented a table of ten with an appetizer of canna-caviar made from a combination of matcha tea and cannabis. Injected frozen fruit bars with cannabidiol and in a grand gesture of appreciation for what she’d learned from the study of alchemy -- garnished chocolate mousse with edible gold and a dusting of keif.

Guests fortunate enough to be invited to sit at the table of this chef will experience pops and sizzles on their tongues. They begin salivating while watching with glee as swirling vapors dissipate, revealing a resplendent ceviche beneath. Edibles prepared by chefs of this scientific caliber offer a multi-leveled sense of euphoria.

A bearded man stands tall and unmoving. His eyes fixed, arms crossed in front, displaying abnormally large forearms decorated in tattoos he’s accumulated over the years, most of which depict his passion for cooking. The assistants standing beside him know better than to disrupt him when he is deep in thought. This chef has developed a reputation for creating edibles that are both atheistically pleasing, gratifying to the palate, and medicinally effective.

Heavily influenced by innovators that include chef Massimo Bottura, famous for incorporating artwork into food creations with works such as Beautiful Psychedelic Veal and Caesar Salad in Bloom, this young chef seeks to make his own mark. He seems to possess the natural gifts of the Great Masters -- Da Vinci, Raphael and Titian with a good dose of graffiti artists such as Tyler Ross, Kick Rock and GIRAFA mixed in.

Blending his talents in pastry and gardening, the edibles he prepares are lively and effective. For example, the culinary lavender he harvested and served as garnish against a gleaming white infused panna cotta, accompanied by sugared rose petals and a smattering of homemade granola for contrast in texture, received glowing praise from a group of musicians.

On another occasion, our artistic chef expressed his own gratitude at being one of the featured canna-chefs for an art gallery opening by preparing a deconstruction of an old family favorite, strawberry shortcake. He showcased gigantic garden-fresh strawberries, fanning them out like the feathers of a peacock. Canals of infused honey-sweetened mascarpone were nestled between the berries and rounds of vanilla shortbread. Droplets of infused-strawberry compote provided accent. The gallery curator was so impressed with the simplicity and natural beauty of the dessert, she arranged the plates of the American favorite directly beneath artist Jerry Lofaro’s Unexpected Growth.

Today, chef contemplates how to “paint” a selection of infused monochromatic displays on the three blank canvases of plain white platters sitting before him. Having just come in from the magnificent garden outside his restaurant, he considers the elements: earth, wind and fire. Amid the silence surrounding him, he is struck with an idea. One platter will represent earth with foods of brown tones: roasted russets stuffed with an infused wild mushroom ragu. The other canvas will represent wind with infused transparent strands of pasta, twisted into a tangled frenzy of tantalizing deliciousness. The final platter symbolizing fire will be painted with a background of infused white polenta coated with a swath of spicy Arrabbiata sauce. Chef announces his vision and he and his staff get to work.

Chefs like this put the art into culinary art. Using an amalgamation of techniques, concepts and emotions when preparing food, they seek to address each one of our senses individually and wholly. They know we first eat with our eyes. Then there is touch. Many of us poke at our food perhaps with only the tip of a finger, but we feel an unexplained urge to ensure our visual perception is accurate. This also has to do with texture. Chefs are aware texture is a factor in measuring how much we enjoy or dislike a dish. All of us lean in to inhale -- allowing the aromatic properties of a dish to envelop us. Then, as the fork delivers that first tasty morsel onto our palates, if the chef has done their job as intended, we are transported. Artisan chefs offer us the opportunity to be swallowed into a technicolor whirl of tastes, textures and scent. Our sensorial experience is complete because we have been shown: food is art.

Like those restless explorers from days of old, the most exciting among chefs are those adventurers who cook and eat outside the norms. Chefs of this caliber are adept at using the practices of old, the traditions of family and cultures, and turn them on their fiddlehead. Integrating exotic ingredients with home-cooking styles, they create contradictory yet complementary dishes. With knife bag in hand, these chefs scour local farmers markets, alleyways, and side streets in search of their next new taste sensation.

Today, chef has decided to raise the bar for a canna-cocktail party hosted by one of her high-tolerant clients. The client’s excitement about the strangeness of foods she has prepared for him in the past prompted this host to forewarn his guests NOT to ask what the infusions are, just eat them. Chef’s cooking has taught him, he may not always know what he’s eaten, but the dining experience always leaves him ebullient and in a postprandial pleasantly stoned state.

Having just returned from a trip to Puerto Rico and enjoying her childhood favorite of membrillo (quince paste) and manchego, our adventurer chef has decided to infuse umeboshi (paste made from pickled plums). This will be served alongside manchego. Keif will be sprinkled onto fried sea stars served on sticks like giant edible lollipops. Adhering to her theme of street food of other countries, chef is preparing snowcone containers of chapulines (fried grasshoppers) sautéed in canna-oil and seasoned with salt, pepper, chili powder and more keif. “My guests will eat these by the handfuls like popcorn!” exclaims the host. Another adventurous infusion chef has concocted is a play on the Chilean Completo or hotdog -- infused guacamole, diced tomato and mayonnaise (yes, infused) stuffed inside a soft hotdog bun. Chef and staff are certain tonight’s array of foods will catapult every guest from their chairs to someplace far, far away.

Meals prepared by chefs who inhabit worlds that spin around science, art and adventure as described above are meant to take us on a journey, give us experiences not usually associated with food. Many chefs, if you are present and open during your dining experience, are telling a story that ignites the senses. Should you find yourself lucky enough to dine at a table of canna-chefs like these, you will not be disappointed. 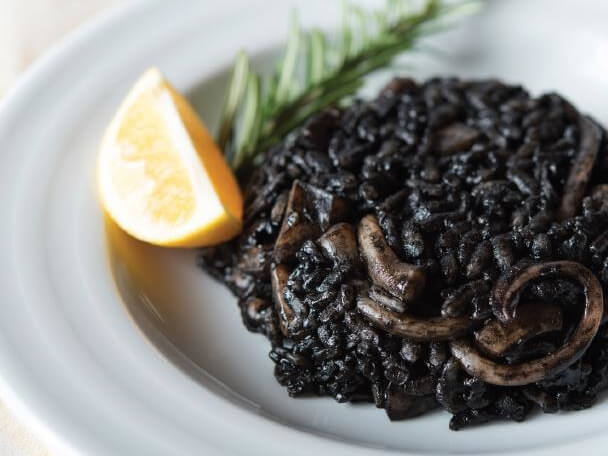 This unusually colored, textured entrée is less atypical than the recipes of our alchemist, artist and adventurer chefs but you won’t be timid about eating it either.

salt and pepper to taste

salt and pepper to taste

Deglaze pan with wine. Allow wine to reduce by half then whisk in squid ink. Ladle ½ cup of warm broth to rice mixture – stirring almost constantly. Continue adding broth; allowing each ladle full to almost completely absorb into rice. Keep stirring. Do this until rice is cooked to desired firmness – about 20 minutes.

When rice is almost done, add a smidge more squid ink until desired color is obtained. Squid ink is salty (like caviar); a little goes a long way.

Add 3 tsp. canna-butter and 2 tsp. infused olive oil to medium skillet. Once butter/oil becomes shimmery, add scallops and squid, along with about 3 Tbsp. water. Cook until seafood is no longer translucent but thoroughly cooked. Do not overcook or seafood will be tough and chewy.