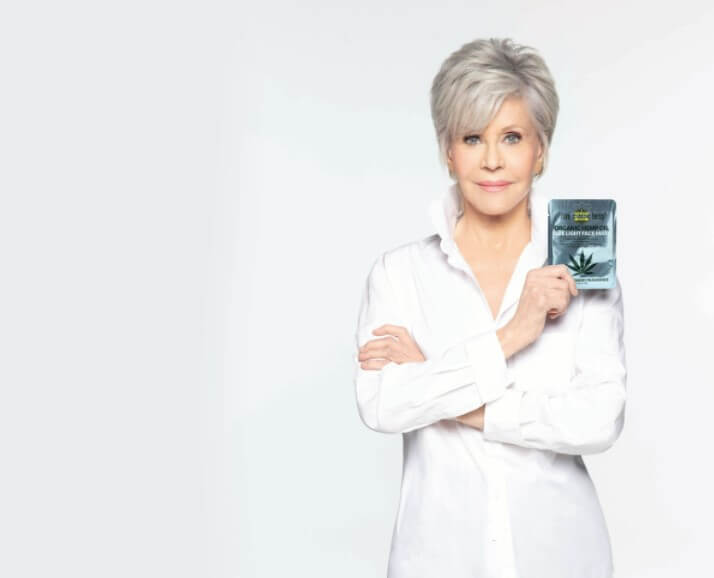 Under the Influence: A wellness influencer since the ‘80s when her workout videos were all the rage, Fonda recently became spokesperson and brand ambassador for cannabis company Uncle Bud. “I have been using a CBD vape pen for some time to help me sleep. My doctor advised me to get rid of sleeping pills, so I use my little pen that controls the dosage and it works great,” Fonda told Byrdie magazine in an August interview. “When we first started talking, Uncle Bud’s sent me some new CBD and hemp products to try. I was a bit skeptical at first, but then I used their masks and body lotion and their pain relief gel and roll-on and I really liked them because they work.”

Rockin’ TikTok: Whether she’s promoting her now-virtual Fire Drill Fridays or giving a wink and a nod to her famous aerobic workouts as a sequestration activity to keep fit, Fonda has embraced the newest social media platform.

Rebel Cred: In 1972, Fonda toured North Vietnam in a controversial trip that would come to be the most notorious part of her activist career, leading to her nickname “Hanoi Jane.” Explaining in a 2019 Vogue interview that it changed her life in “many profound and very beautiful ways. Once you get that in your solar plexus, no matter what the controversy that comes your way, you’re not gonna step back. The more controversy was hurled my way, the more I dug in my heels. I don’t want to go back to meaninglessness.”

I Fought the Law: Fonda has been arrested five times in her 83 years, and, when asked if she’s tired from her long list of accomplishments and activism, she told Vogue, “I don’t feel exhausted. I feel very, very grateful.”

Other Causes Célèbre: Although her ability to channel the zeitgeist began with protesting the Vietnam war, it has continued with environmental issues and ageism in Hollywood. Most recently, Fonda created Fire Drill Fridays in October 2019 after being inspired by the words of climate activist Greta Thunburg who said, “I want you to act as if your house is on fire. Because it is.” Vowing to fight for the climate, Fonda organized weekly protests every Friday on Capitol Hill to demand that political leaders take action to address the country’s “climate emergency.”