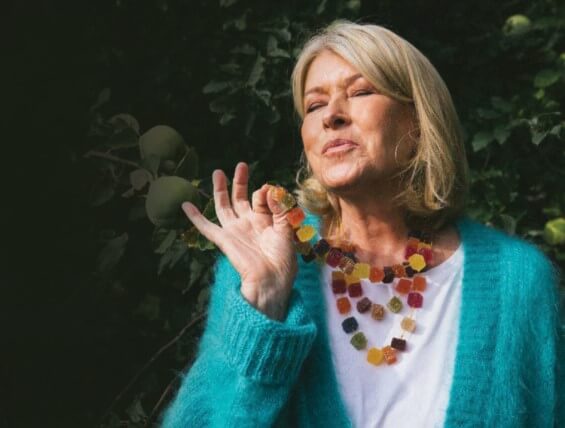 Under the Influence: Last fall Stewart launched a line of CBD soft gels, gummies and tinctures in partnership with Canopy Growth. “I’ve found that CBD supplements are a simple way to enhance my own health and wellness, especially when it comes to managing the stresses of daily life. I set out to create the most delicious CBD products on the market, drawing inspiration from some of my favorite recipes and flavor profiles from my greenhouse and gardens. My wellness gummies closely resemble the French confections, pâte de fruits, rather than the sticky, overly sweet versions you might find elsewhere.”

Selfie Assured: In July the usually demure Doyenne of Domesticity posted a shot of herself in a bathing suit while lounging poolside at her East Hampton home that sent the interwebs into a tizzy. “I was trying to take pictures of my gardens out there. And then the camera automatically went to, you know, selfie mode. I don’t know why,” Stewart told CNN. “And I looked at it and I looked so nice because of the sun streaming down. So, I snapped the picture and I sent it to the internet.”

Unlikely Smoking Partner: In 2016 Stewart teamed up with rapper Snoop Dogg to host Potluck Dinner Party, a cooking/variety/talk show. The premise of the VH1 show featured Stewart and Snoop putting their respective spins on themed meals. After two seasons the show was re-envisioned into a competitive format and renamed Martha & Snoop’s Potluck Party Challenge.

Sequestration Satisfaction: When things shut down in New York City as the pandemic set in last March, Stewart retreated to her 153-acre Bedford, New York farm. “I’m in this kind of horror,” Stewart told Parade magazine of quarantine living in October. “But we have to look for good things. I’ve done so many projects at the farm, all the things I just kind of put off because I worked so hard at the office. I redecorated my entire house!”

Pandemic Perk: The prolific cookbook author (Stewart has written and published 97 books) noted that “people are baking cakes and eating more than they’ve ever eaten before,” she said in the Parade interview. “I think most people have gained weight. I’ve actually lost 16 pounds. I think it’s because I don’t go out to dinner and I’m eating straight from my garden.”