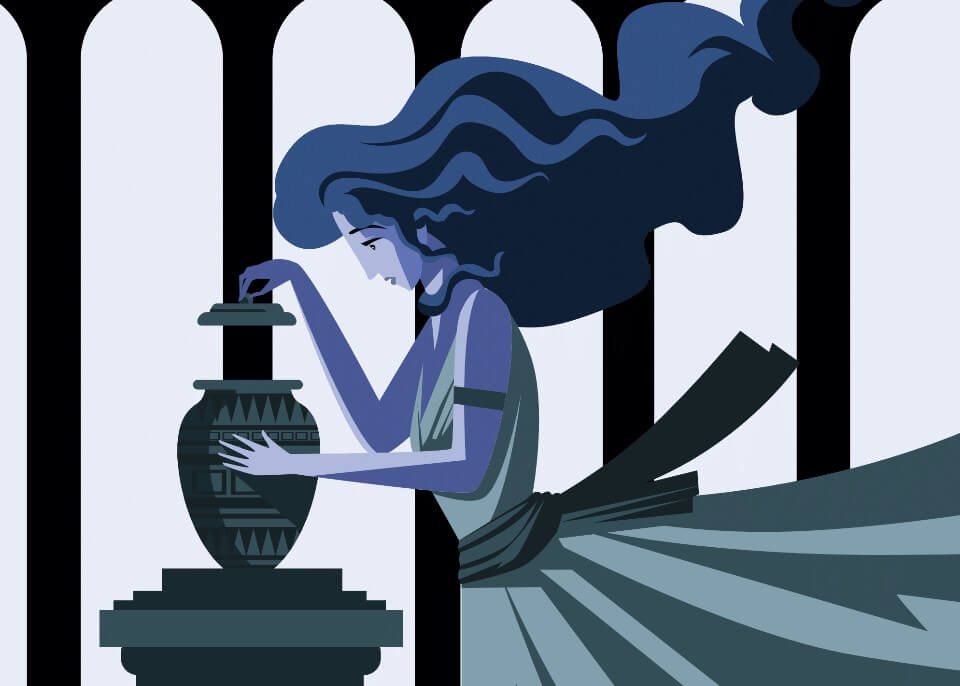 A magical ingredient that lives inside all of us

A magical ingredient that lives inside all of us

She was a gift. One of several elegantly wrapped to please and entice. Her image has been depicted as that of a slender woman, waves of chestnut hair cascading down her shoulders, a plaited crown atop her head. Her skin, a glistening porcelain white like the mists that spray heavenward from the crests of ocean waves. Yards of shimmering blue and gold fabric barely conceal her curvaceous figure beneath. Though artists have painted her through their own perceptions, each show her arms tenderly wrapped around a bountiful bouquet of flowers or a cornucopia of seasonal harvest. With a Mona Lisa-like smile set upon her unburdened face, she was known as Elpis, the Spirit of Hope.

As the story goes, it was the titan Prometheus who was tasked with the job of creating humanity. However, his creations were left in the dark without heat, completely dependent upon the gods, who treated them badly. This caused sorrow and dismay for Prometheus, who voiced his concerns to the other gods. His pleas to give humanity more in the way of basic needs and comfort were ignored.

Taking matters into his own hands, Prometheus dipped a reed into the sun bringing fire to humans. Enabling them to warm themselves, cook their food, and create light when darkness fell. Now, they were no longer subject solely to the will and whims of the gods.

This angered the gods, most of all Zeus. It was decided Prometheus needed to be punished. Thus, he was chained to a rock in the middle of the ocean where a giant eagle swooped down and tore at his liver every day. His liver regenerated overnight but the eagle returned the next morning, and every morning after, lacerating at his liver again and again.

The enraged gods didn’t stop there. They further tortured Prometheus by seeking out his brother, Epimetheus, who, unfortunately, wasn’t as intelligent or astute as his elder brother. Easily swayed and influenced, he ignored his brother’s warnings about accepting gifts from the gods. Instead, Epimetheus eagerly received one of the greatest gifts fashioned by the powerful creators, Pandora, the first human woman. It was Zeus who presented Pandora to Epimetheus to serve as his wife.

Pandora means “all-gifted” and she was. Each god had given her a great attribute. Aphrodite bestowed beauty upon her. Hermes made her bold and clever. Athena instilled in her knowledge, and Zeus, her most pronounced gift, an insatiable sense of curiosity. All traits the simple-minded Epimetheus would find irresistible.

Just days before the wedding, Zeus appeared with a gift for the bride—a large pithos or jar made of clay adorned with ornately painted images and scrolls. A tight-fitting lid secured the contents. Zeus firmly instructed Pandora to never open the closed container.

However, this “gift” was given with deception and malice as part of Prometheus’ punishment. Knowing full well Pandora would open the pithos, Zeus had stored inside the Spirits: Oizys (misery), Kakoi (evils), Nosoi (sickness and pandemics), Lugra (distress and annoyance), the three Fates (death, strife and pain), and finally Elpis, the spirit of hope. On her wedding day Pandora succumbed to curiosity and opened the jar, unleashing the maladies within. Terrified and realizing her error, she quickly slammed down the lid just as Elpis was about to fly out. Hope remained inside.

But why was Elpis placed in the jar? Why include an uplifting spirit among such powerful and malevolent dispositions? In part, this can be explained by the ancient Greeks’ association of suffering with hope. They believed that suffering could be transformed into hope. That only through suffering does hope emerge.

Our modern-day definition of hope is far different. We describe hope as “a feeling of expectation or desire for a certain outcome or object.” Hope is no longer conjoined with suffering, as anyone, of any age, has the capability to call upon Elpis. As a child, I used to hope for things like a new bike or pair of skates. As I matured, so did my hopes. Like hoping my mother wouldn’t hear me come in after curfew. Years later, I desperately hoped my husband, a Navy Seal in the Vietnam War, would come home in one piece. Concurrently, I found myself hoping my dad, a uniformed police officer, wouldn’t catch me marching at the same anti-war rallies he was working. It was during that Make Love Not War era that I, along with thousands of others, hoped for the legalization of marijuana. Was I suffering when I hoped for those things? No, but many others were.

Certainly, I’ve had my share of difficulties, scares and bad times, calling upon hope to lift me up and assist in seeing an event through to a positive and satisfactory conclusion. But the matters I’ve pinned my hopes on pale in comparison to stories I’m told, read or see on the news. I don’t like to see others suffer. Worse, it pains me even more to see the current vastness of poverty, violence, and discord chiseling away at hope.

But what can I, a sixty-something-year-old chef, do? I suppose, if you feel hunger, I can cook for you. Or better, if you don’t know how to cook, I can teach you. If you are in physical pain, I can infuse my food with nature’s medicine and provide you with some relief. But is that enough to bring about hope?

Did the meals I prepared for a couple, who had endured serious physical injuries rendering them unable to cook for themselves, heal them? I can’t say for certain. But I can say the energy and healing intentions, along with the cannabis I infused into each dish, gave them a glimmer of hope as they consumed and savored my medicinally crafted meals.

The cooking classes I taught to the young residents of a homeless facility didn’t provide them with shelter or beds. Yet, I know every one of those young men and women learned how to “make something out of nothing.” Discovering they possessed the capability to create unique and healthy ways of nourishing themselves in whatever living circumstances they may encounter. Yes, I can say my cooking classes have inspired hope.

Do the edibles I prepare for those living with chronic pain, insomnia, PTSD or even terminal illness offer any real cures? No, though I can say without hesitation, the care I take and the thoughts I conjure while preparing those edibles, along with the cannabis, provide real relief. I’ve seen grimaced expressions, furrowed brows, and long creased foreheads dissipate. Replaced with hope.

Recalling how Pandora clamped down the lid of her jar, I realize it isn’t just my infused foods that bring hope to those I cook for. Her story shows us, that Elpis, rather hope, remains within. We are the clay pithos. The misery, sorrows, and illnesses Pandora released can never again be pushed back down into the jar. For each of us is sure to experience nearly all of them during our lifetime.

Yet, I believe, new beginnings, perspectives, and ideas emerge from those bits and pieces of darkness that sometimes cloud the skies of our hearts and minds because Elpis remains inside. And that maybe, just maybe, good food infused with good medicine can indeed ignite the hope within. 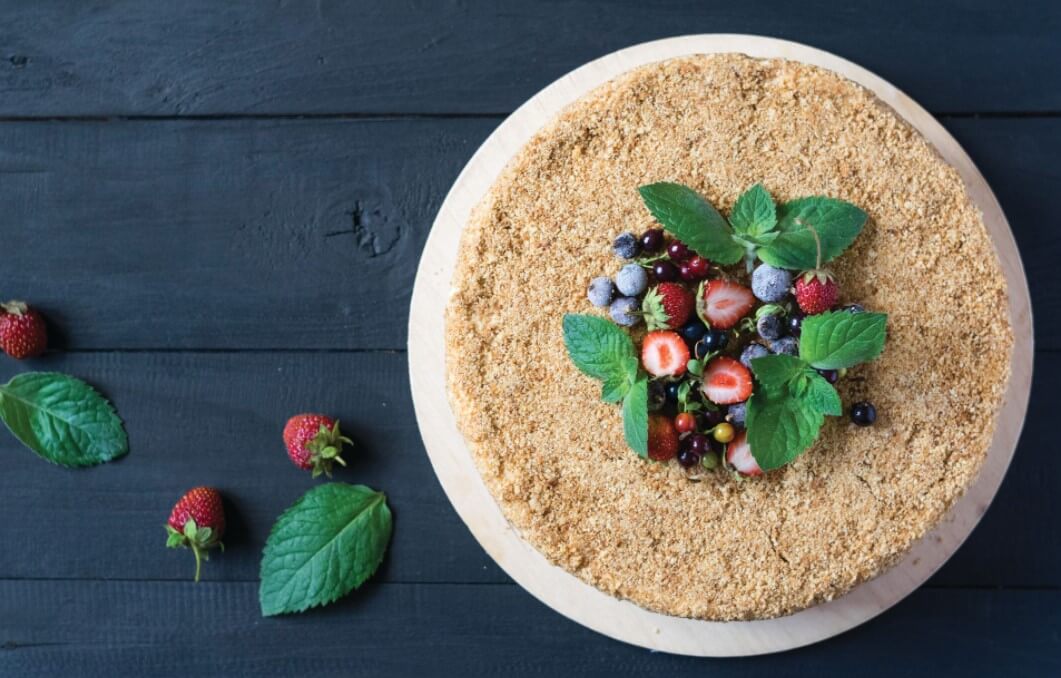 1 Tbsp. fresh thyme + some for garnish

Use 1 Tbsp. canna-oil to grease 9” springform or cake pan. Line pan with parchment paper, then grease paper with canna-butter.

In large mixing bowl, whisk together yogurt, 2/3 cup oil, extract, honey, thyme, and lemon zest. Add eggs, one at a time, whisking between additions. Sift in flour, baking powder and soda, and salt, then stir, using wooden spoon until batter is nearly smooth, with minimal lumps.

Don’t over mix. Allow batter to set for 1-2 minutes.

Scrape batter into prepared pan. Bake 40-45 minutes or until top is golden brown and inserted pick comes out clean.

Transfer cake, in pan, onto cooling rack for 7-10 minutes. Remove from pan and allow to cool another 5-7 minutes. Meanwhile, rinse and/or slice choice of berries.