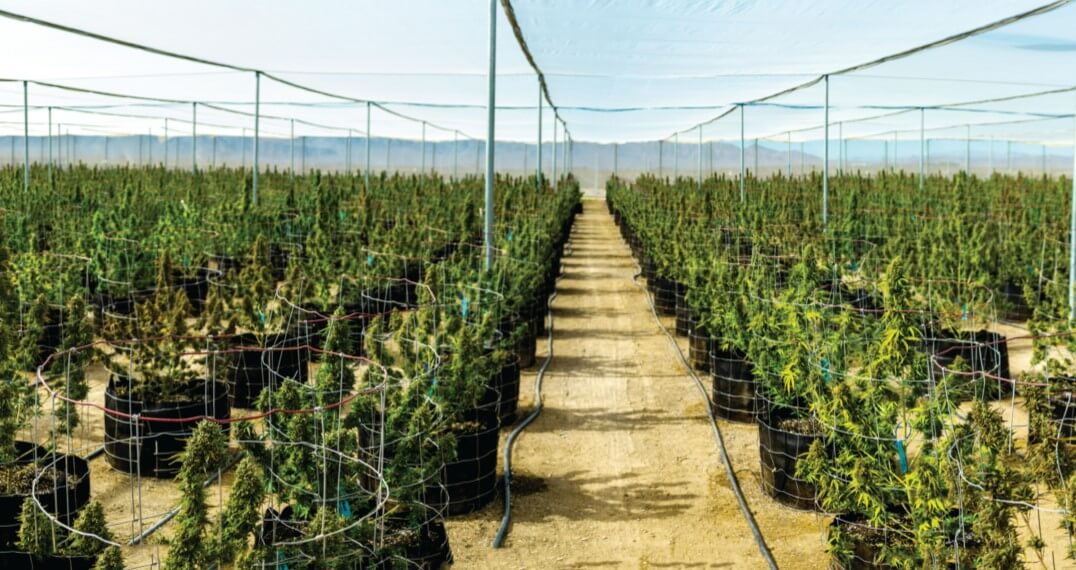 Who on earth, besides Mother Nature, of course, would think it a good idea to grow cannabis in the desert? Either someone who was just a little bit crazy or someone who had innovated solutions around the obvious environmental challenges indigenous to a desert clime. Between the obvious heat and water-barren land, Southern Nevada’s Mojave Desert would not seem to offer prime conditions for cultivating cannabis outdoors. Yet, there is a cannabis company that has staked its claim to grow cannabis in the heart of the Armargosa Valley.

Located approximately 88 miles northwest of Las Vegas in Nye County, the Amargosa Desert is sandwiched between U.S. 95 to the north, and the California border to the south. It would seem a fitting place to grow cannabis with Death Valley National Park and Area 51 on opposing sides.

In September, MJ Holdings, Inc. received approval to transfer its recreational and medical cannabis cultivation and production license from its three-acre farm located in Pahrump to The Farm, a 260-acre piece of land in Amargosa Valley. “This milestone marks the beginning of our expansion to becoming one of the largest cultivators in the U.S.,” Roger Bloss, CEO of MJ Holdings, says.

Using innovation, technology, and out-of-the-box thinking, MJ Holdings plans to harness the advantages of outdoor growing—employing the sun, natural airflow, and mineral-dense soil—to benefit cannabis plants. “Mother Nature's going to do over 99 percent of the work. All we're doing is basically just guiding a little bit. And then we might be adding a little bit of light, we might add a little bit of heat, that type of thing,” explains the company’s founder and Chairman Paris Balaouras, who has been growing cannabis for more than 20 years.

Although he has grown cannabis both inside and out, the latter is Balaouras’s preference. “I think that is going to be the true future,” he predicts of outdoor grows. “And that's why we're so excited about it and are doing it this way. It's moving forward but we're actually moving backwards to the way that the plant fundamentally was grown for thousands of years—to actually use the sun and use Mother Nature to get the best result, to get the strongest plant and natural selection.”

You Can’t Replicate the Sun

Balaouras does not consider the cultivation he is building at The Farm to be either an outdoor grow or a greenhouse grow. Instead, he refers to it as hybrid outdoor. “We've built a system using material that cuts out some of the actual harsh rays from the sun which gives you results that are more of a full spectrum type of extraction,” Balaouras explains. “When you start taking too many things away then you get less of what Mother Nature can give you. So, in comparison to an indoor grow, where you have manufactured lights or lightbulbs, you're not getting full spectrum because it's not a full spectrum lightbulb. No one's made that up yet. No one's going to copy the sun.”

Additionally, the presence of bountiful sunlight and heat reduces the need for synthetic fertilizers and pesticides, and it inhibits parasitic growth. “In the desert when you're getting up to 115° that plant can handle it. Number two, there's benefits from the sun that you would never get in a regular indoor grow as far as pest control, as far as mold, yeast—it won't grow. You won't see those type of things out in the desert,” Balaouras says. “Unlike in Florida where you have relative humidities in the 50 or 60 percent range, you're going to get a lot of all those things, you're getting a lot of bugs, you're going to get a lot of mold, yeast, and fungus. Whereas in the desert, you're just not going to see any of that.”

One of the most precious components critical to any crop’s success is water. In the case of The Farm, they will be utilizing groundwater from Amargosa Valley’s aquifer, rather than the surface water of Lake Mead. “We have the number one thing that you need after the land, obviously, the water. We have the water rights,” says Balaouras. “Because if you don't have water in the desert then you don't have the water anywhere, you're done.”

MJ Holdings has acquired 180-acre feet of water rights. “Paris bought land that sits on an aquifer. Our aquifer is replenished by rainwater so we are not touching any of the consumer water,” adds Bloss.

It might be a bit hard to fathom, but the Mojave’s three-digit temperatures are an advantage to a cannabis cultivation. “The sun is a disinfectant,” offers Balaouras. “The sun is actually a pest control. When the plant is growing at its peak vegetative state, it's 110° out there and the relative humidity is less than 10 percent so mold can’t grow. And in talking about spider mites and different pests, they can't function in that heat.”

The desert’s wind-driven blow dryer effect is another helpful component to the growing process. “Because you're getting full spectrum sunlight, you get that full air exchange. You don't have 30 rotation fans in a room trying to pull out air and moving it around, you've got full air and we’ve always got a breeze out there. The plant loves it,” Balaouras enthuses. “Mother Nature's doing 99 percent. You're not hand watering, you have a watering system, you've got feeding systems. You’re basically just taking care of the plants, your de-leafing so they get a better airflow underneath the plant and that helps it along.”

There is one downside to the heat—the human element. “The only negative thing is that it's hot. As soon as we get over a certain temperature, we just pull our people off. We don't want people working when it spikes right in the middle of the summer, it's just a safety situation at that point,” says Balaouras.

“I think the biggest challenge, and one we knew about, is manpower. You need people. After our 2018 harvest, which yielded approximately 5,400 lbs. of cannabis, we came to realize that we would need to find a more efficient method of bringing our cultivation team to our facilities every day,” Balaouras explains. He adds that “it takes a special kind of person that likes that lifestyle, too because you don't want to be traveling back and forth every night especially after a long day. So, you really need that person that just loves the whole idea of growing in the desert and loves cannabis.”

Bloss chimes in. “I love what Paris decided to do. He went out and bought a former housing park, which they converted into an RV park, which we're going to convert into a tiny home community to house our workers.”

MJ Holding’s tiny home community (THC) being built for employees is located a few miles from The Farm and will also include a clubhouse, indoor pool, market, and hemp genetics lab. A video outlining the community is available for viewing at mjholdingsinc.com.

Naturally, based on using so many components courtesy of Mother Nature it is more cost effective for a hybrid outdoor grow to cultivate cannabis compared with an indoor grow. “Over those grows that we’ve done, we’ve learned how to make it even more cost effective. If you think about it, you're heating indoors with a 1000-watt light or higher, and you’re pounding that plant and you're increasing the temperature. You have to bring in massive HVAC systems to cool it down. So, you're building up, that's even stranger to me, then you're having to cool it down. Then while you're heating it up you're watering it, which increases the relative humidity massively because that's how the plant breathes. Then you’ve got to do something about that humidity because once it goes too high than the plant can’t absorb and uptake water and nutrients.”

A hybrid grow does require electricity. “You've got pumps and you've got some supplemental lighting. You've got some electronics, cameras. So, you definitely have electricity, but not nearly the capacity that you need to grow indoors,” explains Balaouras.

Balaouras has already completed two growing seasons using a three-acre hybrid environment in Pahrump in anticipation of eventually setting up shop at The Farm. Those trial runs allowed him to find out which strains were most adaptive to the temperatures and low humidity levels native to desert environs.

“We've actually taken those two grow trials to figure out which strains worked in that environment the best. We've tried strains in different ways here in Nevada and then we've added another 10 to 15 different strains to that selection because you also want to keep adding strains to your toolbox,” says Balaouras. “They (the plants) can grow massively, by the way, they can be as high as seven or eight feet in a grow season.”

Balaouras is also pleased with the terpene results he is getting. “We're getting better terpene profiles than most people out there. The results are on the COAs (certificate of analysis) are measurable results we can show people.”

With all of nature’s components in place and two trial harvests under his belt, Balaouras and his MJ Holdings team already know they will be able to have two harvests each year at The Farm and are hopeful they may get three. As far as approximate yield by the pound, that has yet to be determined.

“The advantages of The Farm, including excellent soils, organic growth, and company-owned water rights as well as key advancements in our core team have brought forth prospective opportunities to forge partnerships with unique companies in the Nevada industry,” says Balaouras, who adds, “we’ll definitely be growing this year. Soon we will start cracking seeds and bringing mothers up.”