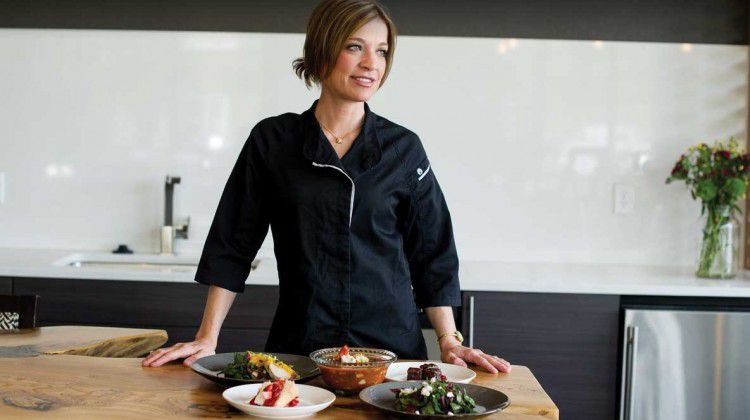 “For me, it’s about helping people,” explains chef Melissa Parks. “It’s this beautiful harmonious kind of coming together of science and food. They really balance each other out because you can add a certain herb to a certain extraction at a certain potency and it will be consumed by a patient to enhance or combat a symptom.”

Parks, who is the executive chef for local edibles company Vert, found her interest piqued by cannabis after being approached by friends to make cannabis-infused edibles to treat health issues including various lymphomas, breast cancer, and PTSD.

“I had no experience with it,” the 36-year-old Le Cordon Bleu graduate says of cannabis when her friends approached her about it. “I decided to dive in head first because I love helping people and I also love producing good food.”

Diving in head first for Parks meant attending every conference or seminar on the subject she could find and joining as many groups as she could that were related to cannabis as well as eventually giving up her lucrative business as a private chef. During that time period she started working for an edibles company where she learned the ropes. “I Googled one of the top edible companies in Colorado and I walked in there with 12 un-medicated samples of baked goods with my pink chef coat on and offered to work for free because I didn’t really know what I was doing or where I was going with this.”

A week later she was hired and the company taught Parks everything there was to know about cannabis. “They gave me a base from which to learn about the plant, to learn about the science of, or the beginning of how many scientific methodologies there are to understanding this plant,” explains Parks whose work history has included everything from R&D at General Mills to working on an organic farm in Colorado.

As easy as it was for Parks to find her way into the cannabis industry, it was a different story when she had to tell her parents about her career shift. “I shouldn’t have been, but I was nervous,” she said of phoning them with the news. “I told them, ‘I took a job as an edible chef.’ And my mom asked, ‘Isn’t all of your food edible?’ I said, ‘Well this is a little different, let me explain.’”

Although her parents were a little skeptical at first they came around. “With my dad being a doctor and my mom being a registered dietician, they both understood why I was doing it and my drive behind it, medically speaking, and they supported me.”

Not only did they support her, Parks’ father helped her. “My father has a Ph.D. in chemical engineering so I worked with him specifically on dosing. When you have this wildly educated father who can help you through some of the chemistry, and the distribution and breakdown of molecules, it’s nice.”

Translating all of that chemistry to cannabis and cooking is simpler than you might think. “The secret to cooking, to baking, to understanding it is practice, practice, practice as much as you can and understanding that failure is a part of that process and success is a part of that process. With each thing you have to recognize that it’s all an opportunity to learn and to grow and get to know the science of this and that becomes something that you can own and share with others.”

As for tips she would share with home cooks, Parks focuses on the different methods of cooking with cannabis. “In any recipe you make at home, you can replace fat with a canna-butter or a canna-vegetable oil. You can do an in-home extraction where you are working with cannabis vegetable oil, cannabis olive oil or canna-butter. You can also work with a CO2 extracted cannabis oil. Those two styles of infusion make for different results, they also make for different flavor profiles,” offers Parks. “You also have to know at which point you have a burn off of your THC. It’s up to the chef to keep their cookies or breads or pasta at that certain temperature and if you go above that, you have to recognize that there is going to be a burn off rate of THC, meaning you could burn off some of the milligrams in there.”

Parks also warns of understanding dosing and being aware of altering the flavor, texture and overall outcome of what you are making but, most importantly, reminds home cooks just to have fun. “I take this stuff so seriously and probably to a fault because I am very stringent on my recipe development and dosages,” concludes Parks. “I have to remember to find the find fun in the industry as well, and keep a beautiful vibe in the kitchen.”